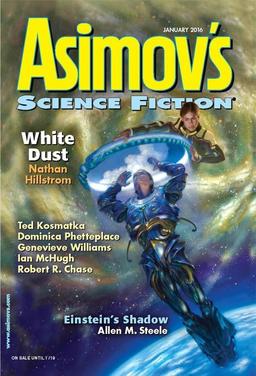 The January issue of Asimov’s Science Fiction contains a big new novella from Allen M. Steele, “Einstein’s Shadow,” plus stories by Ian McHugh, Ted Kosmatka, Nathan Hillstrom, and others — all under a gorgeous cover by Donato Giancola, who painted the cover for Black Gate 15. Here’s the description from the website:

Our January 2016 issue features a tense alternate history novella by Allen M. Steele. Danger, intrigue, and suspense are all aboard a Bel Geddes airliner as it makes an unforgettable transatlantic journey in “Einstein’s Shadow.”

Genevieve Williams ponders the haunting and unknowable alien in “The Singing Bowl”; Ian McHugh takes on a different set of provocative and nearly unfathomable aliens in “The Baby Eaters”; while Robert R. Chase offers us human and inhuman perspectives on “Conscience.” Brand-new author Nathan Hillstrom debuts in Asimov’s with a terrifying tale of “White Dust”; Dominica Phetteplace speculates about the mystery of “Atheism and Flight”; and Ted Kosmatka investigates the startling consequences of “Chasing Ivory.”

Non-fiction this month includes Robert Silverberg’s Reflections column, which invokes ancient Norse myth and the Twilight of the Gods in his reminiscence about “Fimbulwinter 2015”; James Patrick Kelly’s On the Net looks at “The World of Series”; Paul Di Filippo’s On Books reviews a Mike Ashley anthology of tales by early women SF writers, as well as works by Alan Smale, Ken Liu, and the Strugatsky brothers; Alvaro Zinos-Amaro & Paul Di Filippo offer a Thought Experiment about “Pushing the World in a Certain Direction and other Acts of Submission”; plus the annual Readers’ Awards’ ballot and Index, poetry, and other features.

Sheila Williams editorial, “All the News that Fits,” talks about the brand new Asimov’s website, and encourages voting in their Readers’ Awards Polls.

The December issue went on sale December 8. It will be on sale until January 19.

We last covered Asimov’s SF here with the December 2015 issue.