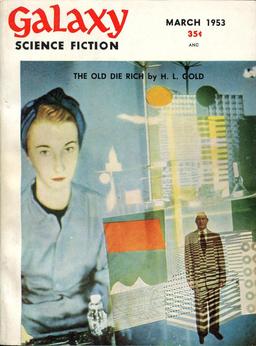 I’ve already covered the $6,500 novel-writing sham announced in this issue in a previous post. So let’s jump straight into the contents.

“The Old Die Rich” by H. L. Gold — Periodically, senior citizens are dying of starvation, yet they have large sums of money in banks or in cash. Mark Weldon tags along with his friend, Officer Lou Pape, whenever the police find out about the incidents. Mark’s intrigued by the circumstances and feels compelled to understand the pattern, even if it’s a matter of being too fearful to deplete their savings.

Mark’s investigation leads him to May Roberts, a young woman who hires seniors for unspecified purposes. He tries to break into her apartment at night, only to be captured. She decides to use him as her latest employee.

The job is to travel into the past and place bets on known outcomes or invest in the stock market at key moments. Mark slips from one time period to the next, spending a varying amount of time in each destination. But anything he interacts with in the past, such as food, can’t come forward to the present with him; it ages as though it’s still part of the past, becoming dust.

Gold’s story has good pacing, but I couldn’t get past his rules of time travel. If someone moves into the past and can’t eat because anything ingested becomes dust, then how could someone breathe? It didn’t seem reasonable to me.

“Games” by Katherine MacLean — Ronny plays outside, imagining a Native American battle scene. Except that as he’s acting it out, he becomes one of them. And then he becomes an old man, dying of starvation — someone who refuses to give information to those who’ve held him imprisoned. It’s frightfully real for Ronny, and he doesn’t understand how it’s happening.

This is a story that seems borderline science fiction. MacLean uses an explanation of ESP for Ronny’s experiences. But really, how far from magic is ESP? So for me, it read more like an interesting fantasy story.

“Student Body” by F. L. Wallace — The colony on Glade awakens without any clothing. Dano Marin, the biologist, begins investigating. Biological Survey had marked the planet as hospitable to humanity, more so than any other planet discovered. But perhaps that was a mistake; after all, something had eaten their clothing. Marin begins to find new species on the planet that weren’t in the previous report, which is unnerving, given that Biological Survey never made a mistake. At least, not until now.

I enjoyed the suspense in this story. I had somewhat of an idea as to where it was going. I think the ending would have worked better if it wasn’t trying to hold out for a zinger in the last sentence — one that most of us would probably see coming in the paragraphs building up to it.

“Secret of the House” by H. H. Holmes — Kathy’s husband raves about the cuisine from Venus, as only an interplanetary gourmet would. He’s exceedingly critical of her cooking until she decides to do something about it.

I didn’t really like this story. To me, it wasn’t much more than an episode from a 1950’s TV show with some references to Venus.  t really felt like something old and out of touch, which isn’t that typical of stories in Galaxy.

“Secret of the House” wasn’t written by the serial killer of the same name. H. H. Holmes is actually a pseudonym for Anthony Boucher. Boucher and J. Francis McComas began The Magazine of Fantasy & Science Fiction, one of America’s longest running speculative magazines.

“The Drop” by John Christopher — Captain Newsam has a break before his next run, so he relaxes on Mars. He tries to track down one of his friends, but everyone is quiet about him. Soon, he finds out that his friend was classified as a misfit and exiled to Earth. It wasn’t due to insanity, but a calculated effort to go against the State.  But a group has an interest in rescuing him, if Newsam will help. It’s a risk to do so, of course, since Newsam might find himself dropped onto Earth as a misfit.

This has a good feel to it — a mystery on Mars along with a controlling government. Nice read.

“Horse Trader” by Poul Anderson — Auch negotiates the exchange of technologies between Earth and other worlds in the galaxy. Not all of the exchanges involve Earth directly, but Earth’s moon is the only place in the galaxy to trade. Earth’s prestige comes into question, however, when one of the technologies is stolen. Unless Auch can find the thief, the balance of technologies between alien cultures may shift drastically, and the moon may not be the destination for exchanges going forward.

This was my favorite story in the issue. I love Anderson’s creativity with the aliens. And he does a good job of throwing the reader off the scent as the mystery unfolds.

Matthew Wuertz’s last retro review for us was the February 1953 issue of Galaxy Science Fiction.

I am not a fan of the “camerage” covers, though this one does a nice job of illustrating the featured story.

I also had a hard time with “The Old Die Rich.” Any time travel story is going to have some scientific problems or paradoxes, but I can usually accept them and enjoy the story anyway. Not this time. Food can’t be transported from one time to another…? Nope, not buying it. The mystery of why the employees are starving should lead to a thoughtful A-HA! moment, not a technicality that is fraught with problems.

“Games” was also forgettable for me. I suppose Ronny can learn a little bit about adult perspectives from his experience, but I am not sure how or why it happened. Empathy is a nice basis for a story, but let’s develop it a little more maybe?

“Student Body” seemed mostly like an excuse to have people wander around naked at first. The story builds to a predictable ending, which is another cause-based message. Yawn.

I am not a fan of “Ashman’s” smudgy artwork.

Matthew, you description of “Secret” as a fifties sitcom is perfect. Silly, shallow, and predictable. It is SO obvious where the author is headed with this elongated joke. I did smile a few times as I read this, but I think this story belongs in Imagination or one of the other C-List magazines.

“The Drop” and “Horse Trader” save this issue from becoming a total waste. Both unfold nicely and make the reader feel like Galaxy still caters to thoughtful adults. Thank goodness. Poul Anderson is definitely the winner this time.

Thanks again, Matthew. I will try to be more thorough next month, but I had a hard time getting motivated to put much thought into this issue. See you then.

Thanks for sharing your thoughts. I agree that it wasn’t one of the better issues.

Poul Anderson can save any issue. 🙂 He’s one of my favorite authors.