David G. Hartwell passed away on January 20th. He was not a fiction writer, but he was nonetheless one of the most respected and influential figures in the industry. He was a senior editor at many of the genre’s most important publishers, including Pocket, Arbor House, Avon/Morrow, and Tor Books, where he edited thousands of books (yes, thousands). He edited The New York Review of Science Fiction for nearly 30 years, and was nominated for the Hugo Award 41 times.

But for me his most enduring contributions to the field will always be his delightful anthologies, of which he produced many. David had a habit of editing sprawling, ambitious books which gave readers new insights into the field. Two of his earliest, released in 1988 and 1989, and co-edited with his future wife Kathryn Cramer, were Masterpieces of Fantasy and Enchantment and Masterpieces of Fantasy and Wonder.

One of the things I most enjoyed about this volume was David’s willingness to include longer tales, including three novellas:

“The Green Magician,” an Incomplete Enchanter tale by L. Sprague de Camp and Fletcher Pratt
“The Last of the Huggermuggers: A Giant Story” by Christopher Pearse Cranch (from 1856)
“The Moon Pool” by A. Merritt

There’s also a smattering of novelettes, including “Operation Afreet,” an Operation Chaos story by Poul Anderson, “Neveryon” by Samuel R. Delany, and “Elric at the End of Time” by Michael Moorcock. 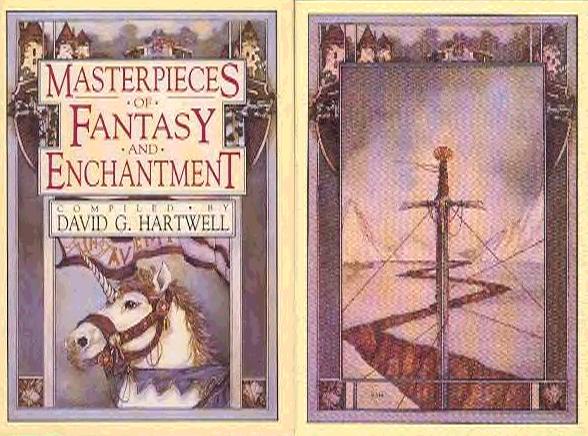 Masterpieces of Fantasy and Enchantment was published by the Science Fiction Book Club in May 1988, and reprinted in hardcover in December 1988 by St. Martin’s Press. It is 638 pages (including the introduction), priced at $6.98 for the SFBC edition. The cover is by Thomas Canty. 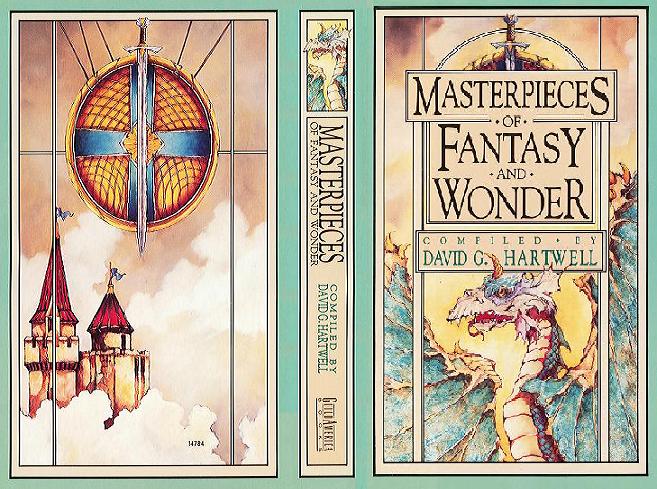 And here’s the TOC for the companion volume, Masterpieces of Fantasy and Wonder, including three short excerpts from J. M. Barrie’s Peter Pan novel The Little White Bird, a Liavek novella by John M. Ford, two Dying Earth novelettes by Jack Vance, a Traveller in Black novelette by John Brunner, and a novella by Graham Greene

Masterpieces of Fantasy and Wonder was published by the Science Fiction Book Club in October 1989, and reprinted in hardcover in June 1994 by St. Martin’s Press. It is 672 pages (including the introduction), priced at $7.98 for the SFBC edition. The cover is by Thomas Canty.

We’ve also surveyed the work of several other writers whom we recently lost, including:

Fantasy & Wonder was one of the first books I got when I joined the SFBC circa 1989-1990; it introduced me to a lot of great authors, especially including Brunner.

I picked up a used copy of Fantasy & Enchantment years later at Uncle Hugo’s; still not sure if I’ve actually read it, which I should rectify.

The other big Hartwell anthology that was hugely influential to me was The Dark Descent, coming out as it did in a time when I was reading a lot more straight horror.

I have these and several others of Hartwell’s anthologies on my shelf — what indispensable overviews/surveys of the genre they are! Most pleasant to have met him at the WFC a few years back.

David gave us all his invaluable ear. I only wish I had been able to work with him again, after OTHER NATURE. We talked about it, but I wasn’t finished. Wouldn’t give Dave something not perfect. Too late now.

These. Yes, these. They taught me the name of “Hartwell”. And 10 years later, I was privileged to meet the man and to get to contribute to The New York Review of SF. It was a great and good time.

I love Thomas Canty with a great and fearsome love.