We’re continuing with our look at the extraordinary 40-year career of Tanith Lee, who passed away on May 24th. So far we’ve covered 13 novels and three collections; today I’d like to look at the slender 1979 paperback Companions on the Road, which I think has been unjustly neglected over the last four decades.

Companions on the Road collects two novellas, Companions on the Road (1975) and The Winter Players (1976). Both were originally published as chapbooks in the UK by Macmillan, with covers by Juliet Stanwell Smith (see below). For their US release as a paperback original, they were collected into a single volume from Bantam titled Companions of the Road: Wondrous Tales of Adventure and Quest, with a wraparound cover by Lou Feck (click on the images above for bigger versions).

The inside cover text is what sold me the book, many decades ago now:

Three rode the path together, yet they were not alone…

Companions on the Road

The citadel of Avillis had burned through the night with its terrible Lord and his monstrous children in it. Nothing remained now but waste, ruin and, at the heart of the palace, the great cup of Avillis, still untouched.

Untouched until borne away by Kachil, Feluce, and Havor. All too soon they would taste of unquenchable fear, unknowable Fate… and of the essence of the Chalice that, once stolen, could not be lightly cast aside, even in horror and despair.

Companions on the Road has never been reprinted, and it has now been out of print for 36 years. It was published by Bantam Books in July 1979. It is 183 pages, priced at $1.95. The cover is by Lou Feck. There is no digital edition, but used copies are available online for less than the cost of a new paperback.

Companions on the Road was the first book by Tanith Lee that I read and it instantly got me hooked – it’s a very atmospheric work and is quite dark for what was originally intended as a children’s book.

With regard to a reprint, there’s good news and bad news here – the good news is that Gollancz have recently released ebook versions of both Companions on the Road and The Winter Players under their SF Gateway imprint. The bad news is that they don’t hold the North American publishing rights to the works and they are not currently available for sale in the USA or Canada. Nonetheless, if you aren’t caught up by these territorial restrictions, they are highly recommended:

I do love that US cover — at first glance, I thought it might be another Sanjulian.

I know I have that edition; I’m just honestly not certain if I ever read it. As always, must rectify.

I like those Macmillan UK editions. I found the US edition years ago, without even knowing the two novellas existed. I always feel a bit bad that “The Winter Players” is rather obscured by the US edition, which does not refer to it in the title or on the back cover, though it does provide a teaser under “The Ring, the Jewel, the Bone”.

> Nonetheless, if you aren’t caught up by these territorial restrictions, they are highly recommended

Thanks, Prime_Evil. Although I admit I’m a little annoyed that Gollancz is selling the novellas individually, for $4.99, which seems a lot for such short works. Still, they’re the only game in town if you want an e-book version.

> I do love that US cover — at first glance, I thought it might be another Sanjulian.

I thought the same thing. I would have sworn it WAS a Sanjulian, until I double-checked this morning.

I’d never heard of Lou Feck, but I should have. He’s done some really memorable work, especially for the early Star Trek paperbacks. Not to mention A Canticle for Leibowitz, and my favorite Ed Bryant cover. Here’s a few samples of his work I dug up today: 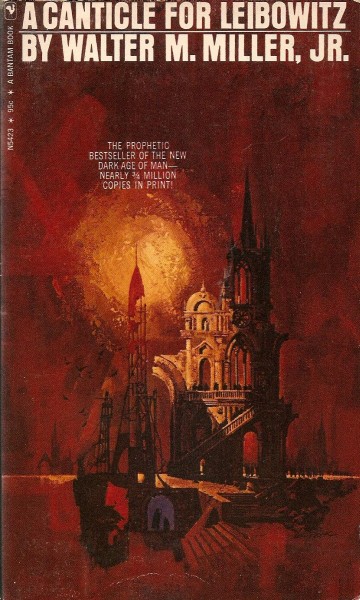 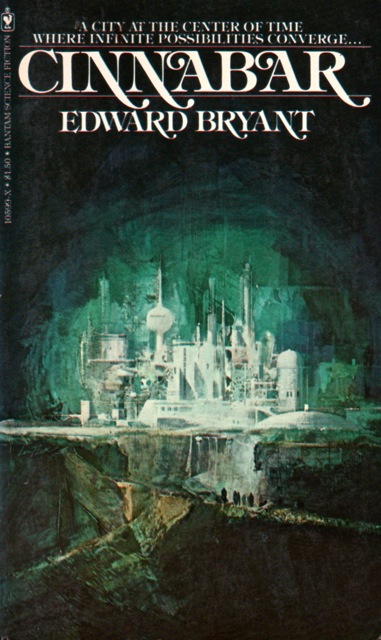 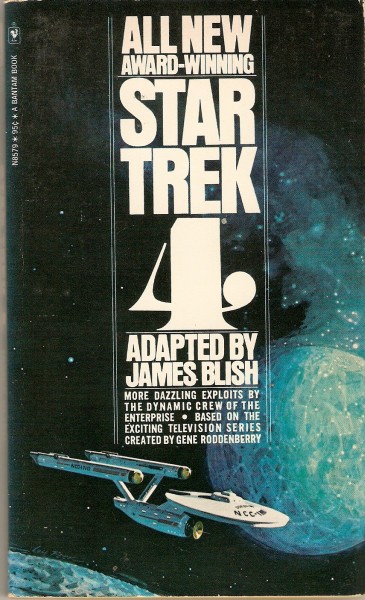 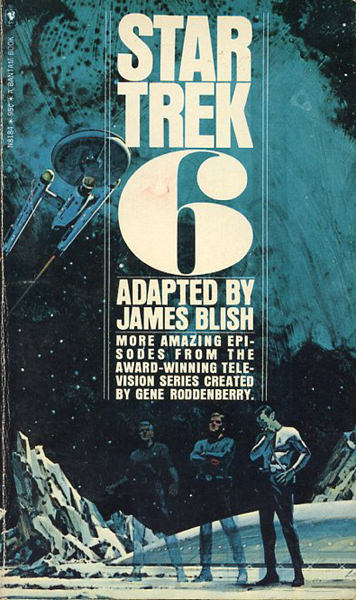 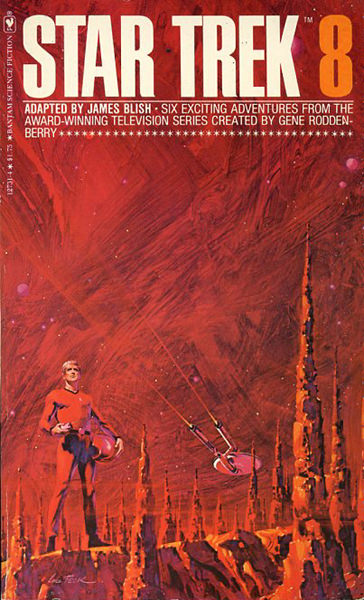 > I always feel a bit bad that “The Winter Players” is rather obscured by the US edition, which does not refer to it in the
> title or on the back cover, though it does provide a teaser under “The Ring, the Jewel, the Bone”.

It’s funny you should mention that. The cover doesn’t even mention “The Winter Players,” but the title page calls the book “Companions on the Road & The Winter Players.” It’s almost as if they changed the title after printing the cover.

I have to disagree regarding the never reprinted. I had a copy of Companions on the Road with a different cover. It was published by Red Fox in 1988 as a single volume. I think they also did one for Winter Players. That said I must look around for a copy, would love to re-read.

I read the white-covered edition last year after finding a used copy online. “The Winter Players” is a tale of feuding sorcerers where Lee lets the magic fly. The young sorceress protagonist discovers the depth of her power as she pursues a thief who stole a holy relic from her seaside shrine. The tale builds in depth and complexity, delivering a stunning and clever conclusion.

I liked the second novella (“The Winter Players”) better than the first, but both are superb works from one of Lee’s most prolific periods (i.e. the 70s)—which also happened to be the Golden Age of Sword-and-Sorcery. No coincidence there…

I recognize those Star Trek covers!

When I was growing up (in Austin, MN), I had no access to televised Star Trek — none of the local stations were syndicating it, and this was long before cable. So I had to content myself with obsessively rereading all of the Blish Star Trek Log books and waiting to visit my grandparents in California, a much more civilized place.

> I have to disagree regarding the never reprinted. I had a copy of Companions on the Road with a different cover.
> It was published by Red Fox in 1988 as a single volume.

Yeah, right you are. I should have been more specific. The Bantam volume I covered above, which collects both novellas, has never been reprinted. However, the individual novellas, including COMPANIONS ON THE ROAD, have popped up from time to time.

The Red Fox chapbook you’re talking about was published by Beaver Books in 1988, with a cover by Melvyn Grant: 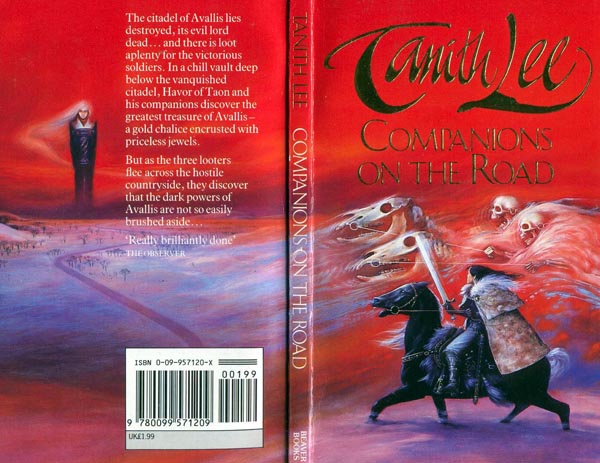 >I think they also did one for Winter Players.

I wasn’t aware of that one — but turns out you’re right again. I did a little homework, and dug up cover for the Beaver Books edition, also published in 1988. 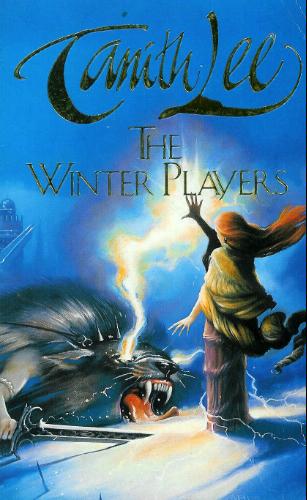 Thanks for the mini-review, John!

If you ever want to do a tribute to Tanith Lee, we’d be honored to publish it here. You’ve been one of her most passionate champions on this side of the pond for years.

> I recognize those Star Trek covers!

I do too… all those lush colors. They had a very different feel from the TV show, which I don’t think was a bad thing.

I should do a brief article on Lou Feck. Strange that I’d never heard the name before, and yet he’d done some much work I was familiar with. Like the Canticle for Leibowitz cover!