We’re continuing with our look at the monumental 40-year career of Tanith Lee, who died last week. We started with The Wars of Vis trilogy, and today we continue with her most acclaimed fantasy series, Tales From the Flat Earth.

I say “most acclaimed” because — in addition to the World Fantasy, British Fantasy, Mythopoeic, and Balrog award nominations these books have accumulated over the years — in the Comments section of her obituary, this series was called “the towering pinnacle” (by Joe Hoopman), “towering legend” (by John R. Fultz), “my faves” (by Arin Komins), and “engrossing” (by rrm). It’s a small sample of fandom, but a compelling one. In my experience, Black Gate readers know what they’re talking about.

[Click on any of the covers for bigger images.] 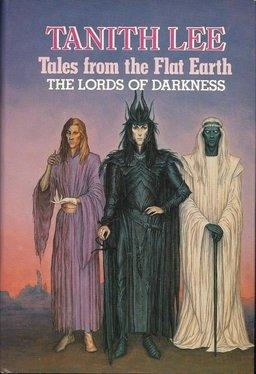 Tales From the Flat Earth consists of four novels and one collection.

All five were originally published by DAW Books, and reprinted in two omnibus collections from the Science Fiction Book Club in 1987, and in deluxe trade paperback editions from Norilana/TaLeKa in 2009.

In his 2010 review of the Norilana editions, John R. Fultz nicely summarized the first book:

Night’s Master… introduces the time-lost world of ancient sorcery where Azhrarn the Prince of Demons and his fellow Lords of Darkness roam the flat world creating mischief, drama, and tragedy across the primeval human kingdoms.

The book is rich with lyrical prose, jewel-bright imagery, dark beauty, and ironic myths. Human protagonists come and go, while the real main character is Azhrarn, who is despicable yet inhumanly handsome, evil yet oddly compassionate, godlike yet flawed, and an unlikely champion of a doomed humankind. Let all would-be fantasy writers savor the flavor of Lee’s sumptuous prose. This is how it’s done, people.

The editions on display above and below are the DAW paperbacks with uniform cover design, identifying them as part of the series. They were published in 1986-1987 to coincide with the release of Delirium’s Mistress.

In addition, two more books in the series have been announced but not yet released:

The Earth Is Flat
Earth’s Master 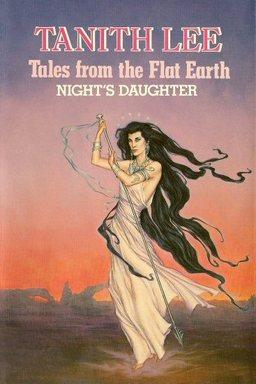 The Earth Is Flat is a new collection that gathers five additional stories published after the last collection, Night’s Sorceries, appeared in 1987:

Earth’s Master is a new novel. It’s uncertain of much of it was finished before Lee’s death.

Michael Whelan is often considered the signature artist for the series, but he didn’t do all of the covers. The editions above were painted by Edmund Dulac, Michael Whelan, and Ken W. Kelly, as follows:

Tales From The Flat Earth is inspired by One Thousand and One Nights, and is structured as a series of interconnected stories. Here’s the back cover text for the first volume, Night’s Master:

In those days the Earth was not a sphere and the demons dwelled in vast magical caverns beneath its surface. Wondrous cities dotted the land and strange peoples and fabulous beasts prowled the deserts and jungles of the world.

Supreme among those mighty demons was Azhrarn, NIGHT’S MASTER. He it was whose pranks made nightmares on Earth, who brought desire and danger to those it amused him to visit, and who could grant wonders and create honors unspeakable.

Tanith Lee, author of The Birthgrave and Volkhavaar, has created in this new novel a fascinating version of the world as it might have been, a world reminiscent of the Arabian Nights and yet utterly unique.

The early DAW editions had very different covers, and were identified only as “An adult fantasy” on the cover. No reference was made to being part of a series for the first three books.

The first novel was covered by George Barr, who did dozens of covers for DAW in the 1970s. I’ve collected several of the early editions here; cover art credit is as follows:

The Science Fiction Book Club reprinted all five in two omnibus collections in 1987, with covers by Dawn Wilson

In addition to accolades from Black Gate readers, these books are some of the most acclaimed in Tanith Lee’s oeuvre. They’ve been nominated for the World Fantasy, British Fantasy, Mythopoeic, and Balrog awards.

The books were also published in the UK and Australia by Arrow Books/Legend, with covers by Mick Posen and Tim White (above and below).

Finally, here’s the back cover text for Death’s Master:

In those days the world was flat and demons dwelled beneath who walked among the cities and kingdoms of the surface with powers and mischiefs to please themselves.

Among those demons there were two who were mighty above all others. One was Azhrarn, Night’s Master, and the other was the lord of darkness whose name was Uhlume, Death’s Master.

See all of our recent posts of Series Fantasy here.

These are particular favorites of mine of Lee’s work.

I hear that a lot. I was unaware (until I started putting this article together) that there were two more planned volumes… I hope we get news on them soon.

Two more Flat Earth volumes? Ah, a hint of joy amid the sorrow of her passing. Please do let us know when/where, sir.

I certainly will, Eugene.

I like to describe the Flat Earth books as “Sandman in Zothique”. Which is completely wrong in every possible way, but still makes some kind of sense to me.

Lots of great covers there. And a few that are … less so.

I well remember the covers, but never bought or read any of them. Now I’ kind of wishing I had.

They’re still readily available on line… and DAW reports they have signed a deal for a large portion of her back catalog, and will hopefully be releasing new editions. It’s not too late to try them!

Describing the Flat Earth books as “Sandman in Zothique” is absolutely spot on. I think I’ve read that Jack Vance’s Dying Earth was inspirational to Tanith Lee, and the Zothique is in the Dying Earth genre even though it predates it.

I remember when Norilina books announced they were going to reprint Tanith Lee’s books, and seeing The Flat Earth and Earth’s master as upcoming titles. This must have been several years ago now, so hopefully they are complete and we’ll see them soon.

The brand new ebook release of The Birthgrave (from DAW) does specifically list Earth’s Master as one of the Flat Earth books (and also mentions DAW publishing both new & classic Lee titles), so I’ll be very disappointed (but not necessarily surprised) if it turns out that Earth’s Master hadn’t actually been completed to some degree or other.

I tend to describe these as alternate Arabian Nights.

This series delighted me beyond words, and learning the news last year that additional books would be forthcoming was wonderful.
I hope the remaining volumes will be released – somehow.
I mourn this astonishing artist’s passing…