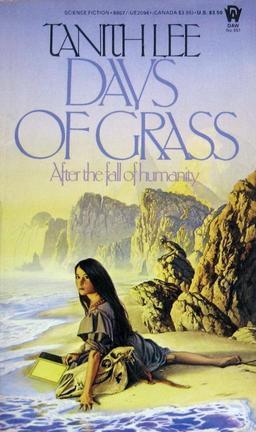 We’re continuing with our look at the extraordinary 40-year career of Tanith Lee, who passed away on May 24th. So far I’ve focused on her highly regarded series work, but I don’t want to neglect her standalone novels.

Today I’d like to briefly highlight Days of Grass, subtitled After the Fall of Humanity, one of the first Tanith Lee novels I ever bought. I wish I could tell you I was drawn by her reputation, but truthfully it was Michael Whelan’s gorgeous cover that seduced me. Click on the image at right for a bigger version — and be sure to note the man hiding in the rocks, and the alien striding machine rounding the cliffs on the far left.

Days of Grass might do better today than it did when it was first published. It’s a postapocalyptic dystopia with a strong female protagonist, and the world didn’t know how to treat a book like that in 1985. As it is, it has never been reprinted, and has now been out of print for 30 years. Copies are available online for not much more than the original cover price.

The free humans lived underground, secretive, like rats. Above, the world was a fearsome place for them – the open sky a terror, the night so black, and the striding machines from space so laser-flame deadly.

Esther dared the open; she saw the sky; she saw the Enemy. And she was taken – captive – to the vast alien empty city. Surrounded by marvels of science not born on earth, Esther did not know what they wanted of her. There was mystery in the city, dread in the heavens, and magic in the handsome alien man who came to her.

John,
Thanks for bringing back some attention to Lee’s fine books. Though she was better known for her fantasy, she certainly had some good SF novels like Day By Night, Drinking Sapphire Wine, and Electric Forest. Just reading the blurb above has inspired me to dig out my copy of the book to read again.
Chuck

Thanks, Chuck. I’m not familiar with DAY BY NIGHT. Is it a standalone SF novel?

John,
I believe Day By Night is a standalone SF novel, at least I do not recall any other books in a series. Published in 1980, DAW Book #408. Fantastic Maitz cover, featuring(I believe)Tanith Lee herself as the main character in the painting. AFAIK never republished.
Chuck

I am almost ashamed to call myself a Tanith Lee fan when I completely missed books like Days of Grass. Guess I have a lot of delving into the dealer’s room at my next convention (Readercon, Burlington, MA).

> Fantastic Maitz cover, featuring(I believe)Tanith Lee herself as the main character in the painting.

Ah, now I remember it. And I had no idea Maitz put Lee in the painting!

I found a copy online, and it seems to me that you could be right: 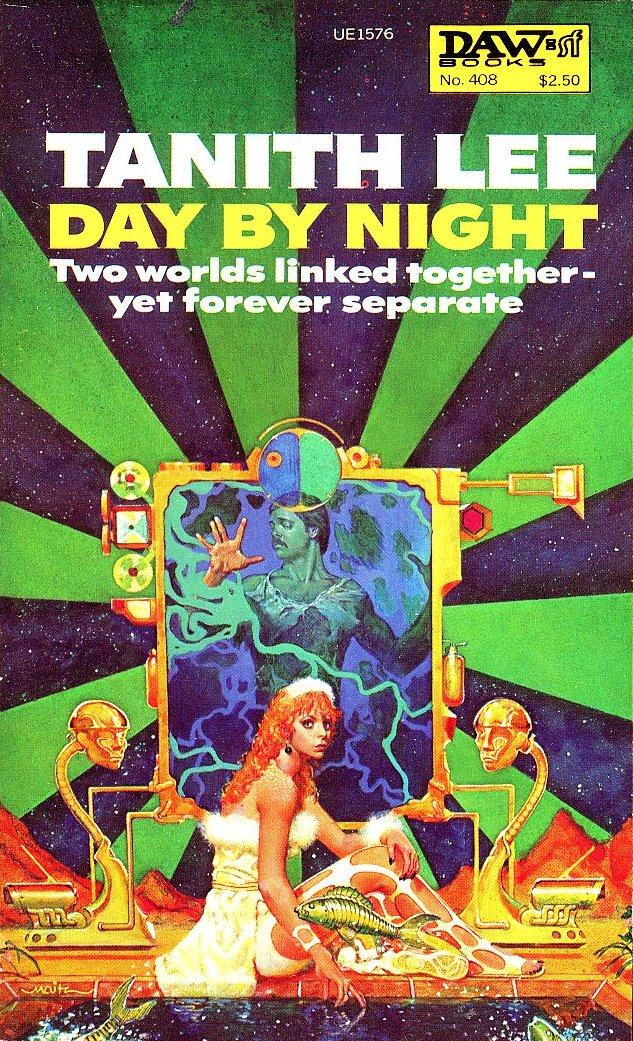 There are too many Lee standalone novels to address them all as part of our tribute. But I do hope to cover her most popular series.

> I am almost ashamed to call myself a Tanith Lee fan when I completely missed books like Days of Grass.

Don’t be – we all miss something (as I just demonstrated, with DAY BY NIGHT). That’s the joy of collecting someone as prolific as Tanith Lee… there’s always more to discover!

> Guess I have a lot of delving into the dealer’s room at my next convention (Readercon, Burlington, MA).

Enjoy it! I have plenty of friends going to Readercon this year. I wish I could be there.