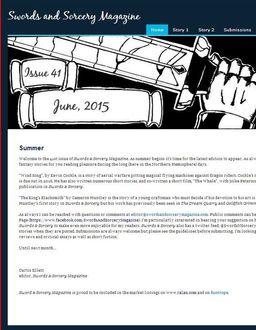 “Wind Song,” by Kevin Cockle, is a story of aerial warfare pitting magical flying machines against dragon riders. Cockle’s novel Spawning Ground is due out in 2016. He has also written numerous short stories, and co-written a short film, The Whale, with Mike Peterson. This is his first publication in Swords & Sorcery.

“The King’s Blacksmith,” by Cameron Huntley is the story of a young craftsman who must decide if his devotion to his art is worth the cost. This is Huntley’s first story in Swords & Sorcery but his work has previously been seen in The Dream Quarry and Goldfish Grimm’s Spicy Fiction Sushi.

Swords and Sorcery Magazine is edited by Curtis Ellett, and is available free online. Fletcher Vredenburgh reviewed issue #40 in his May Short Story Roundup.

See our mid-June Fantasy Magazine Rack here, and all of our recent Magazine coverage here.