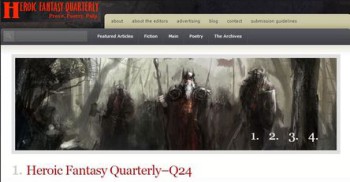 I’m sorry that I let April pass without a short story roundup. The outpouring of new heroic fiction continues unabated on the pages of numerous magazines the genre is lucky to have. I’m back on track and here to tell you about last month’s must-reads.

I have never left any doubt in my reviews about which is my favorite fantasy magazine, so let me start by singing the praises of Adrian Simmons and his cohorts at Heroic Fantasy Quarterly. Each issue has terrific cover art, two or three stories and a number of poems, and in the three years I’ve been reading and reviewing the magazine it has always been at least satisfactory and usually splendid. What makes HFQ so strong is the editors’ love for and knowledge of the genre, which is obvious by their singular ability to select and edit stories. Always true to the traditions of heroic fiction, they yet manage to publish tales that push the genre in new directions.

Issue 24 is maybe their best yet. This quarter’s artwork is a dark, brooding piece titled “Wizard With Army” by Vuk Kostic. Click this link to see the painting in its full glory.

The issue opens with Cullen Groves’ first published story, “The Madness of the Mansa,” a tale of a capricious monarch with a peculiar penchant for poetry.

Following a night in which “a great storm arose over the western ocean, and many citizens and sailors in the port of Asongai told how they had seen the demons of madness walking the black winds in the darkness.”, the ruler, the Mansa, is struck by a curious madness. From that point on he allows people to address him only poetically, using “the old meters” of songs and legends.

In the wake of the Mansa’s madness, the merchants of Asongai find themselves unable to successfully compete for his attention against the skilled singers of his tribal subjects. When a merchant named Bukra overhears the ex-gladiator, Draba, singing in a tavern, he hires him to petition the Mansa on his behalf.

Draba himself is a rogue, equally as willing to be honest merchant as pirate. He also has no qualms about pretending to be Bukra’s nephew in order to deceive the Mansa. I believed the pragmatic outlook of the character, and I liked him. He lacked the supposedly mordant, but really just glib, cynicism too common to similar characters.

For all the nice scene-setting and solid action sequences, the verbal duels between Draba and the tribe’s representative, Idwara, are the best part of the story. Groves’ talent as a poet serves him immensely well, Draba’s humorous sparring and Idwara’s simmering anger beg to be read aloud. Maybe HFQ can subcontract the folks over at Beneath Ceaseless Skies to create a podcast of it.

Things turn noticeably darker in Dennis Mombauer’s “Melting Gold and Ashes.” Foes and friends alike have gathered for the funeral of the warrior Tlamord Laygrin. There’s really not much plot to the story — the congregants all speak about the dead man — but it doesn’t matter.

The story is a dark catalogue of Laygrin’s horrible deeds, and the history of a world in tatters. Several of the images Mombauer’s written will linger for some time: a chieftain with teeth “inlayed with sea crystals and mother-of-pearl” that glitter like “a coral reef opening up in the shoals of a bay”; battles fought in barrow tunnels and passes under mountains; coins representing every individual killed by Laygrin strung up on lines and then melting into the flames of his shipboard funeral pyre.

It’s filled with tantalizing scraps and bits that I think work best while only hinting at strange events and characters. Who is the Mangled Jester and what sort of terror is he spreading? How did the Acid Tyrant enslave Laygrin and what was the Feathered Hand? Perhaps it could serve as the prologue for a longer work on the life and times of Laygrin, but I suspect it works best as is.

Things get a little more personal, but no less despairing, in “The Reeds of Torin’s Fields” by Andrea G. Stewart. It tells the story of Philos, once a member of a martial order, now a bounty hunter looking to find and end the life of whomever has been murdering people in the city of Vedas and taking their corpses. Soul numb from the death of his son, Philos is hoping to come to his own end in the pursuit of this killer. Instead of death he discovers how much evil he is willing to do in order to restore his child to life. Despite being one of the bleakest stories I’ve read in many a long time, it still manages to preserve an iota of hope.

HFQ continues to be one of the few places in fantastic fiction dedicated to emulating the skaldic tradition by publishing poems every month. One can easily hear the Irish battle goddess herself singing “Morrigan’s Song” by Colleen Anderson. It reeks of the the cold, black abyss of death in battle. “Shamans” by David Farney, one of HFQ‘s editors, tells of fishermen doubting the ability of certain shamans.

Swords and Sorcery Magazine Issue 40 has its usual complement of two stories, as well as an essay by Rick Hudson taking a look back at Fritz Leiber’s Nehwon tales.

“The Goblin’s Son” by Christopher Mowder is interesting, but a story I found unsatisfying. There has been enmity between goblins and men for centuries but things have become worse with the advent of the human rebel, Thorsson. No victory against the rebel general has been great enough to prevent him from continuing to send his armies into the goblins’ Black Woods home and burn out acres upon acres.

A typical goblin with his race’s typical opinions of humans, Gorman is outraged when he learns the ruling council has selected his son, Adrax, to serve with the human army against Thorsson. The rebel is as much a threat to them as he is to the goblins and the humans will send one of their men to serve with the goblin army. These things mean nothing to Gorman. His disapproval is such that his wife abandons him and once Adrax goes off to war he never sees him again.

Instead of Adrax’s, it’s really the story of the Goblin father, focusing on his anger and feelings. The son exists only in a few short letters and memories. We don’t really know who or what he is and it makes the resolution feel hollow.

“How Pawla Stole the River Livvy” by Anna Sykora is about the friendship between Shawn, the miller’s apprentice, and the very non-human Pawla. She is furry with a bushy red tail, and lives in a cave in the woods. She is always drawn back to the town of Harmon in order to steal the occasional fish or pie. Now her habits have led to her arrest. When strange invaders arrive outside the town, only Shawn’s concern for her saves her and brings her cleverness to bear against them. I like this one a lot. The relationship between Shawn and Pawla reads quite believable and the invaders are distinctly not the run-of-the-mill fantasy villains. Sykora’s bio states she’s placed 137 other stories and, based on this one, I’d like to track some of them down.

So ends another short story round up. So go read ’em and, please, let the editors and authors know what you think.

Fletcher, of COURSE you missed April. Sigh. Just another scrap of evidence to prove that, no, the universe really is out to get me. If you’ll excuse me, I’m off to mutter to myself in a dark corner.

Sorry, Ken. Where did you have a story?

No need to apologize, Fletcher. You certainly don’t owe me anything. (I imagine you can paraphrase the appropriate Neil Gaiman quote here.) But to answer you question, one of my Cesar the Bravo stories appeared in Swords and Sorcery Magazine.

Thanks for the positive review of HFQ #24. From an editorial standpoint “Madness of the Mansa” was fairly low-hanging fruit. Anybody who can pull off a S&S poetry slam is worth keeping. “Melting Gold and Ashes” was also pretty easy, riding on the strength of the atmosphere. “Reeds of Torrin’s Field” was a bit of a risk… trying to have its S&S cake and eat the emotionally heavy bits, too– which it seems to have done!

I read “The Goblin’s Son” and liked the change of perspective. I’ll be marathon reading the back issues soon.

@Ken—I’ll make a point of finding and reading your story. I frequent the magazine to look for sword and sorcery writers. I’m glad there is a publication for them.