We lost David Hartwell on January 20th. This is our second article in a series that looks back at one of the most productive careers in our industry.

The Dark Descent, subtitled The Evolution of Horror, is one of the most important horror anthologies ever published. Weighing in at a massive 1104 pages, it’s one of the most detailed and insightful surveys of horror fiction we have. Showcasing 56 of the best horror stories ever written, it traces the development of modern horror from the classic work Edgar Allan Poe, M. R. James, Charles Dickens and H. P. Lovecraft, all the way to Shirley Jackson, Manly Wade Wellman, Fritz Leiber, Karl Edward Wagner, Philip K. Dick, Gene Wolfe, and Stephen King. The Dark Decent won the World Fantasy Award for Best Anthology.

One thing I especially liked about this book is that David did not stint on longer stories. He included a total of five short novels, including Gene Wolfe’s classic “Seven American Nights,” and one of the finest horror stories ever told, Michael Shea’s brilliant “The Autopsy”: 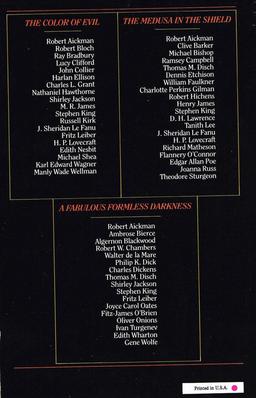 The Dark Descent was reprinted in three sizable paperback volumes by Tor, and by Grafton in the UK. Here’s the deets on the US versions:

I’m too lazy to include the Table of Contents for each of the individual paperbacks, but you can see the authors for each listed on the back cover of the trade paperback edition (above right).

For those looking for something a little broader in their reading, I highly recommend the massive anthology The World Treasury of Science Fiction, published by Little, Brown in January 1989, as part of Clifton Fadiman’s World Treasury line (which also included the two-volume World Treasury of Children’s Literature and The World Treasury of Love Stories, among others). Weighing in at a massive 1104 pages (including David’s 21-page introduction), it looks at modern SF from a global perspective.

SF historian and editor Hartwell, who in little more than a year has produced massive anthologies of horror (The Dark Descent) and fantasy (Masterpieces of Fantasy and Enchantment), now performs a similar service for SF readers with this chest-denting, 1100-page volume. He has brought together 53 selections, virtually every one of high quality, fully a third from Europe, Asia or Latin America. Among the best stories in this first-rate collection are J. G. Ballard’s “Chronopolis,” about a future in which time pieces are outlawed; Robert Sheckley’s “Ghost V,” set on a paradise planet haunted by monsters from the subconscious, a story that expertly mixes suspense and humor; Philip K. Dick’s chilling future war scenario, “Second Variety”; Larry Niven’s tale of night of apocalyptic change, “Inconstant Moon”; and “Vintage Season,” about decadent time tourists who travel to historical tragedies to enjoy them as theater, by Henry Kuttner and his wife, C. L. Moore. There are also fine tales by Gene Wolfe, Arthur C. Clarke, Stanislaw Lem, Fritz Leiber, C. M. Kornbluth, Ursula LeGuin, Robert Heinlein, Italo Calvino, Thomas Disch and John Updike. The editor has contributed a scholarly, engaging introduction to each story.

Beyond the Vandermeers’ massive and fairly recent Weird volume, is anybody doing anything like these historically focused, or historically contextualized, anthologies anymore? It seems to me that themed and year’s best are sort of the rage with anthologies right now (or maybe that’s always been the case).

We’ve covered a few of them at Black Gate:

Thanks, I’ll keep that name in mind.

For a great, recent anthology check out
The Wesleyan Anthology of Science Fiction.

I concur! I should have thought of that one. We covered it here four years ago:

Thanks James! I actually checked this out of the library a few years ago and completely forgot about it.

Yeah, this volume should not be forgotten!

I also read Hartwell & Cramer’s Space Opera Renaissance this summer. That was a massive, massive tome of literary goodness.