We lost David Hartwell on January 20th. This is our fourth article in a series that looks back at one of the most important publishers in our industry.

David Hartwell’s first anthology, The Battle of the Monsters and Other Stories, was published through tiny Gregg Press in 1976. He reached a bigger audience ten years later with his second, Christmas Ghosts (1987), co-edited with Kathryn Cramer. After that came his real breakout book, the massive The Dark Descent (1987), which Tor kept in print for a decade, and eventually reprinted in three paperback volumes.

David had found his forte: huge retrospective anthologies that put both his exceptional taste and his encyclopedic knowledge of the field on full display. Libraries snapped them up, they garnered him major awards, and they established him as one of the most respected editors in the field. He produced roughly a dozen of them in his career, each one a feast that readers can return to time and again.

Today I want to look at two of his best from the early 90s: Foundations of Fear (1992), the companion volume to The Dark Descent, which convincingly made the case for the thriving genre of 20th Century supernatural horror, especially at novella length; and The Ascent of Wonder: The Evolution of Hard SF (1994), a massive 990-page tome that aimed to be the definitive exploration of science fiction’s “visionary core,” co-edited by Kathryn Cramer.

Here’s the back covers to each  — since, as long as I had to lug these massive volumes over to the scanner, I might as well do a complete job of it.

Here’s the inside jacket copy for Foundations of Fear. Note the emphasis on women writers, and supernatural horror (as contrasted with psychological horror):

Horror fiction is a special and enduring pleasure, invoking fear and wonder. For centuries, writers have struggled to achieve the sublime through these tales, at times creating works of enduring interest. Horror novels have become one of the major bestselling forms of fiction in recent years, and Hollywood has given us a huge and varied supply of popular films, which has created an audience in the millions for horror.

But throughout history, many of the finest achievements in horror have been in short fiction. From these masterpieces have been selected the contents of Foundations of Fear.

This anthology presents an international selection of the strongest work by writers such as Clive Barker, H.P. Lovecraft, and Arthur Machen, who have been identified as category horror writers, and by writers such as Carlos Fuentes, Gerald Durrell, and Daphne Du Maurier, whose literary reputations transcend category.

For horror in literature cuts across all category boundaries. Thus the reader will find in this volume domestic horror stories by Thomas Hardy, Violet Hunt and Mary Wilkins Freeman; and stories by Robert A. Heinlein and Philip K. Dick, masters of science fiction.

The Introduction to Foundations of Fear takes particular note of women writers, who have made important contributions to the development of the horrific in literature; in addition to those already mentioned the collection includes works by Madeline Yale Wynne, Harriet Prescott Spofford, Gertrude Atherton, and others.

Foundations of Fear challenges the notion that the supernatural in fiction has in modern times been supplanted by the psychological, the idea that horror is dead. Horror is one of the dominant literary modes of our time, a vigorous and living body of literature that continues to thrill us with the mystery and wonder of the unknown.

This book is conceived as a companion volume to The Dark Descent, in which the anatomy of horror and its evolution were chronicled for the first time in the contemporary period. Foundations of Fear includes many stories of novella length, supplying the reader with works rarely anthologies in smaller, shorter books. 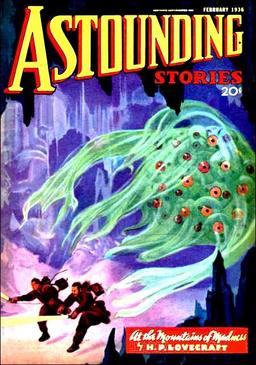 David wasn’t kidding about that last point. If you’re a fan of longer fiction — as I am — Foundations of Fear is a treasure trove, with six long novellas, plus the complete text of H.P. Lovecraft’s only novel, At the Mountains of Madness:

“The Great God Pan” by Arthur Machen
At the Mountains of Madness by H. P. Lovecraft
“Who Goes There?’ by John W. Campbell, Jr.
“… and my fear is great” by Theodore Sturgeon
“Don’t Look Now” by Daphne du Maurier
“The Lurking Duck” by Scott Baker
“The Blue Rose” by Peter Straub 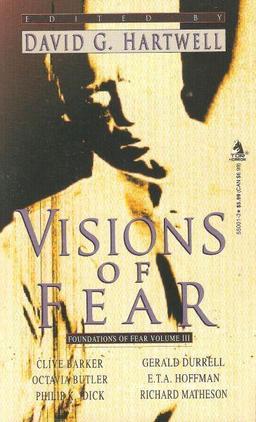 Like The Dark Descent before it, it was eventually broken up into three volumes for the mass market paperback edition:

Foundations of Fear was published by Tor Books in September 1992. It is 660 pages, priced at $27.50 in hardcover. The cover is by Thomas Canty. It has been out of print for over two decades, and there is no digital edition.

The Ascent of Wonder arrived two years later, and helped cement David’s reputation as one of the most knowledgeable editors in the field (not to mention the only one who could routinely assemble, edit, and convince someone to publish anthologies weighing in at roughly 1,000 pages).

Featuring more than sixty groundbreaking short stories by modern science fiction’s most important and influential writers, The Ascent of Wonder offers a definitive and incisive exploration of the SF genre’s visionary core. From Poe to Pohl, Wells to Wolfe, and Verne to Vinge, this hefty anthology fully charts the themes, trends, thoughts, and traditions that comprise the challenging yet rich literary form known as “hard SF.”

Although it’s 330 pages longer than Foundations of Fear, The Ascent of Wonder does not contain as many longer stories. But for those keeping count, it still manages to slip in three novellas:

Here’s the complete Table of Contents, including no less than three introductions:

Ascent of Wonder was published by Tor Books in July 1994. It is 990 pages, priced at $30 in hardcover. The cover is by Carol Russo. Orb published a trade paperback edition in September 1997. It has now been out of print for 19 years, and there is no digital edition.