We lost David Hartwell on January 20th. This is our fifth article in a series that looks back at one of the most gifted editors in our industry.

By the early 90s, as a result of the success of books like The Dark Descent and its follow up, Foundations of Fear, David Hartwell had found his market niche: weighty anthologies that had a solid claim to being definitive surveys of the fantastic. David started with fantasy and horror, and quickly expanded into science fiction, with books like The World Treasury of Science Fiction (1989) and The Ascent of Wonder: The Evolution of Hard SF (1994), co-edited with Kathryn Cramer.

In the mid to late 90s, David produced two highly regarded anthologies of Canadian science fiction, both edited by Canadian SF writer and critic Glen Grant: Northern Stars: The Anthology of Canadian Science Fiction (1994) and Northern Suns (1999). The former is a fine collection of the best Canadian SF produced in the late 20th Century (1973-1994), and the latter serves as an excellent snapshot of the best Canadian writers working in the field in the late 90s.

Northern Stars showcases many of the most famous Canadian SF writers, including Peter Watts, Phyllis Gotlieb, Élisabeth Vonarburg, Dave Duncan, Jean-Louis Trudel, Michael G. Coney, Joël Champetier, James Alan Gardner, Eileen Kernaghan, Yves Meynard, Garfield Reeves-Stevens, Robert J. Sawyer, Robert Charles Wilson, Candas Jane Dorsey and many others. It also includes work from SF writers who immigrated to Canada and came to call it home, including William Gibson, Michael G. Coney and Spider Robinson. Although most of the stories are standalone, there is a Newford tale by Charles de Lint, and a fascinating contribution from one of the hottest Canadian SF writers of the 90s, Donald Kingsbury, who was nominated for the Hugo Award for “The Moon Goddess and the Son” (1980) and the novel Courtship Rite (1982).

Northern Stars contains an excerpt from The Finger Pointing Solward, the sequel to Courtship Rite. The Finger Pointing Solward is one of the most famous unpublished novels in Science Fiction… in an interview with fellow Canadian Robert J. Sawyer in September 1982, Kingsbury noted that he was still “polishing” it, and he continues to list it as forthcoming at his website (where he promises he may post chapters). But so far the 18-page excerpt which appeared in Northern Suns, “The Cauldron,” is the only portion long-suffering fans have seen.

Alas, Black Gate 16 was never published, and we never got to use that gorgeous piece of artwork. Fortunately Bradley P. Beaulieu rescued it, and made it the cover of his upcoming short story collection, In the Stars I’ll Find You.

The editors also reprinted Judith Merril’s 1985 introduction from the opening volume of the most famous (and longest-running) Canadian anthology series, Tesseracts, plus an introduction by Glenn Grant, an article by Candas Jane Dorsey and an index of Canadian SF Awards.

Here’s the complete table of contents for Northern Stars. 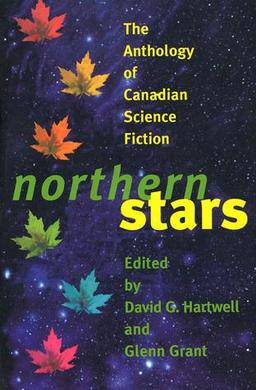 Northern Stars: The Anthology of Canadian Science Fiction was published by Tor Books in September 1994. It is 384 pages, priced at $21.95 in hardcover. The cover is by Nicholas Jainschigg.

Tor published a trade paperback edition in August 1998, with a different cover (at right). It has now been out of print for 18 years, and there is no digital edition.

Northern Suns appeared in 1999, also co-edited with Glenn Grant. It includes fiction from the hottest Canadian writers at the end of the century, including Margaret Atwood, Scott Mackay, Karl Schroeder, Nalo Hopkinson, W. P. Kinsella, David Nickle, Nancy Kilpatrick, Ursula Pflug, Cory Doctorow, and a long novella by Geoff Ryman. The editors also slip in one pre-1994 piece from an author they overlooked last time, “Offer of Immortality” by Robertson Davies (from 1982). There’s also a 8-page article by John Clute and an intro by Glenn Grant.

Northern Suns was published by Tor Books in April 1999. It is 382 pages, priced at $24.95 in hardcover. Tor published a trade paperback edition in April 2000. It has now been out of print for 16 years, and there is no digital edition.

Wow! So that piece was rescued twice, essentially. It was commissioned for a book for Tor that was never published. Then you had a crack at it. Then it landed with me. I feel very fortunate!

Ah, I read too quickly. I see you noted the book itself. I didn’t realize the book it was commissioned for was THE FINGER POINTING SOLWARD. Interesting to read more about it.

Glad to see you finally gave it a home, Brad!

I don’t know if we’ll ever see the novel that inspired it (seeing as it’s now some two decades overdue), but I would like to.

What a gorgeous painting!

Courtship Rite was a mighty odd book. Considering the many difficulties Peadar O Guilin encountered when critics emphasized the characters’ cannibalism, I’m amazed Kingsbury’s book did so well back in the day. I read it as a teenager, and the characters’ own sense of their society’s customs as normal made it just barely possible to finish. I seem to recall the three brothers regarded themselves as uncommonly lucky that they’d all made it through their creche years without being eaten, and one of their wives made a trip to the market to pick up a baby for family dinner. Cannibalism as funerary custom for the already dead, well, that I could get behind, but children as staple food is a bit much. Now that I’m a parent, I would probably not be able to make it through three chapters, for all the book’s excellence.

Maybe it got to be a bit much for Kingsbury, too.

This is great for Canadians. Now if they could only field a hockey team….(just kidding–that was pure trolling—I love you Canada)

That was great John. I’ll have to listen to my Gordon Lightfoot music when I read this.