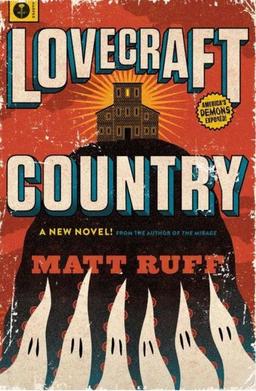 I’ve followed Matt Ruff’s career since his 1988 debut novel Fool on the Hill, a modern fairy tale set in the campus of Cornell University. His more recent novels include Set This House in Order, the tale of a man with hundreds of personalities who’s asked to assist a co-worker also afflicted with multiple personality disorder, and The Mirage, an alternative history of 9/11.

His latest novel blends historical fiction, pulp noir, and Lovecraftian horror as it follows a black man on his journey across America. A journey in which he faces police harassment, discrimination… and the attentions of something far darker.

Chicago, 1954. When his father Montrose goes missing, 22-year-old Army veteran Atticus Turner embarks on a road trip to New England to find him, accompanied by his Uncle George—publisher of The Safe Negro Travel Guide — and his childhood friend Letitia. On their journey to the manor of Mr. Braithwhite — heir to the estate that owned one of Atticus’s ancestors — they encounter both mundane terrors of white America and malevolent spirits that seem straight out of the weird tales George devours.

At the manor, Atticus discovers his father in chains, held prisoner by a secret cabal named the Order of the Ancient Dawn — led by Samuel Braithwhite and his son Caleb — which has gathered to orchestrate a ritual that shockingly centers on Atticus. And his one hope of salvation may be the seed of his — and the whole Turner clan’s — destruction.

A chimerical blend of magic, power, hope, and freedom that stretches across time, touching diverse members of two black families, Lovecraft Country is a devastating kaleidoscopic portrait of racism — the terrifying specter that continues to haunt us today.

One book that Harper rejected is on the Kindle best seller list. Nick Cole’s Control Alt Revolt sells for 99 cents which is a steal. $12 is a bit pricey for me.

Wild Ape – Ever notice how they (meaning the P.C. Establishment) love to churn out all these “Radical Dooood” works…?

Like, written by Women, Non-Whites – of course out to bash white men, “The Patriarchy!” etc.?

And they often do very little other than using the exact SAME classic Sword and Sorcery, Science Fiction, Adventure/Horror tropes… Just a switcheroo of bad guys and good guys with molasses in winter thick preaching and maybe its readable?

Then the big companies promote it like mad – tons of obviously paid ads all over the net for this thing. ?Did Black Gate get anything or just out of the ‘kindness of their heart?’

And of course, as you mentioned in a roundabout way, a “Dead Tree” price-point.

Well, at least there’s some business sense. SJW’s will buy the book to ‘prove’ they support this ‘radical’ but now ‘fashionably radical’ outlook… I’d thought the publishers only cared ramming their stuff down the public’s throat and the Govern-NOT paid them in tax breaks/subsidies so they didn’t have to make a profit if huge enough.