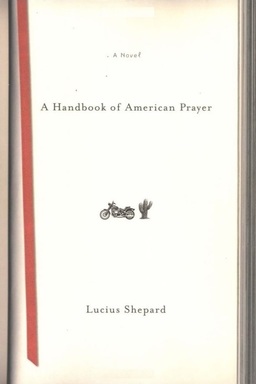 Lucius Shepard died on March 18 and, to commemorate his profound contributions to fantasy, we are surveying his books here. Today, we continue with a short novel with a fascinating premise: A Handbook of American Prayer.

Wardlin Stuart is in prison for manslaughter when he begins to write letters to God. He soon finds that his prayers are answered — all of them. Wardlin seems to have accidently stumbled on the correct way to supplicate God… or, at least, a god. But when he publishes his prayers, he sets himself up for a confrontation with a powerful fundamentalist minister. And in the meantime, God appears to have arrived on Earth…

A man walks into a bar. A dispute ensues, and the bartender kills him. He’s sentenced to ten years for manslaughter. In prison, the convict, Wardlin Stuart, writes prayers addressed to no god in particular. Inexplicably, his prayers — whether it’s a request for a girlfriend or a special favor for a fellow inmate — are answered, be it in days or weeks. When his collection of supplications, A Handbook of American Prayer, is published by a New York press, Stuart emerges a celebrity author. Settling into a new life in Arizona, he encounters a fundamentalist minister. The two are destined for a confrontation. In the interim, it seems that the god to whom Stuart has been praying has manifested himself on the earth. In this short novel about America’s conflicting love triangle — celebrity, spirituality, and money — Shepard negotiates the thin line between the real and the surreal, expounding upon violence and redemption along the way. This story of an unlikely American messiah shows why The Wall Street Journal has compared Shepard, an award-winning author, to Graham Greene, Robert Stone, and Ward Just.

We previously discussed Shepard’s acclaimed collection The Dragon Griaule and his vampire novel, The Golden.

A Handbook of American Prayer was published by Thunder’s Mouth Press on September 14, 2004. It is 272 pages in hardcover. A trade paperback edition was published simultaneously. Both are out of print; there is no digital edition.