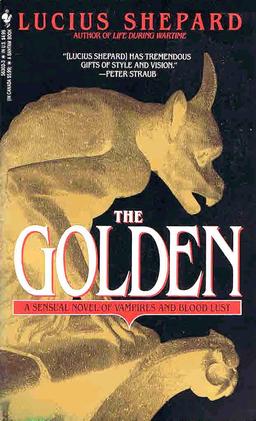 Lucius Shepard was known chiefly as a science fiction writer, and for good reason. His most popular books, including Green Eyes and Life During Wartime, were science fiction and so was much of his most acclaimed short fiction.

But to disregard his fantasy contributions would be a major oversight. Shepard died earlier this month and to commemorate his profound contributions to the genre, we will survey his fantasy books, beginning with his third novel, 1993’s The Golden, a tantalizing mix of mystery and horror subtitled A Sensual Novel of Vampires and Blood Lust.

In the mid nineteenth century, vampires gather at Castle Banat, one of their most sprawling and ancient warrens. Their five-hundred-year breeding project has produced the Golden, a mortal of perfect blood, and they’ve come to drink from her in a ceremony that will incidentally make her one of the Family. When the girl is found murdered, the clan’s shadowy patriarch calls on the detective Michel Beheim to solve the crime. But Michel has been a vampire for only a short while, and though he was a talented investigator among mortals, he is ill-prepared for the task. Soon he is fighting to survive the bizarre terrors of the labyrinthine castle and the schemes of vampires who guard a secret that may forever alter the world of the undead.

The Golden won the Locus Award for Best Horror Novel in 1994.

The Golden was published in a limited edition hardcover by Mark V. Ziesing books in April 1993 and in a mass market paperback by Bantam Books in August 1993. It was 291 pages in paperback, priced at $4.99. It is currently out of print, but a digital version is available for $6.99.

I have that exact paperback sitting on my shelves, waiting for a read. To be honest, I knew nothing about Lucius or his sci-fi roots – this just came recommended as a rather dark, violent vampire tale.

It took a lot of Shepard’s fans by surprise, I think. It was a pretty sharp left turn for an author known primarily for his realistic near-future SF.

If you ever crack it open, let us know what you think!

[…] We previously discussed Shepard’s acclaimed collection The Dragon Griaule and his vampire novel, The Golden. […]