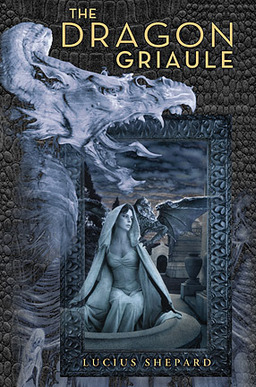 Lucius Shepard died last month and, to commemorate his profound contributions to the genre, we are surveying his fantasy books here. Today, we continue with one of his most famous books, The Dragon Griaule.

The point could be made that Shepard made his greatest contributions to fantasy at short length and certainly this volume supports that theory. A collection of six linked stories, including two of his most famous — “The Man Who Painted the Dragon Griaule” and “The Scalehunter’s Beautiful Daughter” — The Dragon Griaule collects all the tales of the massive corpse-dragon Griaule, including a new story, “The Skull,” which connects the mythical world of the Carbonales Valley to one of Shepard’s most prevalent literary concerns, 21st Century Central America.

More than twenty-five years ago, Lucius Shepard introduced us to a remarkable fictional world, a world separated from our own “by the thinnest margin of possibility.” There, in the mythical Carbonales Valley, Shepard found the setting for “The Man Who Painted the Dragon Griaule,” the classic account of an artist — Meric Cattanay — and his decades long effort to paint — and kill — a dormant, not quite dead dragon measuring 6,000 feet from end to end. The story was nominated for multiple awards and is now recognized as one of its author’s signature accomplishments.

Over the years, Shepard has revisited this world in a number of brilliant, independent narratives that have illuminated the Dragon’s story from a variety of perspectives. This loosely connected series reached a dramatic crossroads in the astonishing novella, “The Taborin Scale.” The Dragon Griaule now gathers all of these hard to find stories into a single generous volume. The capstone of the book — and a particular treat for Shepard fans — is “The Skull,” a new 40,000 word novel that advances the story in unexpected ways, connecting the ongoing saga of an ancient and fabulous beast with the political realities of Central America in the 21st century. Augmented by a group of engaging, highly informative story notes, The Dragon Griaule is an indispensable volume, the work of a master stylist with a powerful — and always unpredictable — imagination.

To be perfectly honest, I was never really taken with the Dragon Griaule stories when I tried to read them two decades ago — they were gorgeously written, but the narratives were too slow and rather too infatuated with drugs for my taste. But I’ve always wanted to give them another try. 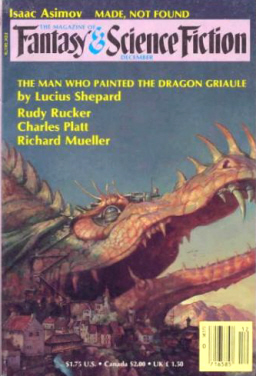 The first Dragon Griaule story, the novelette “The Man Who Painted the Dragon Griaule,” originally appeared in the December 1984 issue of The Magazine of Fantasy and Science Fiction. It was nominated for numerous awards, including the Hugo, the Nebula, the World Fantasy Award, the British Science Fiction Award, the Locus Poll Award, and the SF Chronicle Award.

Here’s the complete Table of Contents

[…] previously discussed Shepard’s acclaimed collection The Dragon Griaule and his vampire novel, The […]