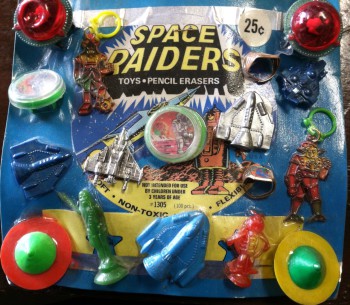 Because I don’t collect enough crap already, I’ve kinda started a new hobby collection. A few months back I shared about my childhood affinity for rubber critters, plastic spaceships, puffy-sticker monster faces, and a myriad of other pocket-sized products that could be had for a quarter from the supermarket vending machine. Well, why buy them individually when you can have the whole vending card?

You may yourself fondly recall the windows of enchantment that lured you to plunk your silver into the slot and eagerly turn the crank: displayed behind the glass were all the amazing things — artfully arranged and shrink-wrapped to a colorful cardboard backing — that might plop into the palm of your hand in an acorn- or bubble-shaped plastic capsule.

It’s easy enough to postulate a psychological motivation behind this new pursuit of hounding down vintage vending cards. Surely you experienced the same disappointment I often did: you’re looking at a rubber monster or a plastic tank with swiveling turret or a metal cap-gun; you go through the rigmarole of begging your mother to spare some change from her purse (this was often quite a feat requiring a great deal of persuasion — sometimes called “throwing a tantrum” — and it didn’t always pay off; in fact, the more you put into it, the greater the odds that you’d be denied on principle: “Well, I can’t give it to you now, because then you’d get the impression that you can throw a fit and get rewarded for it” — a line of reasoning that, as a new parent, I now find myself paraphrasing quite frequently); you succeed in scoring the quarter and feed the machine — crank crank crank — (anticipation) —  the clank of the metal trapdoor — the popping of the lid…

…and you got a plastic ring.

“Mo-om, can I have another quarter? Pleeease? I didn’t want this [expletive deleted].”

Mom: “What word did you just use? Where did you hear that?”

Mom: “You’re not going to waste any more money in that machine. And when we get home, I’m washing your mouth out with soap.”

And that, invariably, is how it ended. Well, not all the time. I got some cool stuff occasionally, but for every “premium” prize featured on the vending card, there were a dozen plastic rings or cheap stickers or something else that was not the way-cool thing beckoning you from behind the glass.

So now, thirty-five years on, I can be assured of getting all the cool stuff featured on the card because I buy the whole card. I have them all! They’re all mine bwah hah haH HAH HAH!

Maybe I’m losing it, just a little. I hear this can happen to new parents and to people hitting middle age. With my timing, those two events exactly coincided — I had children when people are typically having a mid-life crisis.

So what’s so cool about this particular collectible market — aside from the wish fulfillment of the “child within”?

These cards bring back memories, sure. While you can still come by them pretty reasonably right now, they are going up in value and I predict that will continue. And as historic artifacts of the ‘60s and ‘70s, they do shed some interesting light on pop culture as it filtered down to the very youngest consumers.

Let’s take a closer look at the four cards that the postman just dropped off at my doorstep (and that I had to dissuade my children from tearing into).

[TIP: Have another toy or prize handy to give the kids when the collectibles arrive, as a diversionary tactic.]

Space Raiders: Neat card, cool science-fiction theme. You’ve got spaceships (one is a Diener rubber eraser — vintage Diener erasers like this one are becoming popular collectibles), robot keychains, rings with strange aliens pictured, and those two cool red saucers on wheels. But what I love best about this card is that green guy in the bottom left-hand corner (see pic to right). Look familiar? That’s Chewbacca — a rubber jiggler that I can almost guarantee was not licensed, and is probably by itself worth more than what I paid for the card (about ten bucks).

The next card really emphasizes those “ADOPT-A-BEAR STICKERS,” but they’re not what caught my eye. The two rubber jiggler “Uglies” finger puppets are the price of admission here (as a kid, I would’ve gone for the rubber monster and gotten that damn plastic ring off to the right just above the gunslinger button). I also like the “puffy” stickers. But here’s the oddball item that jumps out on this one (click on the picture above to see a larger version): just to the right of the green rubber jiggler and below the green plastic shoe is a rubber patch (it may have a magnetic backing) with a skull and crossbones that says “Speed kills.” Yes, a good message for your five-year-old to carry around in his pocket.

Then there’s the smaller card (pictured to left), likely from a nickel or a dime machine. Two cool puffy rocket-ship stickers, lots of little plastic trinkets — but look at the item occupying the “premium prize” spot right there in the middle framed by the look-at-me orange circle: a miniature Pabst Blue Ribbon lighter. Since a child buying an item out of this machine could neither smoke nor drink, that’s some questionable product placement. I’m guessing you’d never find something equivalent in the machines today.

Now let’s talk collectability. I paid between ten and twenty bucks apiece for these on eBay. That’s pretty good, but I scour the listings for deals and make offers. Similar vintage cards can bring twenty-five to thirty dollars. And I’ve seen some highly collectable ones fetch a hundred dollars or more; those are usually officially licensed tie-ins to popular franchises like Star Wars or Marvel superheroes.

[TIP: One key to knowing whether a card is vintage is that the products will have been made in Hong Kong. If they’re labeled China, they’re too new to be considered vintage. “Vintage” as used in online auctions doesn’t have an official definition, but in collectors’ circles it’s generally agreed to mean at least twenty-five years old.] 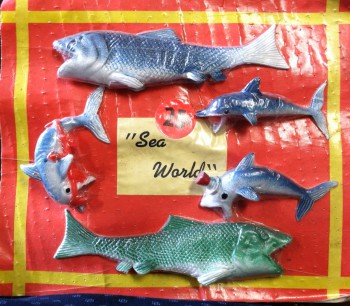 Aside from the aesthetic value of the whole vending card as an object, individual items on the card are often collectible in their own right. This is especially true of rubber jigglers. That’s a term for any of the creatures made in Hong Kong of that oily rubber — anyone my age will know exactly what I’m talking about. From the smallest finger puppet to a 24-inch tall King-Kong, rubber jigglers are a hot item. Especially some of these that could be had for a dime or a quarter when we were young, because how long did any of them last? Your mom might not have even finished buckling you in, let alone left the parking lot, before you’d ripped off an arm or a tail or a wing. So finding them in near-mint condition is rare, and there is growing demand for them.

A jiggler that’s still on the vending card has obviously never been played with, so you can’t find ‘em in much better condition than that. Take a look at that “Sea World” vending card pictured here. Three dolphins and two larger fish, all desirable jigglers. I paid $14 for the card, but I could pull them off and sell them individually for $5 to $6 apiece, doubling my investment.

Of course, I won’t do that. These are mine, I tell you! I’ll chime in here every now and again in coming weeks with more finds from the Bazaar of the Bizarre (with due credit to Fritz Leiber).