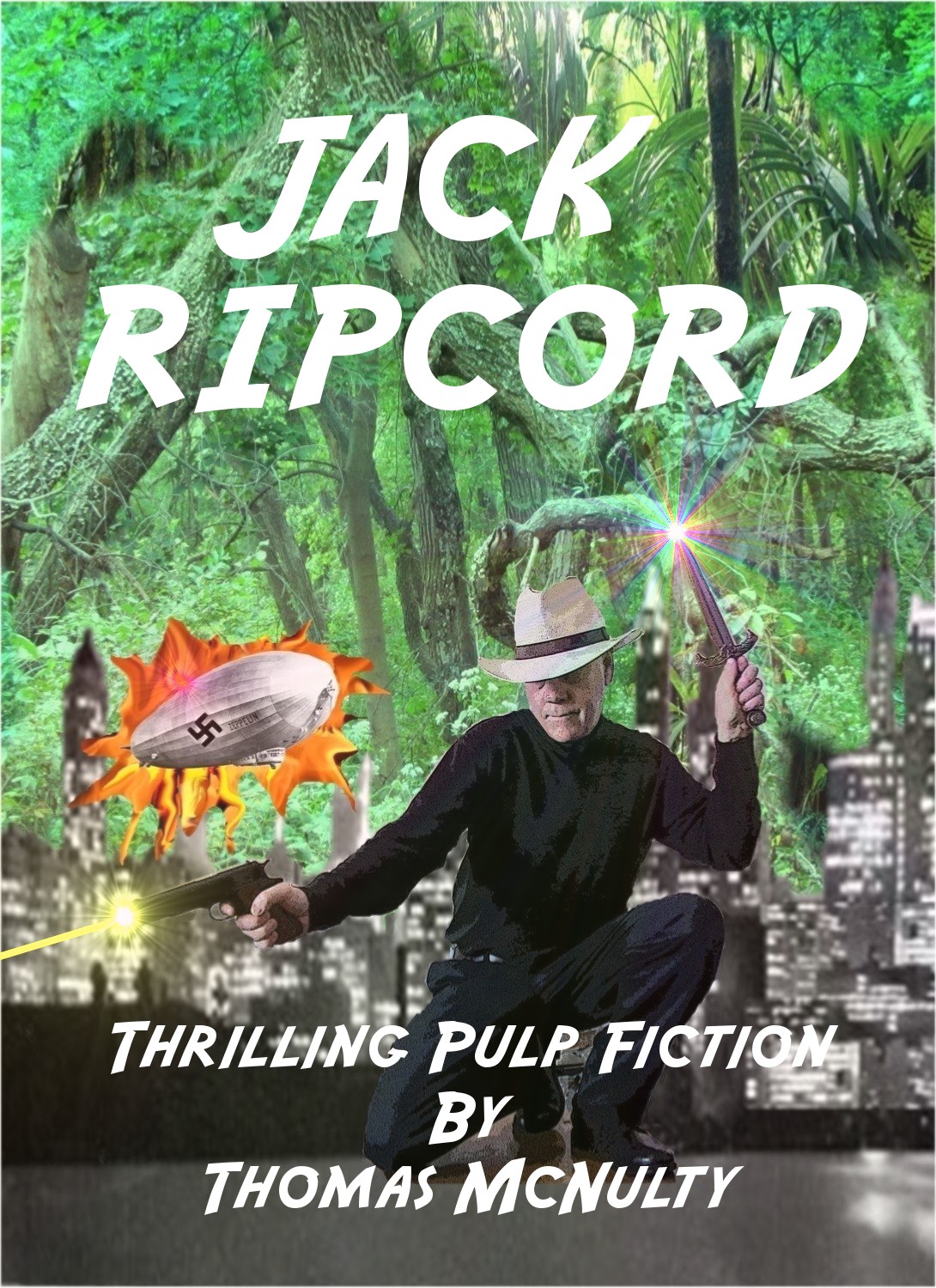 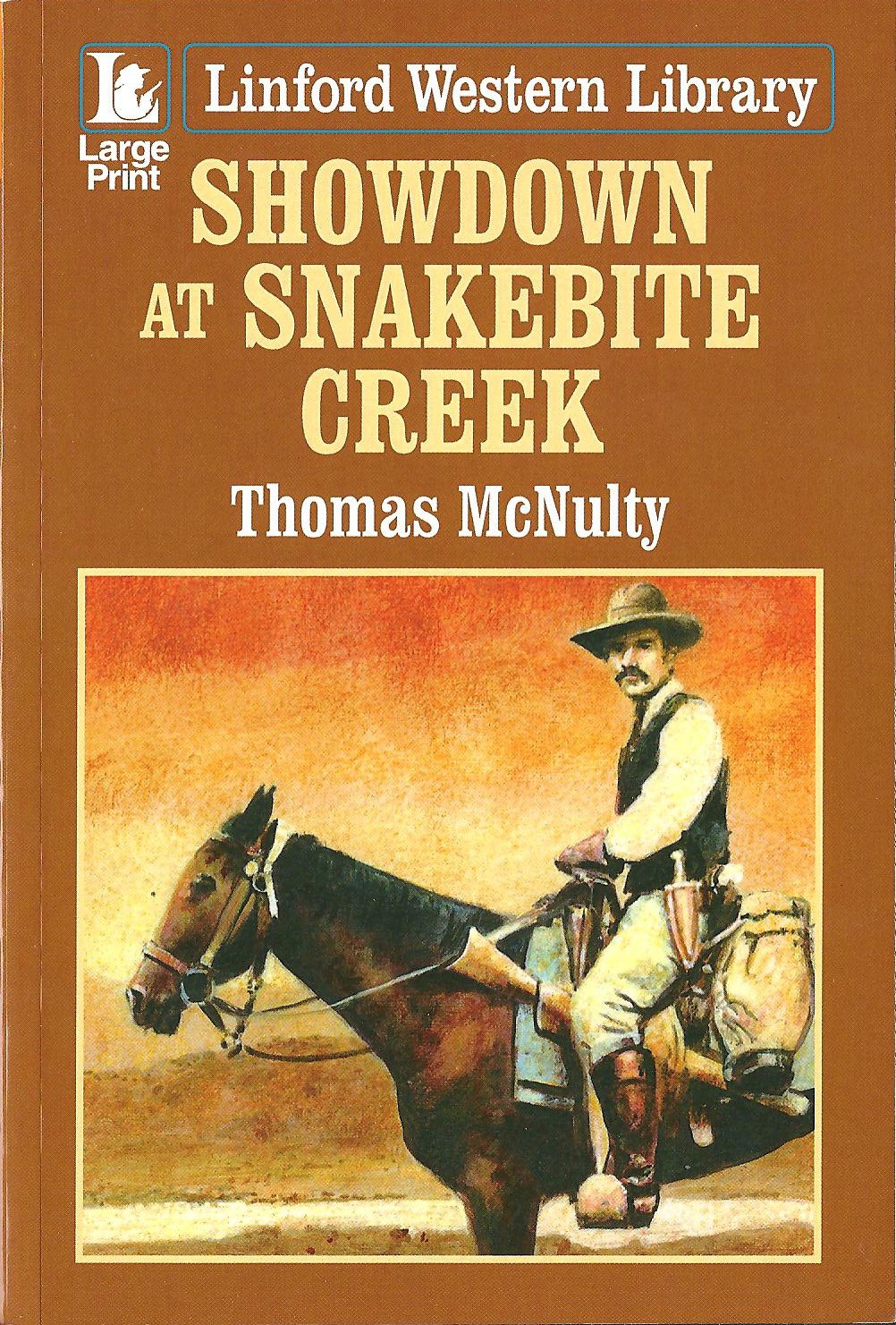 Pulp fiction is alive and well in the new millennium as a niche market fed by reprints of classic pulps, revivals of countless public domain properties, licensed continuations that protect aging copyright claims, and even new pulp fiction cut from the cloth of the classic originals. The evolution of western hero to an archetypal pulp hero has happened once more in this fringe market in the case of western author Thomas McNulty. 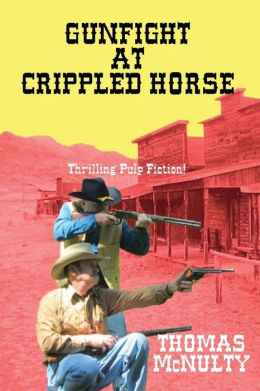 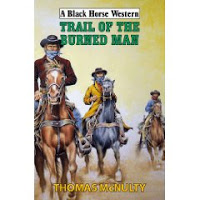 A veteran western writer in the Zane Grey and Louis L’Amour tradition, McNulty has made the transition from cowboy hero to pulp hero with his latest novel, Jack Ripcord. The title character for a planned trilogy of books, there is no mistaking that Jack Ripcord is an alter ego of the author from the cover character portrait to the way that the story functions as a synthesis of all of McNulty’s interests.

Apart from his western novels, McNulty has also authored a biography of swashbuckler Errol Flynn and a comprehensive history of werewolves. Both are evident in the pages of Jack Ripcord. The late 1930s setting is perfect for capturing the feel of a vintage chapter-play. Ripcord is a globe-trotting government operative, an adventurer, and the only hope against a secret Nazi occult cabal ready to unleash a bloodthirsty demon that could wipe out all life on the planet. If this sounds like Indiana Jones has wandered into the Cthulu mythos, that’s because I’ve failed to mention that Ripcord is ably assisted on his mission by a seductive witch and a savage werewolf. Imagine if Hammer Films had optioned a Doc Savage movie and you might have a better idea of how this plays out.

The great problem is that genre fans are often reluctant to venture outside of their comfort zones. Many western devotees would never pick up a Race Williams, Sam Spade, or Philip Marlowe mystery. Many art film buffs would turn up their noses at vulgar spaghetti westerns. The many millions who love Star Wars and Indiana Jones far outnumber those among their ranks who would venture to read or watch the works that inspired them, despite Lucas and Spielberg’s willingness to cite sources.

Even in the so-called geek subculture that has taken hold in the present day, there is a reluctance to experiment and break down biases that existed against the new, the old, the low budget, or the obscure. Elitism deprives us of not only broadening our tastes, but of experiencing countless pleasures. So it is that I challenge each of you to pick up Jack Ripcord, a book that deliberately blends genres as it seeks to defy easy categorization, and see if it doesn’t stand up on its own merits. Wounded Outlaw Books doesn’t have a multi-million dollar marketing campaign to back it, nor does McNulty offer name recognition to insure shelf space in brick and mortar stores. If your instinct is to look at the ingredients and dismiss this concoction without first sampling, think again. This particular Mulligan’s stew is delicious and I suspect those who are willing to try something new will be back for the second installment in the trilogy. I know I will.

I know of at least one SF writer (E.C. Tubb) who made the transition from writing Westerns to writing SF, which suggests some pulp writers just followed the money. When Westerns started to go out of fashion, they switched over to SF. Thinking about Tubb’s Dumarest saga, I can see a lot of the tropes associated with the Western, transplanted into an SF context, specifically, the solitary stranger as a force for justice. To be fair, the idea is pretty old – the knight errant being another classic example – and its appeal down through the ages may be due to the same factors: a distrust of the authorities to do what is right. Supposedly this was why the hardboiled detective was so popular as a character; because the American police force at the time was widely perceived (rightly or wrongly) as being corrupt and pro-establishment rather than pro-citizen.

Good piece, thanks for posting.

I hope I may be forgiven for getting off-topic for a moment, but I recently purchased a box-load of pulp westerns, dating from about 1940 to 1975. I skimmed a bunch, read two, sent a few on to John Hocking as a present, and began sticking the rest on eBay. Anyway: I was generally shocked by the laziness of the writing. Sometimes this came down to poorly constructed sentences or paragraphs, but more often than not it was more substantive things, like spending three early chapters in the company of a character who later bites the dust “off-screen” and isn’t given another mention. My faith in pulp westerns remains badly shaken — and this despite a deep and abiding love of western films.

But what I love about your post is your insistence that we as readers and bibliophiles need to get outside our comfort zone more often. Hear, hear. I do love adventure fiction, truly, but Black Gate is only the tip of the iceberg when it comes to the written word (as I’m sure even John O’Neill would be happy to admit), and to get the full effect of, say, Howard Andrew Jones or C.S.E.C. Cooney’s work, I find it downright essential to also read well outside the genre.

Okay, I’ll shut up now. (My soapbox broke under my weight.) But one final thought: I don’t think cinephiles are still down on spaghetti westerns. Time has told the tale, and told it well: even some of the really crappy Italian/Spanish westerns contain solid ideas, jarring scenarios, and exceptional Camus-like existential set-pieces. Spaghetti has gone mainstream (and it would have done so even without Tarantino, or so I hope.)

All true, Mark. Sorry your experience with those Westerns was disappointing.

But please recall that there are more westerns than there are examples of any other genre with the probable exception of Romance.
I’ve found that the general level of quality in Western pulp is just below the tolerance level of anyone who isn’t already enamored of the genre. So you really have to dig a bit to find the gems.
They’re well worth it, though. Elmore Leonard’s old Gold Medal Original novel Valdez is Coming is the best book I’ve read in years. Unforgettable.

Great article!!! Great review! I am a HUGE fan of Tom’s work — especially his westerns — as well as a friend. I just started reading Jack Ripcord, and am really enjoying it. He nailed it solid!

Thank you all for the comments. Glad the article touched a chord with readers. Regarding the quality of pulp writing being variable, there are examples of that even among some of the legends. Robert E. Howard, for all of his vivid descriptions of battles, could be very repetitious in his choice of words. Sapper, creator of BULLDOG DRUMMOND, could frequently be very sloppy with details. Jim Maitland is married off at the end of both books with the character with no reference to the first wife in the second book. The crown may belong to Guy Boothby, creator of DR. NIKOLA, who could mess up a character age or events in their lives on the same page. Even Alexandre Dumas was known to mess up the details over the course of his D’ARTAGNAN ADVENTURES, particularly where dates were concerned. Blame the editors. Besides, among Sherlockians reconciling such errors has become an art in itself.

I remember reading someplace that Dumas never mentioned weather. I haven’t gone back to re-read to see if that’s true.

John, regarding spaghetti soundtracks, I suspect the music actually led the way to the genre’s respectability, with Morriconne firmly out in front (as he deserves to be).

Romance: the genre that no mortal will ever ever ever be able to read all of.