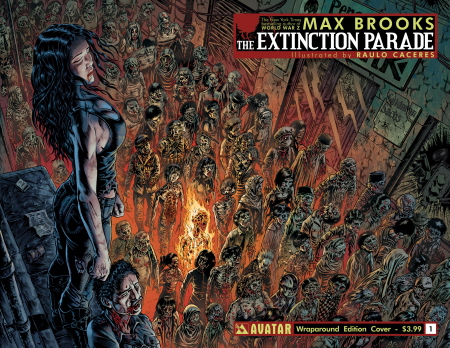 Anyone who thinks the whole zombie thing is at risk for falling out of pop-culture-vogue is underestimating the undead super powers of Max Brooks.

The World War Z: An Oral History of the Zombie War writer continues his current reign as king of the reanimated by reportedly signing his latest comic Extinction Parade to a TV deal, offering up what may be the first real, small-screen competition to The Walking Dead.

Bleeding Cool reports Brooks is in talks with “one of the most successful production companies in Hollywood,” though no one is even hinting at who that could be yet. But to really get our attention, Extinction Parade is going to need the no-holds-barred approach of someone like HBO rather than a network treatment.

NBC is resurrecting the made-for-CBS undead series Babylon Fields and The Sundance Channel is currently airing The Returned, both of which take a less violent look at zombies. But now with vampires in the mix, Brooks’s story definitely needs the creative freedom to back up the tanker of fake blood.

As humans wage their loosing fight versus the hoards of the subdead, a frightening realization sets in with the secretive Vampire race: our food is dying off. This is the story of Vampires’ decent into all-out war with the mindless hungry hordes of the zombie outbreak as humanity tries to survive them all. Three species in mortal conflict. This is how a species dies.

Have you read Extinction Parade and if so, what do you think? Personally, I’m impressed so far with 3 of ultimately 12 installments in print. And what network should take on the TV version? Post a comment or drop a line to sue@blackgate.com.