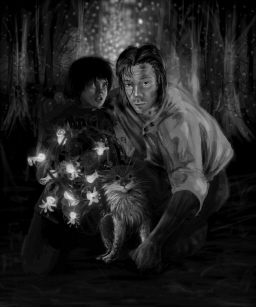 There’s a new sheriff in town. And he has a cat.

An entertaining, tongue-in-cheek fantasy… Their adventures take them from the rancid food of Burrow Deep Lane in the city of Ravanon to the workshop of a Tea-Making master then through the forests of Candelon, wherein lurks the Walker of the Woods, until they finally reach the ruined city of Vandelon. All the while, Gloren and the cat engage in constant, silent banter, much like two brothers or war buddies… I wanted more.

Steven H Silver’s tale of the strange astral adventures of Hoggar the Cremator, “The Cremator’s Tale,” extended its run at the top of the charts, taking second place this month.

Next was Mark Rigney’s adventure fantasy, “The Find,” the second part of the tale of Gemen the Antiques Dealer.

If you haven’t sampled the free adventure fantasy stories offered through our Black Gate Online Fiction line, you’re missing out. Here are the Top Twenty most-read stories in April.

The top fiction from March is here.

Congratulations to one and all involved. I am proud and honored to be part of such a wonderful fellowship!