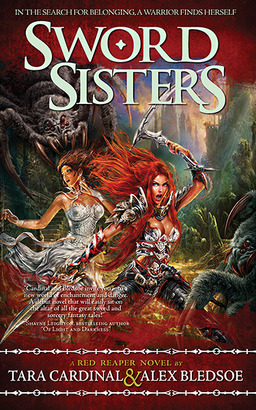 Black Gate is very pleased to offer our readers an exclusive excerpt from Swords Sisters, the new novel of heroic fantasy from Tara Cardinal and Alex Bledsoe.

Cast aside by her mother, tormented (literally) by her father, feared by humans and despised by most of her own kind, Aella is determined not to care. Not to care what they think, not to care if they like her, not to care about anything or anyone. Just so long as no one tries to touch her or imprison her again, Aella couldn’t care less.

Until… he pulled an arrow from Aella’s back and kissed her cheek. Until… she carried Aella home and stood between her and a giant spider. And a rioting mob. Until… they came to Aella looking for help. Aella, daughter of demon and witch, must find herself and forge her own route to a destiny she doesn’t want to believe and others simply don’t want. At first a heroine in name alone, Aella discovers she has the strength and the heart to control her demonic lineage and truly wear the title — hero. She also finds something even more valuable: friendship. Amelia, her Sword Sister, isn’t just worth dying for. She’s worth living for.

Tara Cardinal wrote, produced, and starred in the feature film Legend of the Red Reaper. She writes non-fiction for IndependentCritic.com and NerdRemix.com. Alex Bledsoe is the author of the Eddie LaCrosse novels (The Sword-Edged Blonde, Burn Me Deadly, Dark Jenny, and Wake of the Bloody Angel), the novels of the Memphis vampires (Blood Groove and The Girls with Games of Blood), and the Tufa novels (The Hum and the Shiver, Wisp of a Thing, and the forthcoming Long Black Curl). He is a regular blogger for Black Gate.

Thank you for hosting an exclusive look into the delightful tale that is SWORD SISTERS, John!

You’ve done a marvelous job with layout and information on both authors and RBE.

Your work is MUCH appreciated 🙂

You’re most welcome, Mr. Waltz. Thanks for offering us a sneak peek at RBE’s latest epic. We’re sure it will be a success!

[…] excerpt from Sword Sisters, by Tara Cardinal and Alex […]