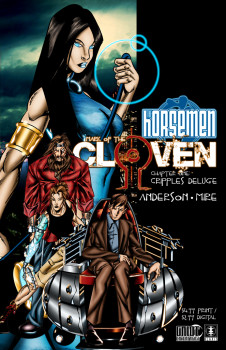 Mark of the Cloven is a nine-part illustrated novel set in the narrative world of Jiba Molei Anderson’s Horsemen series. The premise is that the ancient gods of Africa have set out to make their presence known in the world again. To this end, they have taken a sort of benign possession of seven human beings, not so much controlling their actions as giving them access to their forms and abilities. Basically, seven mortals are granted the powers of gods and use these powers to become superheroes. Of course, the existence of superheroes all but demands the equal presence of supervillains; chief among these villains are the Deitis and their superhuman children. At the start of this story, the seven god-blessed mortals are already well-known in this world; their influence has affected drastic social changes, resulting in Africa ascending to the dominant world superpower, as the United States falls into a new Depression.

Part one of this story opens with Djenaba, a doctor struggling to keep people alive in the remnants of Detroit, being asked by one of the god-mortals to help a boatload of refugees escape to Canada (in this world, America’s border patrols are focused on keeping people in, not out). In her aspect as water goddess Yemaya, Djenaba is guiding the rusted-out boat to the Canadian shore when she is attacked by three offspring of the Deitis, code-named Strain, Clarion, and Crate. All three of them are handicapped in some way, but Djenaba/Yemaya doesn’t underestimate them for long, because each has found a way to counter his or her handicap, turning weakness into strength. What follows is a series of fight scenes where our heroine struggles not only to stay alive, but also to protect the refugees (and even her three attackers).

The superhero comics came to prominence in the late 1930s, during the Great Depression. By setting the series in a new Depression, Jiba Anderson and Jude Mire evoke the very core of the superhero myth: the dream of having the power to make the world a better place. As a doctor, Djenaba is already in a position to improve the lives of others. We see just enough of her efforts at the story’s beginning to know that it is, essentially, a losing battle. As the quasi-goddess Yemaya, she has more power, but also attracts new problems in the form of supervillains. It goes back to the narrative device that keeps most superhero comics spinning their creative wheels indefinitely: all that great power only brings great obstacles that force the hero to exert more effort simply to maintain the status quo.

And on the subject of villains, we get three great ones in this story, visually realized by Jiba Anderson’s illustrations and given distinct voices through Jude Mire’s script. While they all share a common origin and goal, their motivations vary considerably, as well as the means each is willing to employ to achieve their shared goal.

The story is solid and straightforward, simple enough to give plenty of room for each character to shine. Unfortunately, there is no prologue or other device to give new readers a brief run-down of what has gone before. There have been other titles in the Horsemen series and, while this is largely a stand-alone book, you might want to check out the website for the basic premise before starting it. The biggest problem I had with the story was that the powers of all involved seemed vaguely defined (a common problem when the source of power is “magic”).

Of course, this is only the first chapter of the series, so we’re left with many questions. What exactly caused the downfall of America? Does the political ascension of Africa apply to all parts of the continent or are some nations more prominent than others? How much of the mortal personalities remain when our protagonists take on their god aspects?

Chapter two, Plague’s Ransom, will be available on January 8. You can pick up chapter one right now as a print comic ($4.99 at IndyPlanet), a watermarked PDF file ($2.99 at DriveThru Comics), or a Kindle-formatted e-book ($2.99 at Amazon). You can find out more about the series creator and illustrator, Jiba Molei Anderson, at the Griot Enterprises web site and more about the issue’s writer, Jude Mire, at his personal web site.