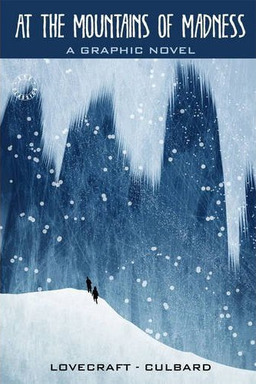 “At the Mountains of Madness” is one of my favorite Lovecraft tales. It was originally serialized in the February, March, and April 1936 issues of Astounding Stories; I was first exposed to it through the brilliant audio adaption from Dark Adventure Radio Theatre, which I listened to during a snowy commute through lonely back highways in Illinois in the winter of 2010. Marvelous stuff.

So in November, I was very intrigued to read James Maliszewski’s review of a recent comic adaptation by I.N.J. Culbard. Here’s James:

In 124 pages, Culbard succeeds in re-telling one of Lovecraft’s best tales in a fashion that’s both engaging and true to its source. That’s harder than it sounds…

Culbard deftly pares the story down to its essentials, in terms of action, dialog, and exposition. The story thus moves along at a fairly brisk pace, something that cannot be said of the novella, love it though I do. Second, the artwork, which, to my mind, recalls Hergé’s Tintin series, contributes greatly to a sense of narrative motion, which is vitally important in an adaptation of a long and complex story like this one. Furthermore, the artwork suits the subject matter perfectly, recalling as it does (at least to me) stories of late 19th and early 20th century exploration in the still-dark corners of the globe… Even though I already knew the plot intimately, I found Culbard’s strong, clear, almost innocent, illustration style gave it new life, something I didn’t think possible.

Sold! I especially enjoyed James’s description of artwork that recalled “stories of late 19th and early 20th century exploration in the still-dark corners of the globe.” I asked for the Culbard’s graphic novel version for Christmas and my lovely bride was kind enough to deliver.

We’re in the middle of a record-breaking cold snap here in Chicago (right on the tail of a ferocious winter storm that dumped six inches of snow on the city in the last 24 hours), so yesterday seemed like the perfect time to burrow under blankets in my big green chair, and enjoy Lovecraft’s classic tale of wintry cosmic horror. And that’s exactly what I did. 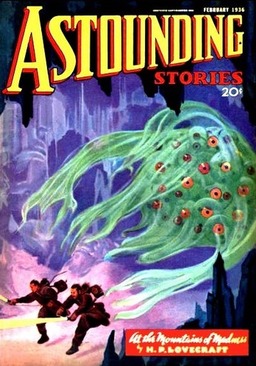 “At the Mountains of Madness” is one of Lovecraft’s most celebrated works. It tells the tale of an ill-fated Antarctic expedition from Miskatonic University, led by geologist William Dyer, that discovers a towering range of mountains on the frozen continent and baffling biological samples that don’t fit the existing fossil record.

Against Dyer’s advice, a small team flies west to establish a camp, where they quickly discover more fossils — and make a startling find in a cave that has been sealed for tens of millions of years. Dyer and the others listen on a wireless receiver with mounting excitement as the team reports their incredible findings… and then suddenly stops broadcasting.

Dyer and his graduate assistant Danforth lead a team to investigate and the horrors they find form the heart of the story. As the mystery deepens, Dyer and Danforth make a daring high-altitude flight through a high pass into the Mountains of Madness… and make one of the great finds in the entire Cthulhu mythos.

“At the Mountains of Madness” is deeply connected to the rest of Lovecraft’s Cthulhu fiction. There’s an itemized list of linked references in the Wikipedia entry for the story, but some of the highlights include shoggoths (which later appear in “The Shadow Over Innsmouth” and other tales), Elder Things (from “The Shadow Out of Time”), the coming of Cthulhu (“The Call of Cthulhu”), and the Mi-Go from “The Whisperer in Darkness.”

In addition, several important Cthulhu mythos characters are mentioned or alluded to in the tale, including Albert Wilmarth, main character in “The Whisperer in Darkness,” and the expedition’s sponsors Richard Upton Pickman (“Pickman’s Model”) and Edward Pickman Derby (“The Thing on the Doorstep.”)

Culbard’s adaptation is tightly focused, extracting the essentials of the tale without losing Lovecraft’s moody atmosphere. The dialog is crisp and I don’t remember “At the Mountains of Madness” feeling quite this fast-paced.

James is right about the artwork too. While at first I was a little underwhelmed, finding Culbard’s faces lacking detail — almost manga-like in their character rendition —  he won me over very quickly. Reading the original Lovecraft story brings you right back to the Heroic Age of Arctic exploration with its language and sense of place, and Culbard accomplishes precisely the same thing with his simple-seeming cartoon style.

Where Culbard may seem retro in his character design — bringing back memories of classic Depression-era Action comics — he is entirely sophisticated in his use of color and, especially, page design. He makes heavy use of a technique I’ve seen before, but never seen used so effectively… one panel on almost every page serves as a background, and all the others float above it, giving both an illusion of depth to the page, and an impressive sense of scale.

Have a look at the example at right, a series of close-ups of Dyer and Danforth as they gape at the Mountains of Madness. Virtually every page of the graphic novel is laid out like this: a highly detailed, full-page rendition of an eye-catching scene — a towering mountain range, ice-covered polar sea, crowded radio room, or shadowy ice cave — as the background, with cleverly placed panels laid on top.

This combination of retro-character models and clever page design gives the book a very modern aesthetic, like a faithful version of a 1936 pulp tale with up-to-date special effects. 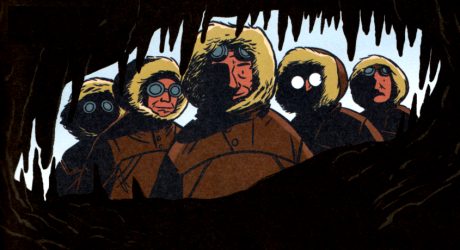 Design tricks and artistic successes aside, the graphic novel stands or falls on the impact of Lovecraft’s story and Culbard’s rendition delivers its payload very effectively. If you’re a fan of the original tale, you’ll enjoy the added impact of seeing some of Lovecraft’s signature monsters on the page in all their gooey glory.

And if you’re coming to the story for the first time, you’ll find the cosmic horrors Lovecraft set down in print are in no way diluted in their transfer into four colors.

Culbard has since produced two additional Lovecraft graphic novel adaptations: The Case of Charles Dexter Ward (April 2013) and The Shadow Out of Time (November 2013), and I very much look forward to getting my hands on them.

There are other comic adaptions of Lovecraft out there. I highly recommend Graphics Classics H.P. Lovecraft volume, which contains Matt Howarth’s brilliant 22-page rendition of “The Shadow Out of Time.” In fact, many of the Graphic Classics volumes are excellent and well worth your support.

At the Mountains of Madness: A Graphic Novel by H.P. Lovecraft and I.N.J. Culbard was published by Sterling Publishing in February, 2012. It is 124 pages, priced at $14.95. There is no digital edition.

I mentioned this when Maliszewski did his original review, but there’s a great coverage of this story on the H. P. Lovecraft Literary Podcast where Culbard was a guest on several episodes that covered this famous story.

I really enjoyed hearing Culbard’s insight into this tale. Since he worked on this graphic novel, he had thought about things that I had never considered before.

BTW, in general, the H. P. Lovecraft Literary Podcast is an excellent show. In addition to Lovecraft’s lesser known works, the podcast has put me on to a lot of great older pulp horror fiction. I highly recommend!

I’ve gotta say, based on your description of the artwork as Tin Tin-esque, and the featured images, I’m really not feeling this adaptation. The visuals seem overly cartoonish and tame and just don’t seem to fit the vibe I get from Lovecraft’s prose at all.

What I’d like to see is someone like Ben Templesmith adapt Lovecraft with his nightmarish, semi-abstract mixed-media style.

> BTW, in general, the H. P. Lovecraft Literary Podcast is an excellent show. In addition to Lovecraft’s
> lesser known works, the podcast has put me on to a lot of great older pulp horror fiction. I highly recommend!

Thanks for the rec! It sounds terrific, and I will definitely check it out.

> What I’d like to see is someone like Ben Templesmith adapt Lovecraft with his nightmarish, semi-abstract mixed-media style.

Oh, absolutely. I’d love to see Templesmith do “The Dunwich Horror” or “The Shadow Over Innsmouth”… or anything, really. He did such a fantastic job on DEAD SPACE (one of my favorite recent horror comics, even if it WAS a game adaptation) and, of course, WORMWOOD.

But I think you’re cheating yourself by not giving Culbard a second look. Yes, he has a very clean, almost cartoony style (it was James Maliszewski who compared him to Herge’s TINTIN, although I agree it’s an apt comparison). But all that does is lower your defenses, and let the true horror of the tale wallop you. Trust me, Culbard is more than capable of delivering the chills.