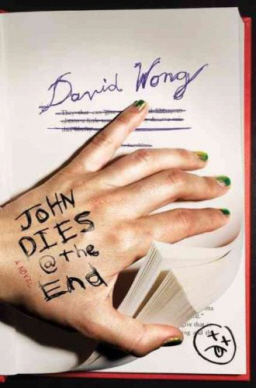 This book is the strangest thing I’ve ever read.

Within the first hundred pages, you’re treated to a seven foot man made of meat, wig monsters from another dimension, a man with the ability to communicate through a bratwurst, a dude taken over by small glowing alien things with a penchant for punching people in the balls, a hamburger that screams as you eat it, and a weirdo with a pseudo-Jamaican accent who can tell everything about you at just a glance.

And it never lets up from there; Wong somehow manages to produce a steady stream of balls-to-the-wall crazy throughout. It’s delirious, insane, and stark raving mad. If this book were a person, he would charge into the street and head-butt the first person he sees, before flying away with David Bowie and a dragon. This book is John Dies at the End by David Wong.

John Dies at the End follows the somewhat delirious exploits of David and his best friend, John, who’s never given a last name. This is where anyone else would talk about the plot, but it’s the kind of thing you need to actually read yourself to really appreciate. But I’m going to try anyway, just for you.

Dave and John are kind of like Ghostbusters, except with more swearing and fewer crappy sequels. They deal with paranormal occurrences in their town and its surrounding area, and in doing so have attracted something of a cult following, which arouses the interest of a reporter, Arnie, who interviews Dave about his experiences and the events leading up to him becoming a kind of paranormal detective guy. The story Dave tells Arnie is the story he tells us.

In short, he and John stumble across a drug called “soy sauce,” which heightens the user’s senses to an extreme level and gives them a window into another plane of existence. From here, the two embark on an adventure of Moorcockian proportions: uncovering a dark conspiracy, going to other planes, alternate dimensions, fighting aliens with a flamethrower made from a squirt gun, and meeting a supreme being called Korrok.

The plot’s fine, but it’s certainly nothing to gawk at. It has a way of seriously confusing you at times, and the whole thing feels episodic; characters will stay for a chapter or two before buggering off somewhere, never to be heard from again, and creatures will do the same, deciding they’ll stop at nothing to pick the brains out of David’s skull before giving up in the very next chapter, obviously distracted by a nearby ice-cream van.

The first 100 odd pages have literally no effect on the last 100 pages, and this makes everything feel unfocused, pointless almost, like the plot is just meandering around smashing its head on a wall for two hundred pages before moving to a different wall and doing exactly the same thing. It completely destroys what could have otherwise been a very powerful narrative. I mean, an enjoyable little fifty-page escapade in which David and John fight a 200-ft Brian Blessed with lasers coming out of his nipples might be fun, if it actually happened (God, that would be awesome), but, if after those fifty pages the status quo has been pretty much restored, I’d have to wonder what the point was. I wonder, in fact, why the book was published as a collection of somewhat related short stories, instead of a fully-fledged novel (which, I believe, was how the project began).

And then there’s the soy sauce itself: the author spends the first quarter or so of the book trying to make you curious about it, suggesting that maybe it’s an alien, maybe it’s alive, asking how it got here, and how it was made, all the while making weird cooing noises in your ear and waving his arms around. And, I must say it actually kind of works: I was genuinely curious about the soy sauce and its secrets… but then it’s more or less forgotten, occasionally referenced or used but never truly explained. It’s reduced from the focus of the story to the author’s go-to Deus ex machina halfway through the narrative, just because David Wong does what he feels like and he didn’t feel like delivering a payoff on half a novel’s worth of build-up.

That’s not to say it’s all bad plot-wise though. The book seems to find its focus towards the end, and it creates some genuinely interesting mysteries (like a strange body in David’s garage) with some seriously weird and creepy resolutions.

And it has absolutely no problem throwing a load of information in your face and expecting you to make sense of it. But that’s actually kind of fun; finally working out what those wig monsters were and where they came from, sussing out how that dog could keep exploding into little bits of terrier and keep coming back… The book is filled with those brilliant eureka moments. Moments when it all falls into place and everything suddenly makes sense, when you suddenly realize you’ve been spoon-fed clues all along and were too stupid to notice, when you feel like you’ve beaten the book and cracked its greatest mysteries. Yeah, those moments.

John Dies at the End weaves an epicly disjointed narrative, but if you think about it hard enough, it all makes sense, it all fits together, and that’s half the fun. That’s one of its biggest successes.

But that’s all little more then set dressing in the wake of what really makes this book so enjoyable: its sense of humor. It is sarcastic and self-aware, its naturalistic prose is filled with charm and brimming with personality, able to make even the most mundane situation (of which there are few) fun. I can’t tell you how many times this book had me laughing like a mad man on the train or in my garden or tucked up in bed.

Wong manages to cobble madcap slapstick humor, penis jokes, and pop culture parody into a novel and he does it well. Better than any other author I know, in fact. He’s just so overt in his intentions, so lacking in pretentiousness. The jokes aren’t concealed by seventeen different layers of subtext and subtlety; they don’t try to satirize culture or society. The book is simply trying to make you laugh. And it succeeds.

Of course, not everyone has the mental maturity of a twelve year-old, so not everyone will appreciate John Dies at the End’s humor and where I see charm; others may see sheer stupidity. So if shameless sex comedy isn’t your sort of thing, you should probably move along. In fact, John Dies at the End is something of an acquired taste; at times it seems like the book is trying too hard to be weird and its delirious plot may be too convoluted to enjoy.

But, for me at least, it has so much charm and personality and passion crammed into its pages that it’s impossible to hate. Sure, it lacks subtlety and maturity, but I don’t care, I’m laughing too hard.

I haven’t read the book (yet), but I really enjoyed the movie. Luckily, there were enough critics I find reliable who liked it, that I actually checked it out.

Allen: yeah, I haven’t seen the film; I think it was much bigger in america than it was here, still I might be able to find a copy of thr film. But the book’s fantastic, so that I can recommend 😀

John, if he remembers several of our conversations in the Black Gate comments sections, could probably tell you that I have literally thousands of books in my library waiting to be read. That is, I buy way more books than I have time to read; I expect them to be my retirement project. 😉

Yeah, I know way too much about buying books and not reading them, especially with fantasy where theres really cool stuff coming out all the time.
And kindles! How can you not buy that book when its been reduced to £2?
Still it helps me maintain the illusion that I’m well read. 😛