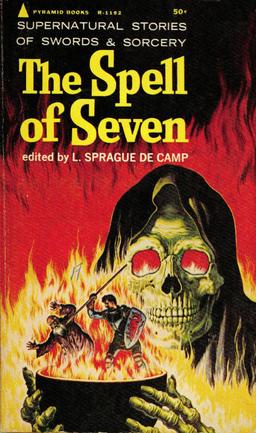 It takes real effort to keep on top of even a fraction of the exciting new work in the fantasy genre every week. Between the print magazines, online outlets like Subterranean and Beneath Ceaseless Skies, paperbacks, hardcovers, and self-published and independent work from talented folks just outside mainstream publishing, it’s exhausting. Luckily, it’s also extremely rewarding, and I feel fortunate indeed to be part of such a lively and vibrant branch of literature.

Of course, there are also weeks when I say, “The hell with it,” and settle in with a great vintage paperback.

This was one of those weeks. And the book that lured me away from the latest crop of promising new writers clamoring for my attention was L. Sprague de Camp’s The Spell of Seven, a slender sword & sorcery anthology from 1965.

I’ll admit up front that I thought that The Spell of Seven was a standalone title. I’m a child of the late 20th Century; when a book is part of a series, I expect the publisher to sell me on that up front. (It’s easier to mug me for more money that way.)

Fortunately, I have the collective hive-mind of Black Gate to call upon. One of the great lobes of that mind is Brian Murphy, who pointed out that the book was a follow-up to De Camp’s seminal S&S anthology Swords and Sorcery, and part of a successful series that would eventually evolve into a four volume survey from Pyramid Books covering the most important heroic fantasy of the time.

Here are Brian’s comments, taken from his 2011 review of The Fantastic Swordsmen.

Although many of its foundational writers had already sailed into the west, swords and sorcery reached a Weird peak in the 1960s. In 1961 Fritz Leiber coined the term “swords and sorcery” in the journal Ancalagon. The Swordsmen and Sorcerer’s Guild of America (can I get a membership, please?) began the first of its secretive meetings. And the Lancer published, L. Sprague De Camp and Lin Carter-edited Conan series with its splendid Frank Frazetta covers was everywhere…

I recently acquired read the third in the series, 1967’s The Fantastic Swordsmen. Its table of contents is a roll of some of the greatest sword and sorcery heroes of all time: Conan the Cimmerian, Elak of Atlantis, Elric of Menibone, and Brak the Barbarian. The authors herein are true giants of the genre with writing muscles to match the knotted sinews of their heroes. 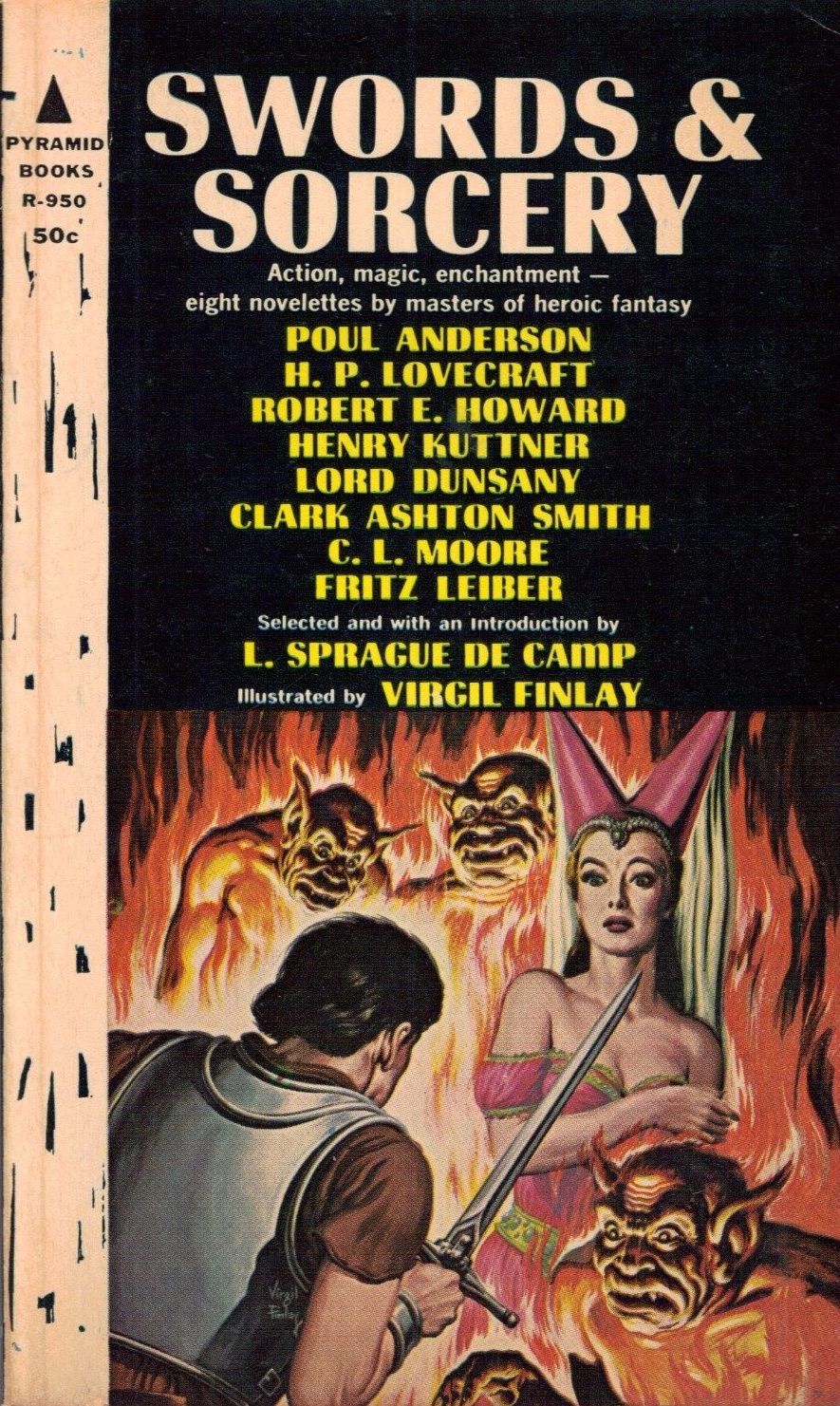 I greatly appreciate the sizable modern S&S anthologies like John Joseph Adams’s Epic, Jonathan Strahan and Lou Anders’ Swords & Dark Magic, and Hartwell and Weisman’s The Sword & Sorcery Anthology, all of which are 480+ pages in trade paperback, and any one of which is practically a library of sword & sorcery fiction all on its own.

Yet I still find that The Spell of Seven has one compelling advantage over them all: it’s short. At a slender 192 pages, it offers that rarest of literary treasures — a quick read.

Here’s the complete Table of Contents (with links to the story discussions at Wikipedia).:

Introduction: Wizards and Warriors,” by L. Sprague de Camp
“Bazaar of the Bizarre,” by Fritz Leiber
“The Dark Eidolon,” by Clark Ashton Smith
“The Hoard of the Gibbelins,” by Lord Dunsany
“The Hungry Hercynian,” by L. Sprague de Camp
“Kings in Darkness,” by Michael Moorcock
“Mazirian the Magician,” by Jack Vance
“Shadows in Zamboula,” by Robert E. Howard

The Spell of Seven was followed by The Fantastic Swordsmen (1967), and finally Warlocks and Warriors (1970).

The Spell of Seven was edited by L. Sprague de Camp and published by Pyramid Books in 1965. The cover was by the great Virgil Finlay. It is 192 pages, originally priced at 50 cents. Copies are a little more expensive today, but not much. I bought a virtually new copy last month on eBay for under $1, as part of a collection of 10 Pyramid paperbacks for $9.50.

This series was one of my first forays into older fantasy fiction. A quick check shows I don’t own Warlocks and Warriors, which I will correct immediately, so thanks for that!

These look great. Pyramid also published a couple of volumes collecting stories from Unknown that are well worth seeking out.

> This series was one of my first forays into older fantasy fiction.

I wish I’d been lucky enough to read it earlier! The Spell of Seven was published the year after I was born, so I’m sure there were copies around when I started collecting. But I didn’t run across it until fairly recently.

Like a lot of vintage fantasy paperbacks, copies are generally less expensive than a new paperback… but that doesn’t mean they’re easy to find.

> Pyramid also published a couple of volumes collecting stories from Unknown that are well worth seeking out.

Do you mean these? If so, you’re absolutely correct!

I love all of these collections; I especially love the Finlay illustrations.

I also didn’t get to them until later in my reading career, but coming to them after the fact I can see how they really helped define S&S as a genre.

That’s a great point, and I wish I’d made it. While we may argue its boundaries, we take the existence of the sword & sorcery genre for granted today — but it didn’t exist until folks like Fritz Leiber and — especially — L. Sprague de Camp defined it in the 60s.

I’ll have to think and check when I get home, but I don’t think I have this one. I’ve got the other Pyramid titles in this series.

I always sought them out anytime I found a second hand store I’d not visited. In the 80s and 90s, these collections were often the only way to find copies of work by authors who were out of print, such as Kuttner and Brackett. I’ve even got a mystery anthology with a story by Manly Wade Wellman that I’m not sure is in his collections. Need to check that, too.

> I always sought them out anytime I found a second hand store I’d not visited. In the 80s and 90s, these
> collections were often the only way to find copies of work by authors who were out of print, such as Kuttner and Brackett.

I’m curious why these were never reprinted. Just based on the comments here, they certainly seem popular. Pyramid Books still exists today, although they changed hands several times (and changed names once).

They were sold to Walter Reade in the late 1960s, then became part of the massive Harcourt Brace in 1974. Pyramid was renamed Jove in 1977; two years later Jove was sold to Putnam Berkley Group, which is now part of Penguin Group (got all that?)

On second thought, the contracts are probably lost in a drawer that hasn’t been opened since 1972. No wonder they’ve never been reprinted.

Those are the ones, John. That’s what I get for not reading EVERY article!

De Camp gave a copy of the first collection, the “Swords and Sorcery” anthology, to J. R. R. Tolkien.

According to de Camp, Tolkien said that he “rather liked” the Howard story, which was “Shadows in the Moonlight.” This appears to be the germ from which grew the highly exaggerated claim, in Lin Carter’s “Look Behind” book on Tolkien, that Tolkien had read and liked the Conan stories. In other words, a remark de Camp related about one story — perhaps just a polite comment at that — became the basis for a much bigger claim.

Tolkien did get the book, though — no doubt about that:

But it was the Dunsany story that seems to have interested Tolkien most.