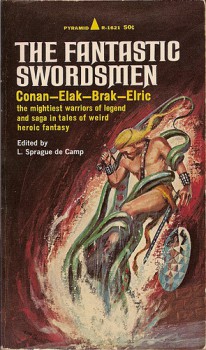 For those who put entertainment first, heroic fantasy offers it in its purest form.
— L. Sprague de Camp, The Fantastic Swordsmen

Although many of its foundational writers had already sailed into the west, swords and sorcery reached a Weird peak in the 1960s. In 1961 Fritz Leiber coined the term “swords and sorcery” in the journal Ancalagon. The Swordsmen and Sorcerer’s Guild of America (can I get a membership, please?) began the first of its secretive meetings. And the Lancer published, L. Sprague De Camp and Lin Carter-edited Conan series with its splendid Frank Frazetta covers was everywhere. These were heady times for the genre. Although the mass-produced works of the era can still be readily found and enjoyed today, I can only imagine when books like The Swords of Lankhmar could be found in drugstore wire spinner racks and the like.

I recently acquired read the third in the series, 1967’s The Fantastic Swordsmen. Its table of contents is a roll of some of the greatest sword and sorcery heroes of all time: Conan the Cimmerian, Elak of Atlantis, Elric of Menibone, and Brak the Barbarian. The authors herein are true giants of the genre with writing muscles to match the knotted sinews of their heroes. Here’s the TOC in full:

In a recent reading of The Fanastic Swordsmen I was struck by a few things. First, how much story each of these tales packs in, as opposed to, say a bloated volume of The Wheel of Time. Second was the almost uniform high quality of the writing. Only the Jakes story was a let-down (he may have hit it big with North and South, but I found “The Girl in the Gem” to be pretty derivative, uninspired stuff). The rest was flat-out awesome, lean but suffused with dark poetry and bright blades blooded with battle.

The dedication to Poul and Karen Anderson — the former of The Broken Sword and Hrolf Kraki’s Saga fame — is a nice opening touch, and very appropriate. De Camp’s brief introduction is also spot-on. In it, he argues that unlike “respectable” literary novels, the primary objective of S&S is to tell a good story and entertain the reader. S&S can do something more (and the best stories in the genre certainly do that), but story is paramount. It certainly is in the tales to follow.

Choosing a favorite from his star-studded lineup is tough. “The Fortress Unvanquishable Save for Sacnoth” is a must-read for students of S&S who are interested in its earliest incarnations. Written in 1908, this tale of a warrior who fights a dragon and the evil Lord Gaznak is arguably the first story to include all the necessary elements of the genre. Dunsany’s strength is without a doubt his style, which is instantly recognizable, oft-imitated but never duplicated.

“Black Lotus,” while a bit out of place here (there’s no swordsmen, just a drug-addled sorcerer) contains a strong element of horror, one of the defining characteristics of the swords and sorcery genre. Likewise “The Other Gods” contains no swordsmen, but otherworldly horrors in Lovecraft’s dream world of Kadath.

I also greatly enjoyed “The Tower,” featuring (to me) heretofore unknown Italian writer Luigi de Pascalis. It’s an allegory, the meaning of which de Pascalis decodes in an afterward. I liked this story as it shows what S&S can do in addition to rousing storytelling.

The one story that sticks in my craw from the collection is “Drums of Tombalku.” It’s a tale that Howard began but eventually abandoned, and which De Camp saw fit to edit and finish for The Fantastic Swordsmen. “Drums” begins as a perfectly fine weird tale about a girl who flees an ancient, demon-haunted city and falls into the clutches of desert bandits before being rescued by the warrior Amalric (you can read the original untitled fragment in The Bloody Crown of Conan by Del Rey). But when it abruptly morphs into a story about a conflict between warring factions of the riders of Tombalku, it falters. Howard rightfully abandoned it; De Camp’s decision to finish the story renders “Drums of Tombalku” as one of the weaker entries in The Fantastic Swordsmen. Given the large output of completed Howard material he could have chosen, I’m not sure why De Camp went with “Drums.” My cynical side says it allowed him to take a co-byline. Unfortunately the end result only adds to De Camp’s reputation as the most divisive figure in Howard circles (arguably surpassed by Marcus Nispel).

If I had to go with a champion from this lineup, it would probably be Henry Kuttner’s “Dragon Moon.” Kuttner — hardly a household name in comparison to the other heavyweights in this volume — nevertheless offers what I thought was the best tale in the book. 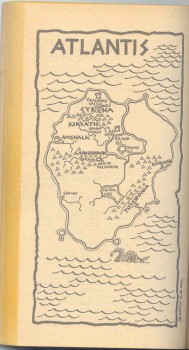 Despite its brevity “Dragon Moon” reads like a mini-epic (see the map of Kuttner’s world at right) while still preserving all the elements I love about weird fiction — grittiness, blood, dangerous magic, elements of horror, and fast-paced action. When tales feature recurring characters like an Elak or a Conan, we know the hero will live on. The danger is when the author slips into a tired formula. What sets apart great swords and sorcery from the merely average is the execution. This is where “Dragon Moon” succeeds. Kuttner uses evocative quotes from the likes of Chesterton and the book of Revelation to lead off each section, for example. The opening paragraph sets a wonderful tone (and sight, and smell) of adventure that never lets up:

The wharf-side tavern was a bedlam. The great harbor of Poseidonia stretched darkly to the southeast, but the waterfront was a blaze of bright lanterns and torches. Ships had made port today, and this tavern, like the others, roared with mirth and rough nautical oaths. Cooking smoke and the odor of sesame filled the broad low room, mingled with the sharp tang of wine. The swarthy seamen of the south held high carnival tonight.

There are some absolutely stunning scenes in here. One of my favorites is Elak visiting a sea goddess in an encounter charged with danger and mystery and an undercurrent of sex (in exchange for her help, Elak must spend a moon “drinking of her strength” — I’m game). Another is Elak on the dragon throne of Poseidonia, wreathed in an eldritch flame that tests his sovereignty. It’s a superbly rendered scene and must be read in the context of the tale to be fully enjoyed.

In short, The Fantastic Swordsmen is exemplary storytelling from a receding age, still hale and vital and not to be missed if you can find a copy.

Do you think there is still a viable market for S & S? As I wend my way through my WIP, I’ve been struggling to position it, from a sub-genre standpoint.

But your descripton above of “grittiness, blood, dangerous magic, elements of horror, and fast-paced action” (and also a smidgeon of sex) seems a pretty good description of what has come flowing out thus far. And it’s a much better fit than “dark epic fantasy” which, as a description, seems a tad over-used these days.

As a follow up, do you think the form is sustainable (and interest maintainable) in a multi-volume format?

And while I hope for an opinion from Mr. Murphy, anyone is of course welcome to chime in.

I was just about to mention books by PYR. Enge’s Morlock stories. Joe Abercrombie’s stuff, while the story-lines are on a more global scale than S&S, Ihttp://zornhau.livejournal.com/friends/ think they have the same heart.
Also check out the anthology Swords & Dark Magic anthology that came out last year. Although, it is a more modern take on the sub-genre.
I think there is many fantasy readers are getting weary of the big, tomb-stone sized, everlasting epic series, the teenie-bopper vampires, and the chic-lit urban fantasy, so there is definitely a place in the market for S&S.

I had the opportunity to read an excerpt from Lou Anders’ foreward to the above-mentioned Swords and Dark Magic anthology, and in it he specifically calls out Black Gate as the current keeper of the flame for S & S (my words, not his, I navigated away before thinking to quote it exactly.)

So, clearly, the folks here think S & S is a viable genre, but can works in that vein be critically accepted and commercially sucessful, or is S & S still relegated to the “back of the book”, so to speak? (Abercrombie notwithstanding)

Regardless of any opinions rendered, I won’t change the sytle of the tale I’m telling, but the forecast may alter how I categorize it, especially if an S & S label still causes eye rolling, etc. in professional circles.

My response is that S&S is totally viable, at least always deserving a niche when not mainstream. I blame entirely the increasingly controlled media that first attacked it when they were implementing PC then did everything possible to lame it out and ruin it when despite decades of bashing it still has quite a fan-base and so there’s demands for it. What is needed is for writers to bypass publishers and to “open” this closed market. If “Lame, PC S—” had to actually compete, it’d lose hands down. SW&S was doing great, like “Men’s Adventure”, till the plug was pulled.

There is a market for swords and sorcery, provided that it’s written well. I suppose the same could be said for any genre–good writing is what sells, not following a formula. The stories in The Fantastic Swordsmen are (almost) uniformly excellent because they were written by talented authors.

That said, I do agree with Kid_Greg:

I think there is many fantasy readers are getting weary of the big, tomb-stone sized, everlasting epic series, the teenie-bopper vampires, and the chic-lit urban fantasy, so there is definitely a place in the market for S&S.

Count me in this group. I’m growing increasingly less tolerant of five and seven-book bloated series, written that way for the sake of filthy lucre. “Worldbuilding,” my ass.

I think the market is better for, and more appreciative of, sword & sorcery than it has been for a couple decades.
A distinctive twist on the genre seems necessary though– you don’t see a lot of Conan-clones out there these days.

Yeah, I’ve been weary of the multi-volume mega-fantasies for years. I’m not suggesting long stories can’t be great stuff, it’s just there were far too many times I’d get the sense that the author was biding his time, filling up space, putting the story on idle while he saved the good stuff for volume seven. I’m an old geezer and can’t afford to burn my life away reading dross.

Actually, one of the most notable things I found in Abercrombie’s trilogy was not the controversial anti-heroic stance, but the author’s strikingly powerful narrative drive. The three volumes felt half as long because the story just kept moving.