Back in the day, there was a pretty reliable formula for a successful science fiction anthology.

Went like this: Step one, find a fresh theme. Could be anything. Unicorns, space dreadnaughts, cats (cats were always a good choice). Step two, find a bunch of science fiction stories. Step three, put Isaac Asimov’s name on the cover.

In 1978, Asimov put out his first anthology with Martin H. Greenberg, who was famously gifted at the production side of things, and over the next decade or so they published over a hundred together, usually with Charles G. Waugh, a psychology professor in Maine. Charles picked the stories, Isaac wrote the intros, and Marty did everything else.

They also had eye-catching covers by Jerome Podwil, which were a significant draw (they certainly were for me, anyway).

One unusual aspect of these books is that the introductions weren’t by Asimov (in fact, it’s not immediately obvious what contribution Asimov made, if any.) Martin H. Greenberg provided the intros for both, and in my opinion he did a decent imitation of Asimov’s breezy, humorous style. Here’s a snippet from the into to The Seven Deadly Sins of Science Fiction.

Well, we, the editors, do read and enjoy science fiction and, activated by Brotherly Love, we would bring the joy to others. Possessing Meekness and Temperance, we do not claim to have achieved perfection; possessing Chastity, we know out results to be pure; and possessing Diligence, we know we have done the best we can.

For we have labored beyond measure to observe and classify; we hypothesize you will enjoy the results, and it is for you to test it. Here we have stories which, in the science-fiction mode, exemplify and illustrate each of the Seven Deadly Sins, and give each a dimension perhaps not thought of by Saint Thomas Aquinas.

Here’s the inside cover text for both books.

The Seven Deadly Sins of Science Fiction was published first. It contains a long novella by Frederik Pohl, a Robot story by Isaac Asimov, a Nicholas Van Rijn novelette by Poul Anderson, and much more. Here’s the complete TOC. 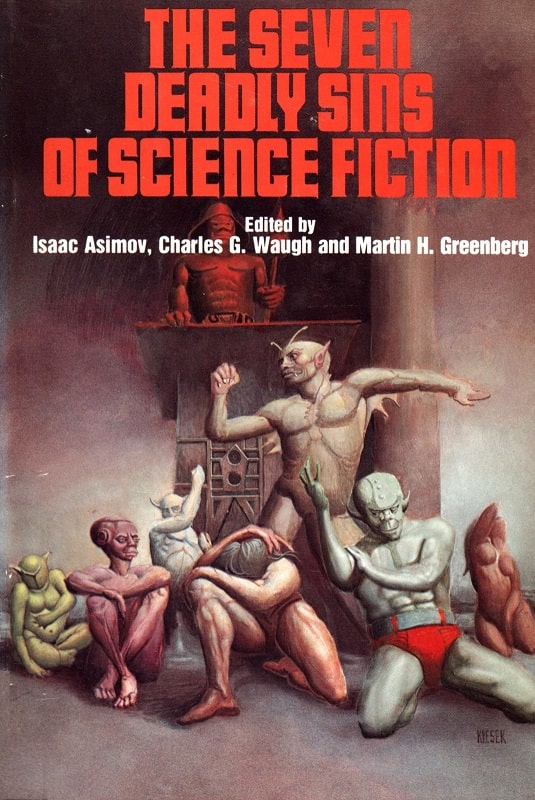 Both books were paperback originals from Fawcett Crest, with covers by Jerome Podwil. The SFBC produced a hardcover edition of The Seven Deadly Sins of Science Fiction in 1981. There are no digital editions.

Our previous coverage of Asimov, Greenberg, and Waugh includes:

we need a website that works like justwatch where you type in a tittle and it shows where that story has been published and if it is available in print/ebook still or not, then if not it links to a few of the used book sites and you can click on those like you would click on hulu or whatever in justwatch and it took you sirect to the page to buy it.

i cant get hese collections in ebook but maybe the individual stories might be available in other ebook places. haha

I use the Internet Speculative Fiction Database to find where stories have been reprinted, including digital editions:

Not always instant gratification, but when combined with eBay and Abe Books, I can usually get what I want in a week or so. 🙂