Isaac Asimov had a lot of gifts. He was a world famous polymath, a marvelous science explainer and popularizer, and a pretty darned skilled writer of science fiction. But he doesn’t get a lot of credit for one of his greatest talents, a skill in short supply even today: The man knew how to sell anthologies.

After some of his early SF anthologies became enduring top-sellers, often remaining in print for decades (including The Hugo Winners, Volume I and II, Before the Golden Age, and Where Do We Go From Here), publishers discovered that the name Isaac Asimov on the cover of an anthology almost guaranteed it would sell.

Asimov exploited this heavily for the remainder of his career, lending his fame to many important anthology series, often co-created with frequent collaborators Martin H. Greenberg and Charles G. Waugh. These include The Great Science Fiction Stories (25 volumes in 23 years), Isaac Asimov’s Wonderful Worlds of Science Fiction (10 volumes in 8 years), and Isaac Asimov’s Wonderful Worlds of Fantasy (12 volumes in 9 years). It’s that last one we’re going to look at today, with one of the final volumes: Ghosts, published by Signet in 1988. 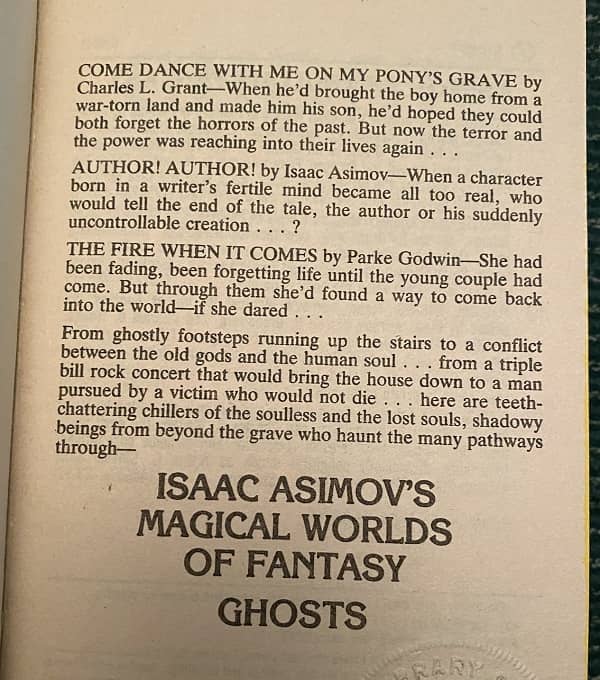 Sometimes I wonder if it was Asimov’s obvious love of short form science fiction, and his almost singular ability to sell it, that helped keep science fiction magazines thriving in the 70s and 80s, and even into the 90s.

There are a lot of reasons that science fiction print magazines have experienced a three-decade long readership decline that began in the early 90s, and many of them have to do with the enormous changes in magazine distribution in this country, and the rise in other forms of entertainment. But sometimes I wonder if Asimov’s death in 1992 — caused when he contracted AIDS from a blood transfusion — prematurely took the most vocal and energetic promoter of quality short SF off the playing field, and that contributed mightily to a decline brought on by other reasons.

Whatever the case, Asimov published well over a hundred SF and fantasy anthologies, and they are a huge and enduring part of his legacy. Say what you want of his own fiction; he had superb taste as an editor, and in choosing his tireless collaborators. The anthology series he created with Greenburg and Waugh introduced thousands of readers to SF, and to numerous science fiction writers old and new. They are highly readable and enjoyable even today and — not coincidentally — remain highly collectible. 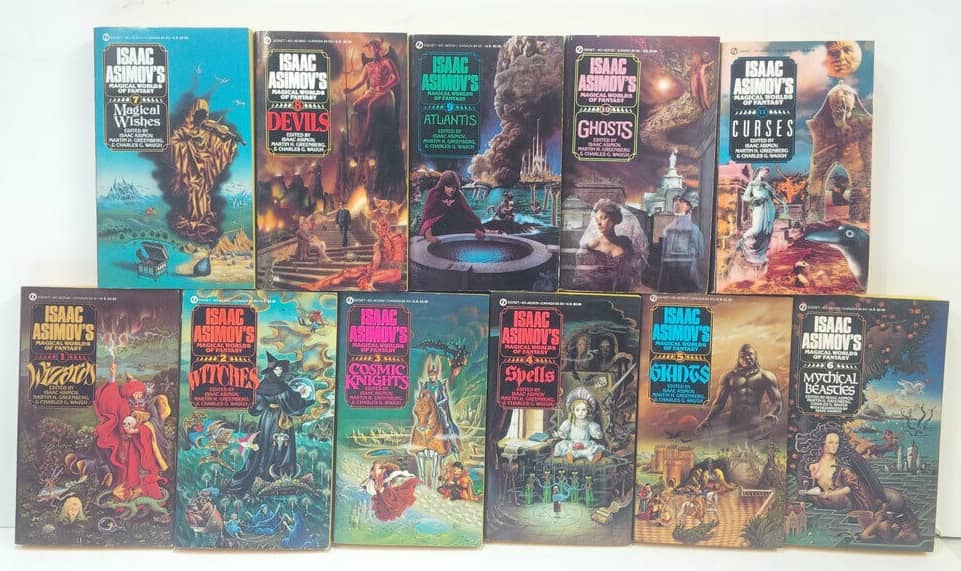 There are a dozen volumes in Isaac Asimov’s Magical Worlds of Fantasy. The first eleven were published by Signet between 1983 and 1989; the final book (Faeries) didn’t bear the Signet logo, but was published two years later by New American Library’s Roc fantasy imprint instead. 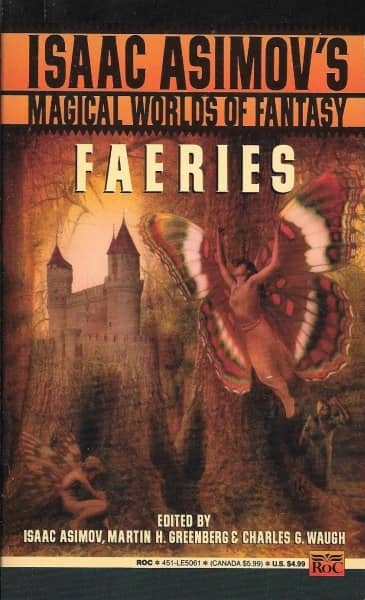 Here’s the complete list of titles in Isaac Asimov’s Magical Worlds of Fantasy.

Introduction by Isaac Asimov
“Ringing the Changes” by Robert Aickman (The Third Ghost Book, 1955)
“Author! Author!” by Isaac Asimov (The Unknown Five, 1964)
“Touring” by Jack Dann and Gardner Dozois and Michael Swanwick (Penthouse, April 1981)
“The Wind in the Rose-Bush” by Mary E. Wilkins Freeman (Everybody’s Magazine, February 1902)
“Come Dance with Me on My Pony’s Grave” by Charles L. Grant (The Magazine of Fantasy and Science Fiction, July 1973)
“The Fire When It Comes” by Parke Godwin (The Magazine of Fantasy & Science Fiction, May 1981) — Hugo and Nebula nominee, World Fantasy Award winner
“The Toll-House” by W. W. Jacobs (The Strand, April 1907)
“The Invasion of the Church of the Holy Ghost” by Russell Kirk (The Magazine of Fantasy & Science Fiction, December 1983)
“A Terrible Vengeance” by Mrs. J. H. Riddell (Princess Sunshine and Other Stories, 1889)
“Elle Est Trois, (La Mort)” by Tanith Lee (Whispers IV, 1983)
“A Passion for History” by Stephen Minot (The Sewanee Review, Spring, 1976)
“Daemon” by C. L. Moore (Famous Fantastic Mysteries, October 1946)
“The Lady’s Maid’s Bell” by Edith Wharton (The Descent of Man and Other Stories, 1902)
“The King of Thieves” by Jack Vance (Startling Stories, November 1949) 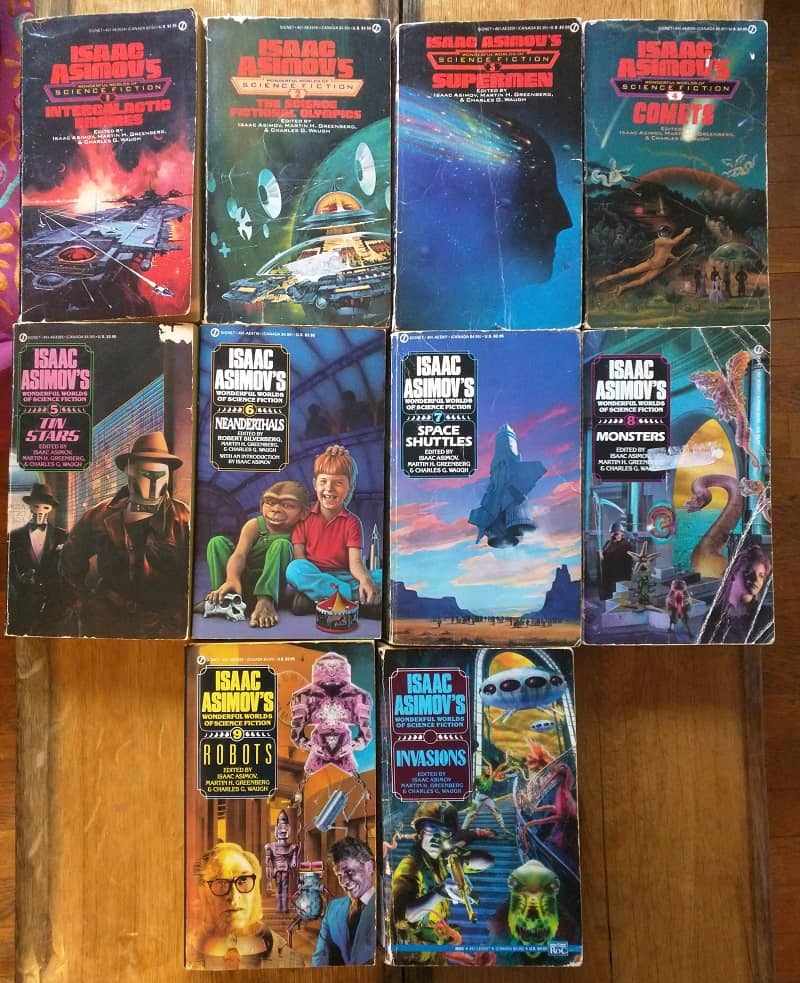 We covered the companion series earlier this year:

Ghosts was published by Signet/New American Library in December 1988. It is 348 pages, priced at $4.50. The cover is by JK Potter. It was reprinted in the UK two years later by Robinson. There is no digital edition; it has been out of print for over 30 years.

These articles depress me and elate me in equal measure. They depress me because they remind me that the days of tons of great anthologies being published every year are over; they elate me because they remind me that you can find great anthologies on Ebay and other places for practically nothing. (Lately I’ve been picking up those terrific Alfred Hitchcock mystery anthologies of the 60’s – which usually included a smattering of fantasy and sf – for very reasonable prices, and what great collections they are!

I miss the days of mass market anthologies too. I don’t think I realized just how much I depended on them to discover new writers until they were gone. Even today I’m reluctant to hand over $25 for a novel by a new author unless I’m acquainted with their short fiction…. and not a lot of novelists today WRITE short fiction.

It was the Wizards anthology that introduced me to Jack Vance, who has been my chronic favorite author ever since. I had forgotten it was Asimov’s name on the cover, so thanks for this.

I remember the days when it was possible to discover authors like Jack Vance in paperback reprint anthologies! That’s how I was introduced to Edmond Hamilton, Robert E. Howard, H.P. Lovecraft, Fritz Leiber, Clark Ashton Smith, Poul Anderson, H. Beam Piper, Eric Frank Russell, and on and on.

Nowadays I suppose the internet fills that niche. I hope it does, anyway.