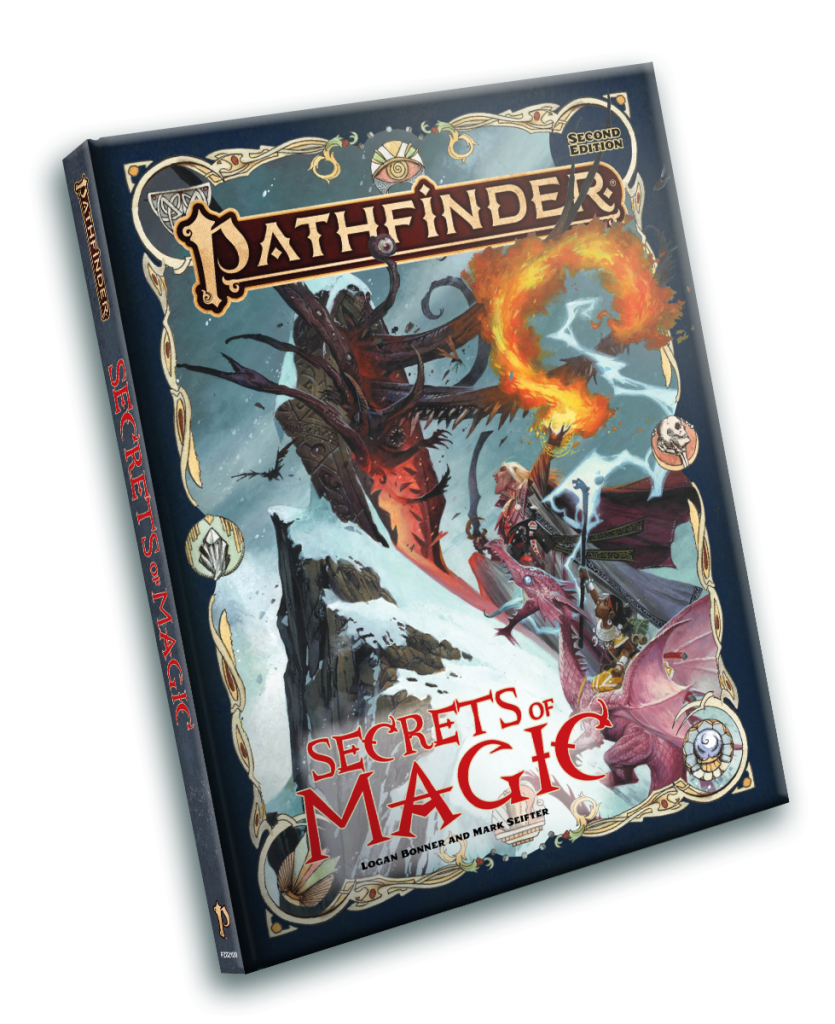 A lot of Pathfinder books start by diving into classes, and one thing of note in Secrets of Magic is that it starts in a very different place. The first chapter, Essentials of Magic, is a 20-page dive into the in-world magical systems There are a series of 2-page overviews on the underlying four magical traditions at the core of Pathfinder’s magical system: arcane, divine, occult, and primal. These are written as famous documents that the characters can study, helping to influence their roleplay of how their character views magical philosophy. This then extends into a four-page essay “On Essences” that discusses how Matter, Mind, Spirit, and Life interact in the fundamental underlying nature of magic, followed by 1-page entries on each of the common schools of magic.

For a book that is clearly very firmly rooted in new mechanics and systems, it’s nice to start out with sections that are so embedded in the flavor and setting of the game, rather than diving first into the rules. This is a 255-page book, and there’s plenty of time to get to the rules of playing the game … but I’ve played with a lot of people newer to RPGs who really view magic in the game the same way they view it in a video game, without thinking about the fact that they’re playing a character who is steeped in this stuff, and believes in it so deeply that they can bend reality to their will because of the power of that belief. This material really provides some foundation for both GMs and players to do what the whole book is aimed at … making the magical systems living, embedded components of the setting.

From there, the book proceeds to character creation information, with new backgrounds (including some rare backgrounds) that are particularly useful for magical characters, or even for non-magical characters who may be playing in a highly magical game. Then we have the Magus and the Summoner. Both of these classes were originally in Pathfinder First Edition and are making their Second Edition debut.

The Magus is a highly physical magic-user, who can channel magic through their weapon in the form of a Spellstrike, which deals the damage from both the spell and the weapon strike as a combined attack. A Magus can also enter an “Arcane Cascade” stance, that allows them to use their magical power to add some extra magical damage to their weapon attack. So, for example, the Magus uses their Spellstrike to cast a spell that deals fire damage. They then enter the Arcane Cascade stance, and now their weapon attacks (so long as they remain in the stance) count as magical attacks and deal some extra fire damage. For customization, the Magus selects a “hybrid study” that makes them more proficient in certain combat situations, either when wielding two-handed weapons, fighting unarmored, wielding a shield, using a ranged weapon, or using a staff.

The Summoner, as the name implies, is a master of conjuration magic, but the key ability of the class is a connection to a being, called an eidolon, which they can summon from another plane to fight alongside them. These eidolons can be Angelic beings or linked to the fey realm, a vengeful shadow spirit or a mental construct from the astral plane. The rules for these are open enough that they allow you to play a lot of difference concepts, as the link could be forged in different ways. You could be a nature-based character who summons a beast, fey, or plant eidolon, or a soldier who’s tormented by a fallen comrade who just won’t leave, or a devout whose piety is rewarded by a servant. The tradition of magic that the Summoner character wields is based on the metaphysical nature of their eidolon, and the type of energy they are drawing from through that connection. Eidolons are highly customizable, and the class feats for Summoner really don’t grant the Summoner new abilities so much as grant them new ways to use the eidolon.

The book includes archetypes allowing for multiclassing into both of the new classes, and then dives into chapters on new spells, rituals, and magical items. A couple of cool new types of magical items are introduced. Spell catalysts are consumable magic items that modify certain spells. For example, using firestarter pellets when casting a fireball spell results in flames that cling to the victims, dealing persistent fire damage to those caught within the fireball spell radius. And spellhearts work as permanent talismans, which can be affixed to weapons or armor to provide permanent benefits.

The last 60 pages of the book is devoted to a wide-ranging exploration of magical systems, called “Book of Unlimited Magic.” These rule systems are less common than the way that magic typically works, representing good hooks for stories where characters are exploring unorthodox forms of magical study, or perhaps where they’re coming into conflict with enemies who view magic fundamentally differently.

Cathartic Magic, for example, is a form of magic that stems from raw emotion, turning magic into an automatic benefit from an emotional trigger. If you select the Cathartic Mage archetype, then you pick a specific emotion, and when that emotion is triggered then it spawns a magical reaction. The storytelling possibilities here could include running into a mentor and/or adversary who utilize this form of magic, and the characters seek to explore it in more depth, having to roleplay their character’s wrestling with the emotional state, either to gain control of this form of magic or to determine how to thwart it.

Another form of magic explored is Elementalism. There are druidic magics tied to the elements, with the introduction of the flame order, stone order, and wave order, along with associated class feats and focus spells. For monks who channel the elements, they can enter monk stances that unlock access to elemental feats, as well, like Reflective Ripple Stance or the Inner Fire feat. This section culminates in different spell lists, specifically designed for the Elementalist archetype, for characters who really want to embrace their connection to one of the natural elements.

There are sections detailing how to apply an archetype allowing for more flexible spell preparation. Systems related to geomancy, ley lines, shadow magic, Thassilonian Rune Magic, using the power of true names, or wellspring magic (which, in another iteration, sounds familiar to what we might have called “wild magic,” complete with “wellspring surges”). Most of these magical systems come along with specific rituals, spells, or even archetypes that tie in to them. For those looking to introduce powerful magical items, sections detailing relic-level soul seeds and becoming bonded to soulforged armaments allow for some potentially powerful and story-driving opportunities. And, if you really want to explore something interesting, you can look into the rules for Pervasive Magic, where magic is so free-flowing that even those who haven’t devoted themselves to the study of it can readily wield its power.

All told, the variability offered by Secrets of Magic really opens up new directions for magic-rich roleplaying opportunities. The book is almost certainly available through your local gaming store (or Paizo directly, as well as Amazon), though if you’ve followed any of the links above you know that you can access the Pathfinder Second Edition rules, including those from Secrets of Magic, through the Archives of Nethys website. To have handy references, there are the Secrets of Magic spell cards (Paizo, Amazon), because the Nethys website isn’t particularly printer-friendly.

Honestly, the first twenty pages of flavor text at the beginning is a lot of fun, and I don’t believe is carried through to the Nethys website, so I do highly recommend the book itself to anyone who’s got any intention of playing any magic-related Pathfinder characters (or running a game with magic users). There are a lot of rule systems in the book, but the nice thing is that they’re all introduced independently, so you only have to introduce the ones that are of interest to you, and can overlook the ones that don’t seem that intriguing. Me, I tend to do both. I’ll throw in kookie secondary characters who are mumbling geomancers, on the off chance that the PCs have an interest in learning more about their type of magic … but then am more than content when they go off instead to explore some other bread crumb that has been dropped, and ignore that the geomancer thread was ever dangled.

Which of these new magical systems seem to hold the most interest for you, as either a player or a gamemaster?