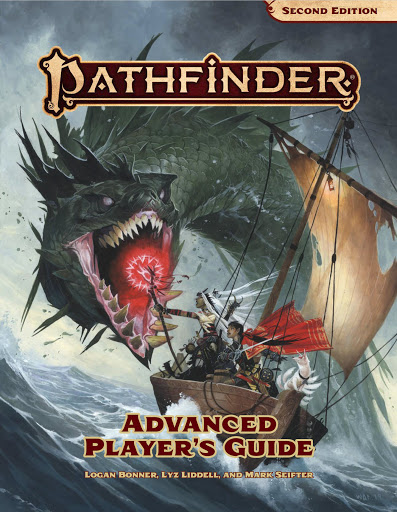 Last year at Gen Con Paizo released their Pathfinder Second Edition. The reception, from those I spoke to, was generally positive. People hadn’t been particularly displeased with Pathfinder First Edition, though after a decade of the game there were some balance issues. When people gave it a chance, many players transition to Second Edition without looking back.

In my experience, people are only thrilled about a new edition of a popular roleplaying game if there are serious issues with the existing edition of the game. For example, the flaws of 4th edition D&D paved the way for widespread enthusiasm when 5th edition was released.

While Second Edition still allowed for extremely diverse character options right out of the gate, it was nothing compared to the options available for First Edition. One major step toward expanding those options is the recent release of the Pathfinder Second Edition Advanced Player’s Guide (Paizo, Amazon) providing new ancestries, backgrounds, archetypes, spells, equipment, and the Second Edition versions of four Pathfinder class options: Investigator, Oracle, Swashbuckler, and Witch.

The ancestries in the Advanced Player’s Guide cover updated versions of uncommon ancestries of Catfolk, Kobolds, Orcs, Ratfolk, and the Tengu ravenfolk. The chapter focusing on ancestries also contains new ancestry feats for the basic core ancestries. These options for core ancestries are mostly common, which can be applied to any character, though some require more specific GM approval since they are uncommon. Any class can also have a new feature called a “versatile heritage,” which allows the character to be a half-breed species, perhaps partially related to vampires, magical hags, or planar scions related to angels, demons, or the neutral psychopomps.

There are common backgrounds, like bandit, pilgrim, and teacher, that can be used for any character, as well as some rare backgrounds that offer a very different playing experience. These rare backgrounds include things like amnesiac and feral child.

The classes are fairly consistent thematically with their previous First Edition versions, although restructured to grow through the Class Feat system used in Second Edition. Of course, the different mechanics of Second Edition mean some core class abilities had to be modifies or removed entirely.

For example, in the First Edition version, the investigator got a pool of “inspiration” that allowed him to roll extra d6’s and add them to certain skill checks or attack rolls. The structure of Second Edition, with generally lower roll targets and the ability to get a critical success by beating your target by 10, means that this would really unbalance things. Instead, the investigator has an ability to use the “Pursue a Lead” action, to maintain up to two active investigations so that the investigator and their allies can receive minor bonuses on rolls related to the investigation target. They can also Devise a Strategem, allowing them to make a roll earlier against a target, so when you make your first attack you already know what the roll will be when you decide what attack to make. Each investigator also chooses a methodology for their character, from the choices of Alchemical Sciences, Empiricism, Forensic Medicine, and Interrogation, granting associated benefits. And, of course, they get to customize the class by selecting class feats available for the investigator.

The archetypes chapter of the book contains the multiclass archetypes needed to multiclass from an existing class into features from these new classes, but then also archetypes like acrobat, beastmaster, or pirate, that provide varied themed options for characters regardless of their base class. Some previous prestige classes, like loremaster and dragon disciple, are also offered through the archetype mechanic.

And the book of course includes more general and skill feats, spells, and equipment, all of which is to be expected. It also contains 13 rituals, which is a type of magic that can be cast if you meet the requirement, and not tied directly to the ability to cast other types of spells. Rituals are introduced in the Core Rulebook, but they’re pretty minimal, and this expansion provide some options that make exploring rituals more interesting, possibly even to the extent of making one want to adopt the ritualist archetype that enhances a character’s ability to perform rituals.

Paizo Publisher Erik Mona goes through a lot of great elements of the Advanced Player’s Guide on the “Paizo 2020 and Beyond” video from the Gen Con 2020 Online feed on YouTube.

If you want to get into Pathfinder Second Edition, they’re having a great Humble Bundle sale, where you can get the Core Rulebook and various other early supplements and adventures for a significant discount, with a portion of the proceeds going to support charities, specifically The National Urban League, The Carl Brandon Society, and the NAACP Legal Defense Fund. This won’t get you the Advanced Player’s Guide, but it’ll be a good starting point for those exploring the Second Edition options.