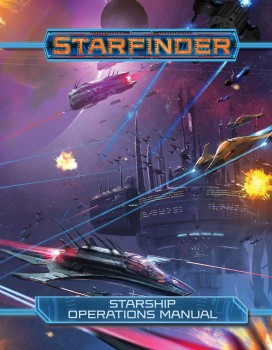 Back in 2017, when Paizo was ramping up for the launch of their new space fantasy RPG Starfinder, we were fortunate enough to offer exclusive previews on two of their new ships months prior to the release of the game. Since the 2017 release of the game, we’ve been keeping a pretty active eye on what Paizo has been releasing and, though there have been some fantastic additions to the game, there hasn’t been a major emphasis on new options for starships. That all changes with the release of the new Starship Operations Manual (Amazon, Paizo), a July 2020 release that was slated to coincide with Gen Con 2020. (Which, you may recall, is happening online this year.)

There have been some previous supplements in the past that dealt with starships. The Starfinder Pact Worlds setting book (Amazon, Paizo) has a chapter with various starships representing groups and societies, like the robotic Aballonian ships, the militant Hellknight ships, and the living ships of the Xenowardens, that weren’t in the original Starfinder Core Rulebook (Amazon, Paizo), and also provided some related new starship options like biomechanical ships, hydroponic bays, and drift shadow projectors that could be incorporated into other ship designs. The recent Near Space setting book (more on that in a minute) also had a chapter in a similar vein, including ships of the aggressive Veskarium. The mechanics of starship combat itself was addressed more deeply in the Character Operations Manual (Amazon, Paizo), released last winter, by creating the Chief Mate and Magic Officer roles to enhance starship combat for characters who were not well supported under the original set of rules.

So is the Starship Operations Manual just more of the same? While it does contain a ton of these sorts of options – starship weapons utilizing 20 new weapon properties, expansion bays, and security systems – it also goes beyond that, introducing fundamental variations to the core starship mechanics. It is worth recapping here that the core design of Starfinder, as a campaign, is that as the group progresses, the ship itself also “levels up” as the players do. The idea is that you’re constantly tweaking the ship and scrounging/bartering for parts and upgrades, and so you get a set number of Build Points as you level up that you can spend to buy new features for your ship. So the ship really gets tailored to the specifications of what the crew wants out of it, both in terms of mechanics and in terms of thematic feel. A group of mercenaries may have an armored battleship, while a group of smugglers might have a sleek and maneuverable transport, while more honest businessmen might be piloting a diplomatic passenger ship. And with the Starship Operations Manual, you really have the ability, as both players and GMs, to make the most out of the starships within the game.

One of the first variations offered up in the Starship Operations Manual are alternatives to the basic long-distance travel that comes from crossing over into the Drift, a trans-dimensional space that forms of the basis of Starfinder travel. Since the Drift isn’t the only trans-dimensional space within the Starfinder universe, it makes sense that there are other types of drives that can exploit those other universes, like the Elemental Engine that can plane-hop through the elemental planes, the Chaos Sails that tap into the violent energy of the Maelstrom dimension, and the First Drive can tap into the wild energy of the First World … but be careful that you don’t end up with a pixie in your engine room! And, needless to say, there’s also a Helldrive.

Among the other equipment you can get for your ship are Electronic Countermeasures Modules (ECMs), which grant new starship combat actions for the Science Officer. Different ECMs provide different benefits, but they grant options like hacking other starships, scrambling their navigation, and even teleporting ships short distances. You can also upgrade existing weapons to gain new features, by applying cost modifiers, so if you like one of the original weapons that your ship has but want to make it a Mystical weapon, so your Mystic character can attack with their magical prowess instead of a traditional gunnery roll, then you just increase the cost by 25%.

Other options available include variant forms of exterior armor, special construction materials, virtual intelligences, supercollosal-scale starships, and the intriguing training integration module (or TIM). TMIs are a diverse set of options that are highly customizable for the specific crew, tailor made for the class features or feats that a character wants to emphasize. For example, a Mystic with the Healing Touch class feature can use the Healing Touch TMI while in the Engineer position to actually heal the starship. Since having an Operative in the Pilot role on a starship is such a cliche, the Trick Attack TMI will likely be a common feature, granting a bonus on gunnery checks after the Pilot rolls particularly well on a stunt roll.

While the first chapter focuses on Building Starships, the second chapter provides in-depth information on starship sombat. This includes rules for boarding enemy vessels (or preventing enemies from boarding your vessel), critical effects for starship combat rolls other than weapon attacks, starship chases, flying in atmospheres, and mass combat options both as squadrons of smaller fighters or a full armada of space navy fleets.

Chapter 3 focuses on Starships with a full 40 pages of new starships. Two ships of each tier from 1 to 20. Also, some good information on balancing starship designs when you spend your Build Points.

Finally, Chapter 4 is really intended for the GM. This chapter on Running Starship Campaigns helps you really manage the game so that the starship combat is integrated well in balance with the tactical elements of the game. One of the biggest problems with the game, in my opinion, is that when you get in starship combat you really are just waiting for it to get over so that you can get back to the “real game.” In particular, since some roles have so much more than others to do in starship combat, this can be a real problem.

The section in this chapter about designing starship encounters will hopefully help with that, along with the diverse options of NPC starships available in this and other books, meaning that players can’t just take for granted what the ship they encounter will be able to do. There are also rules for creating unique starship-sized creatures and incorporating space hazards. And then, from a more narrative perspective, there are adventure seeds and campaign arc tips on how to keep starships a relevant part of the adventure.

And, of course, if your Starfinder crew has a decked out starship, they’re going to want to go somewhere … and that’s where the Near Space setting book (Amazon, Paizo) comes in. (See, I promised I’d get back to that.) The major setting information is about the Veskarium, the home of the aggressive lizardlike Vesk species, which is one of the core alien races playable from the Starfinder Core Rulebook … shown here on the Near Space book cover, being aggressive and lizardlike. 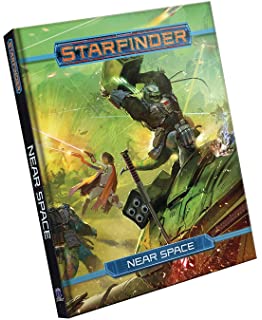 The Veskarium is also home to the adorable skittermanders, the labradoodle of the Starfinder universe. They are less lizardlike, looking more like a cross between Disney’s Snitch and Gizmo from Gremlins.

Outside of the Veskarium, the Near Space region contains a number of other interesting planets, cultures, and conflicts for players to run afoul of. The nice thing about the design of the game is that you can combine these elements with your own world fairly easily. Perhaps you want to play at a spacestation that is near a somewhat oppressive, but not necessarily evil, empire that has a lot of political intrigue … well, then the Gideron Authority might be for you. Maybe swing on over to Daimalko to fight a few kaiju-like creatures. Even if you aren’t planning to run a campaign in Near Space, it does have a lot of useful character options available, which can be incorporated in characters who adventure in other regions.

A nice way to generate maps quickly for Starfinder games is with their newly-released Space Station Starter Set (Amazon, Paizo) from the Starfinder Flip-Tile line. I have this Starter Set, and also the Forest Starter Set for Pathfinder, and they’re pretty nice tiles. Printed on both sides, they can flip around to connect together to create a variety of great map layouts. The boxes are also arranged with extra space and divider cards so that if you buy expansions down the line – and there are, after all, always expansions down the line – they go in there and can be kept nicely organized. If looking for something more planet-bound, there is also the City Starter Set (Amazon, Paizo), due out in September.

WizKids is also about to come out with a Starfinder Battles line of miniatures, starting with two sets, Galactic Heroes and Galactic Villains. Both were slated for a release in late July, but as of the time of this writing they are still not showing up as available on Amazon, so I assume they haven’t yet made it out into the wild. Probably something about a global pandemic slowing down shipments and supply chains or something. I swear, there’s always some excuse, isn’t there?

And, finally, one last bit of Starfinder news … Another playtest! They’re testing out two things for next year’s Tech Revolution supplement: the nanocyte class and a new battle mech combat system. You can get the details on the Paizo blog or jump straight to the playtest website, and if you play in Organized Play the folks at Paizo have also allowed you to create and play legal nanocyte characters at levels 1, 4, and 8 to test them out, applying chronicle sheets to one of your own characters as if you were a pregenerated character. The playtest runs from now to September 18, when they’ll want all survey data turned in with feedback on the new play options.

If you’re intrigued, there may still be an option to check out Starfinder games at Gen Con Online, which starts on Thursday. I honestly don’t know if there are any Starfinder Society organized play games left with openings, but in my experience it’s fairly common for people to drop out of games at these virtual conventions, so if you’re looking to play this weekend it would be worth still looking into it, even if the games you’re interested in look like they’re sold out.