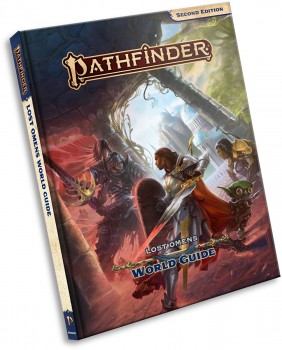 With the release of Pathfinder Second Edition at GenCon in August, Paizo set out to once again re-capture fire in a bottle. They’d done it once before, a decade ago, when they took the ruleset of Dungeons & Dragons 3.5e, slapped it together with a ton of house rule modifications and other changes, and then rebranded it as the Pathfinder RPG. Here they were taking that very same Pathfinder RPG, which had itself grown wildly successful, and trying to create a new and compelling variant of that.

Having played a handful of the Pathfinder Second Edition games now, I’m finding quite a lot to like about it the system. But one of the things that drew me so powerfully to Pathfinder First Edition was when I got my hands on the Inner Sea World Guide. While the rules were great, the dynamic nature of the setting, with the rich diversity of nations and storytelling options, was what really engrossed me.

And clearly I’m not alone, because one of the first releases that Paizo planned to follow-up the release of Pathfinder Second Edition was the Lost Omens World Guide (Paizo, Amazon). The default setting for Pathfinder (both editions) is the Age of Lost Omens on the world of Golarian, and thus the name of the guide. This re-introduces the core of the Pathfinder setting, while at the same time introducing a quick infusion of new character creation and advancement options to supplement the basic rules.

The basic structure of the guide is ten chapters, each detailing a major region within the Inner Sea portion of Golarian. Within each chapter, there are several pages describing the major nations and cities within the region, followed by a page full of backgrounds focused on the regions, and then a region-specific archetype.

In Pathfinder Second Edition, a background is picked up at character creation, basically representing the basic training or profession that the character was versed in before they set on the adventuring lifestyle. The background modifies which abilities are increased during character creation, provides training in a couple of skills, including at least one of the Lore skills, and also provides a designated skill feat. So if your group has a Fighter with the Barkeep background (from Core Rulebook) and a Fighter with the Undersea Enthusiast background (from the High Seas region in the World Guide), they’ll have some very different abilities starting out at first level, even before they begin deciding on their first level Fighter class feat.

Archetypes are introduced in the Pathfinder Second Edition Core Rulebook, but the only ones presented are multiclass archetypes. If you’re playing a Bard but want to multiclass as a Rogue, you pick up the Rogue dedication feat (which you can get as early as second level) in place of a Bard class feat, and that begins giving you the ability to gain some Rogue features through taking additional Rogue archetype feats in place of your Bard class feats.

With the World Guide, we get our first look at other archetypes, which are more similar to the former prestige classes and more uniquely based on Golarian organizations or mythology. The archetypes presented in this book are tied to specific regions, so they generally require that the character be from the specific region in order to gain the archetype dedication feat.

So, for example, let’s say that you’re a Champion whose backstory is that you have pledged yourself to fight against the rise of the Whispering Tyrant. You create a first level Champion character. At second level, being from the Eye of Dread region, you decide to begin taking the Lastwall Sentry archetype. Instead of taking a Champion class feat at level 2, you instead take the Lastwall Sentry Dedication, which trains you in Athletics and Undead Lore (making you expert if you’re already trained) and also giving you the Reactive Shield feat. As you advance, you would have to choose between gaining feats from the Champion class or from the Lastwall Sentry archetype, such as Necromantic Resistance. 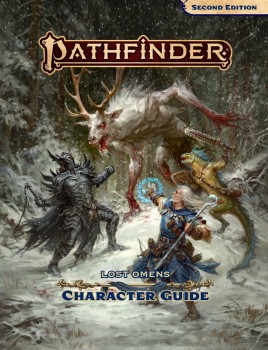 Ultimately, though, the bulk of the World Guide is devoted to giving Dungeon Masters substantial setting material to delve into the world of Golarion. Knowing that players of Pathfinder want (with the hunger of an addict) even more character options, they also released the Lost Omens Character Guide (Paizo, Amazon). The central compelling feature of this book is the addition of three ancestries (along with heritages and ancestry feats) for three new playable races: hobgoblin, leshy, and lizardfolk.

While most fantasy gamers are probably aware of the hobgoblin and lizardfolk, leshy is a player ancestry of small plant-based people, and the options include heritages of leaf, fungus, gourd, and vine-based variants. Their ancestry abilities include things like getting seedpod ranged attacks, innate magical spells, being so cute that they can manipulate others, or healing from resting in the sunlight.

In addition to the new uncommon ancestries presented in the Character Guide, the common races from the Core Rulebook get some more options as well. These ancestries have sections describing different ethnicities, and then also heritages to choose from, like the Ancient Elf, Tailed Goblin, or Observant Halfling. The book also touches briefly on some other ancestries that can be found across Golarion, though the ability to use these as player options will have to wait for the Player Guide, slated for a GenCon 2020 release.

A substantial portion of the book is devoted to some of the key organizations of Golarion, including the freedom-loving Firebrands, the order-embracing Hellknights, the undead-slaying Knights of Lastwall, the mystical scholars of Magaambya, or the explorers of the Pathfinder Society. These organizations all include a comprehensive statblock of their goals, as well as descriptions to help better understand them. Player options ranging from equipment to feats to archetypes are included in each organization’s chapter. In some cases, these archetypes and feats have a synergy with the archetypes presented in the World Guide.

The final sections of the book provide a gallery of NPCs to incorporate into your adventures. One nice feature are “theme templates,” which a Dungeon Master can apply to an existing creature’s statblock to make creatures and NPCs who are affiliated with the various organizations described in the book.

Whether running adventures in worlds of their own creation, playing their own Golarion adventures, or running one of the pre-written adventure like the module Fall of Plaguestone (Paizo, Amazon) or the Age of Ashes adventure path (Paizo, Amazon), these supplements provide a ton of material for players and Dungeon Masters alike to expand their Second Edition options.

Still not enough? Well, the next big supplement is due out in January 2020, with Lost Omens: Gods & Magic (Paizo, Amazon).

One last bit of news for those who have already started playing the game: The staff at Paizo have also been carefully combing the feedback on Pathfinder Second Edition, resulting in the first errata document for the game. And if you haven’t started playing, but are interested in looking it over, the full set of rules are available at the Archives of Nethys website.