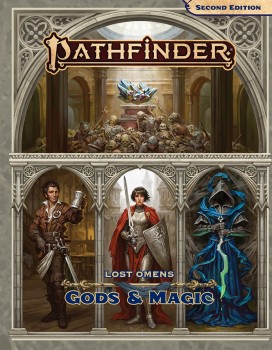 Since GenCon 2019, there have been a number of great resources and supplements coming from Paizo to support their Pathfinder Second Edition roleplaying game. Last November, I covered the first two setting supplements, the Lost Omens Character Guide and Lost Omens World Guide. Players and Gamemasters alike have a slew of options available already, with even more slated to come by the end of the summer.

For those who don’t have time to plan or create adventures from scratch, they have one full Adventure Path, Age of Ashes, released, with the second, Extinction Curse, releasing its final volume in the next month. Each 6-volume Adventure Path for Pathfinder Second Edition takes players from level 1 through level 20, creating a truly epic campaign. Age of Ashes (Paizo, Amazon) involves the heroes discovering the secrets of an abandoned Hellknight fortress and its connection to an ancient evil force. Extinction Curse (Paizo, Amazon) is a circus-themed adventure, where the heroes must save the show while also investigating a plot to unleash an ancient curse, with a volume entitled Siege of the Dinosaurs. The upcoming Agents of Edgewatch (Paizo) is a fantasy cop adventure, as the heroes take on the role of law enforcement officers in and around the city of Absalom.

In addition, Paizo also releases a steady stream of smaller adventure scenarios to support the extensive Pathfinder Society Organized Play organization. Those adventures, available exclusively on PDF through Paizo.com, run about 4 hours per scenario, and players who play through them gain chronicle sheets that determine the amount of XP gained, as well as Fame & Reputation with various in-game factions, and of course gold and treasure. Characters also gain a variety of boons from these chronicle sheets, providing unique in-game benefits based on the previous adventures that they have completed. The structure of Pathfinder Society means that players can take the same character across a series of adventures at local game stores and conventions, and have the feel of being part of a larger adventure campaign.

Of course, that all assumes that game stores are open and conventions are taking place … but Paizo and gamers have stepped up to make sure there are opportunities to play, even in the midst of the dreaded “new normal.”

With the global pandemic going on and all, getting together with people in confined gaming shops is hard to justify as an essential activity, even if it might feel like one. And, much as I love the hobby, the game store and convention scene has also never been a place where I would say handwashing has been a high priority. My gaming fix during lockdown has largely been helped by having a captive family to play with. My two kids, long-suffering wife, and I have played through the Fall of Plaguestone (Paizo, Amazon) module for levels 1-3 and then have begun the Age of Ashes Adventure Path, despite my desperate efforts to convince them that playing circus performers would be way more fun than fighting dragons.

But I’ve also tried out some online playing options. Paizo.com has an active Play-by-Post community, and the online Play-by-Post convention Outpost III started shortly before lockdown commenced. These are mostly Pathfinder and Starfinder Society games, where you play through the game with text posts detailing your character’s actions, and responses to the events described by the GM of the game. I did a fair amount of online text gaming – in the form of MUDs, MUSHes, and MUXes – throughout my college years, so this format is fairly easy for me to slip into. The asynchronous nature of the posting is interesting, but I can also take part in multiple games with only a few minutes here or there throughout the day to devote to it.

For larger blocks of time, the virtual tabletop platforms, like Roll20.net and Fantasy Grounds, have proven extemely useful. When GaryCon was cancelled, toward the start of the lockdown period, they switched quickly over to online games, and I was able to get a couple of games in during that virtual convention. I followed that up with three games at Virtual Koboldcon. And the week after Memorial Day is Virtual PaizoCon, which is still open for sign-ups. There are a slew of Starfinder Society and Pathfinder Society games available to play during the 6-day convention, from Tuesday, May 26 through Sunday, May 31, for those who are wanting to dip their toes into the Organized Play.

If you’re looking for more information on how Organized Play functions, check out the online Pathfinder Society Guide to Play. Don’t own the books? Fortunately, the full basic ruleset is available through Archives of Nethys, through permission from Paizo. If Starfinder is more your thing, then the online guide can be downloaded here and Starfinder rules are also available.

And if you’re going to PaizoCon, by all means, reach out and let me know, and I’ll be happy to offer some more in-depth tips to questions you may have.

Whether you’re playing Pathfinder Second Edition online or among close friends and family that you’re allowing into your bubble, with adventures you create or with pre-generated adventures, there are a number of resources available to help customize your experience to the level you desire.

Lost Omens: Gods & Magic (Paizo, Amazon) is a setting book for the deities of the core Lost Omens campaign setting. In addition to the descriptions of the deities throughout this book, as well as philosophies and pantheons that can be worshiped, there are additional character options for players to benefit from based on their religious traditions. If you’re going to be playing a storyline that is set within the world of Golarion, or use the deities related to that world, this is really a must-have book. If you’re going to create your own adventures, the religious systems and descriptions might be useful as examples for creating your own god-related feats, spells, philosophies, or pantheons, but it wouldn’t be essential.

Pathfinder Gamemastery Guide (Paizo, Amazon) is a great resource for Gamemasters, particularly those who are looking to create their own adventures from scratch. Paizo covered a lot of great features from his book through videos released on YouTube back in February and March, including this one about the rule options for running an infiltration scenario (as well as the randomized options of the fantastic Chase Card Deck). There is really no way to do justice to the amount of material in this volume as part of one overall article, and I’ll need to dive into it in depth in its own post. The book includes NPCs, variant progression options to apply, as well as rules for building or modifying campaigns, worlds, monsters … pretty much everything you would need to adapt and customize the basic rules of Pathfinder to suit your own campaign needs. The infiltration video, for example, depicts use of a victory point subsystem, which is an sort of general subsystem that can be used for anything not explicitly covered, and it is included in the book along with explicit subsystems for influence, reputation, research, and other useful mechanics. 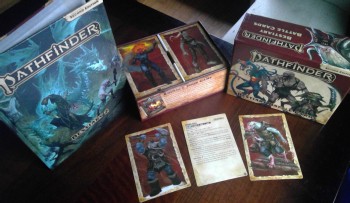 Bestiary Battle Cards (Paizo, Amazon) are available, featuring artwork and statistics for all of the characters from the initial Pathfinder Bestiary (Paizo, Amazon). This is an impressive box, with large cards that have great artwork for every creature … even those that weren’t depicted within the Bestiary itself. I think the key is to pull out the cards you need beforehand, so you’re taking a manageable stack with you to the game. I used this strategy for my first Age of Ashes game, by flipping through the large stack of cards and pulling out the dozen-or-so that were encountered in Parts 1 and 2 of the first book. This allowed me to easily show the players what they were encountering, while I looked at the statistics on the back, and since I had a small stack I didn’t have to dig through the whole box. The product would be slightly better if it had provided alphabetical dividers, but beggers can’t be choosers. They are in alphabetical order, but it’s still a lot of cards to dig through. And sometimes the naming isn’t the most intuitive. When looking up a Fire Mephit, for example, you have to look under “Elemental, Fire Mephit.” But having the cards handy for the monsters was a major advantage to flipping through the book, so is definitely worth consideration. And, if you just love having accurate images to move around on your map, the Bestiary Pawn Box (Paizo, Amazon) is also an option.

Bestiary 2 (Paizo, Amazon) is also out, for anyone who felt like a single Bestiary wasn’t giving sufficient material for their players to fight. This provides another 350 creatures (to supplement the 400 in the original volume). The one big change in Pathfinder Second Edition is that ancestries require a little more bulk to flesh out, so they’re not easy to provide in a simple sidebar, as was often the case in First Edition. The consequence is that you can’t play these creatures … for that, you’ll have to wait for the Advanced Player’s Guide, slated for release in July. 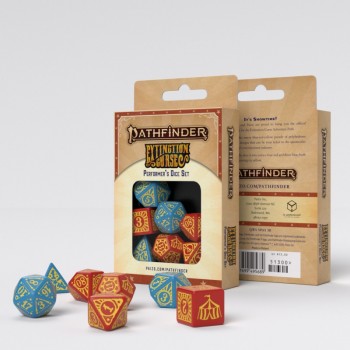 Among other accessories worth mentioning are customized sets of Pathfinder dice from Q Workshop. The newest sets released are custom dice sets for the Extinction Curse campaign. I may have mentioned that this is a circus-themed campaign, and the dice represent this by having a “Big Top” icon on the highest value of the die (except for the D4, that is). I normally am not a fan of overly-artistic dice. I want simple, high-contrast dice where it is easy to read the numbers, even in poor lighting. These Q Workshop dice, despite having artistic detail, are very easy to read in a variety of lighting. They also have a clever marketing move here, by releasing two alternating mixed blue and red sets of dice. If you buy both the Entertainer’s Set and the Performer’s Set, you end up with a complete set of blue dice and a complete set of red dice. These gaming companies certainly know how to market to the compulsive nature of the gaming community!

The future slate of upcoming releases includes a number of other promising titles, slated for release in July 2020:

Pathfinder has always been a game that’s been noted for having a wide array of options available. With Second Edition, they have really moved forward to allowing for even deeper levels of customization, and the growing number of supplements are giving making for ever-widening options for play. Those options are a bit more limited when playing within the Pathfinder Society, at least for now, but as the game progresses, it is clear that more of the ancestries will be allowed for Society play. But between the campaigns and adventures, the player options, the gamemaster supplements, and the variety of accessories, there’s no shortage of ways to get engaged with Pathfinder Second Edition … either online or in person.

Author’s Note: Just as I was finalizing this post, GenCon 2020 was cancelled for August. They will be putting on a GenCon Online convention during that timeframe, though, and much of the information in this article about online play and virtual tabletop platforms might be of interest to those considering playing at GenCon Online, as well. I am sure that there will be ample Pathfinder and Starfinder opportunities at GenCon Online. Also, be aware that registration for the mid-June Origins Online convention begins tomorrow (Wednesday, May 20). We will provide more information about these conventions as they approach.