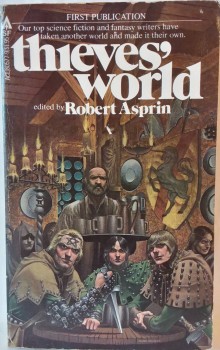 In all fairness, to some Hanse might not sound like much of a hero. A swaggering thief isn’t everyone’s cup of tea, and that I understand. Still, all these years later, why is he a favorite of mine? I’ve read millions upon millions of words of fiction in my life, much of it fantasy literature, but Hanse remains my favorite fantasy character, my favorite fantasy hero.

Part of it might be that I discovered him at such an early age, an age in which I was somewhat enthralled with scoundrels (Han Solo comes to mind) and in which I loved a good quip from the good guy (Spider-Man comes to mind). Shadowspawn supplied many of these characteristics, plus he was actually a pretty nice fellow when it all got said and done.

I’m sure Hanse was inspired by that earlier thief, the Gray Mouser who was created by Fritz Leiber, but I’m also positive Hanse has inspired many another fantasy character since his introduction, even if some writers are not aware of such.

In the last forty-plus years since Hanse Shadowspawn first appeared, I’ve read of many other fantasy heroes, but he is still my favorite. Even before reading of Hanse, I’d read of Frodo and Bilbo and the like, but none of them struck my love of character as much as Shadowspawn, and few have since. And I’d be a fool not to admit that Hanse hasn’t influenced my own writings.

I salute your choice of Hanse Shadowspawn, who has more than earned his place among the heroes of S&S. I’m not sure if I have a favorite, but if I had to choose, it might be REH’s dark paladin: Solomon Kane.

Ooooo, Solomon Kane is a good one.

Does Khlit the Cossack count…?

I think this is a bit like asking who your favourite Rock and Roll star is: the first handful to articulate the form own it for all time – Chuck Berry, Elvis or Jerry Lee Lewis?

MH Page speaks truly, narrowing it to a single favorite is nigh impossible, even unfair. However, I will say if the speed to need to read a new story is indication of favoritism, Steve Goble’s Calthus ranks quite highly for myself.

I would say that Harold Lamb’s Khlit the Cossack DOES indeed count. Excellent choice.

I’m late to the part on this one.

Does Enge’s Morlock the Maker count? I know he gets billed as S&S a lot and love so many of the stories. (If you read this James we need more collections of already published work)

But if Morlock doesn’t pass I’d have to go with Kull.

I think it has something to do with me only reading Kull because i found a cheap version of the Del Rey. I was expecting just a less polished Conan copy. To some extent thats what he is. But the handful of stories add up to more.

Even the shorter tales like “The Striking of the Gong” have stuck with me years after i read it. And i prefer “By This Ax, I Rule” to “Phoenix on the Sword”

Hanse is my favorite thief in all of fantasy. Many a gold box/Baldur’s Gate/Neverwinter Nights character was named Shadowspawn.

I wasn’t happy with Lynn Abbey’s total destruction of Thieves World in her new TW stories. But I was pleased she didn’t feel the need to tear him down as well.

I can see Shadowspawn (love) and Shadow of Sorcery (not so much) over on the shelves.

Poul Anderson’s Cappen Vera was the other character that captivated me, but he moved out of the center of things relatively quickly.

Favorite S&S characters are, for the most part, not too obscure: Leiber and Fischer’s Fafhrd and the Mouser, Jack Vance’s Cugel (if science-fantasy anti-heroes work), Karl Edward Wagner’s Kane, and Janet Fox’s Arcana (though that name sounds vaguely wrong to me). Another outlier would be Phyllis Eisenstein’s Alaric. And even more so, Avram Davidson’s Dr. Eszterhazy.