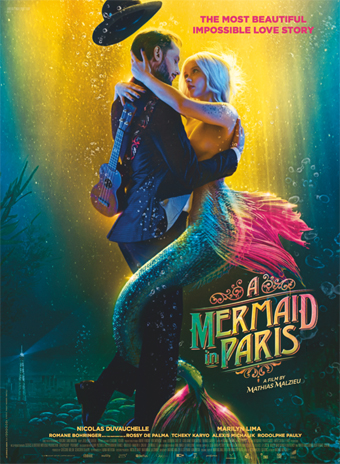 Back in my 2014, my first year covering the Fantasia Festival for Black Gate, I reviewed an animated movie called Jack and the Cuckoo-Clock Heart, the debut film from director Mathias Malzieu. The songwriter and lead singer of French pop band Dionysos, Malzieu’s also a writer; Jack was also a concept album and novel as well as a film. Now Malzieu’s got a new movie, filled with singing and dancing and whimsy. A Mermaid In Paris (Une sirène à Paris) has many of the same visual influences as Jack, but moves beyond them in a new way. Although it has a happier ending, it also has a truer feel for melancholy and grief, and with that a sense of greater depth.

We follow Gaspard (Nicolas Duvauchelle), a singer at a bar owned by his father Camille (Tchéky Karyo) who is thinking about selling the magical place, located on a boat, hidden under a café. One night, Paris is flooded, and Gaspard finds a beautiful mermaid (Marilyn Lima) washed up on the cobbles. He takes her to a hospital where, unknown to him, she gains strength by draining the life of a doctor, Victor (Alexis Michalik), with her song. Unable to get the staff to give her treatment, Gaspard takes her home, not knowing that Victor’s wife Milena (Romane Bohringer) has sworn to find her husband’s killer. Will Lula, the mermaid, kill Gaspard? Will Gaspard, who believes he cannot love a woman after a failed relationship in his past, be drawn to her nevertheless? If so, will Lula survive, who must be returned to her native element?

Such the questions of the film. We get fine answers, though the plot that provides them is a bit ragged, here and there. Specifically, Milena is a little underplayed. Nominally the villain, she doesn’t do that much over the course of the movie, and creates little sense of tension or threat. In a way, that’s a testament to how much Bohringer brings to the part; it’s impossible not to feel for her, and Malzieu’s direction and visual imagination makes her love for Victor a powerful counterpart to the development of Gaspard and Lula’s love.

It’s also true that the basic tone of the movie is one of romance, not logic. Reality is heightened, the visual world of the film shaped by emotion, primarily love. This is the Paris of fairy-tales and dreams: colour is rich, music is everywhere, the people are whimsical and lightly ironic. Where Malzieu’s first film was strongly influenced by Tim Burton, this one marries the Burton feel to Jean-Pierre Jeunet, specifically the Jeunet of Le Fabuleux Destin d’Amélie Poulain. It is the kind of city into which a mermaid might wash up, and if the people of the film show less surprise at a mermaid than you might expect, that’s probably why. 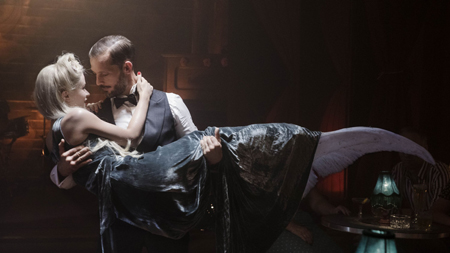 Beyond the feel of the city, Malzieu creates a world of pop-culture ephemera that might have been: elaborate pop-up books, a record-recording booth, a birthday piñata made of glitter. In particular, he creates a distinctive secret society dedicated to creativity and art — an anti-fascist Resistance built of the dreamer’s spirit — and develops its a backstory and fuses it to the life of his characters. Again, this is exactly the kind of world into which a mermaid might swim: a world in which the mermaid’s clearly more than natural, but in which there are equally fascinating aspects to purely human society.

Ultimately, for all its visual élan, the film works because the love story at its centre works. Marilyn Lima strikes the right notes as Lula, literally and figuratively, establishing her both as an inhuman belle mer-dame sans merci and also as a drifting young person trying to work through the death of her mother. Nicolas Duvauchelle is charismatic enough to make Gaspard work as a performer; he also has a dancer’s moves, a knack for physical comedy and physical acting. He’s helped by the fact that we get to see Gaspard from the outside, through other people’s eyes — particularly that of his neighbour, Rossy (Rossy de Palma). Gaspard’s set into his world, but his world’s bigger than him and does not revolve around him. 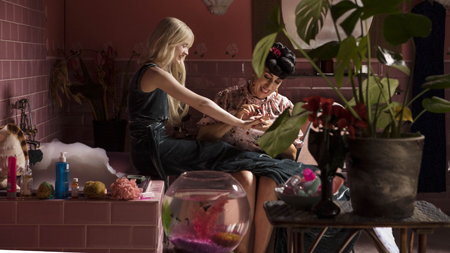 Malzieu builds Gaspard and Lula’s relationship through impressionistic set-pieces. That’d be unlikely to work in the case of two human beings, but in the case of a mermaid it feels like the only way to present a growing love — impressionistically, symbolically, theatrically. Malzieu’s got a strong sense of pace; perhaps it’s a musician’s sense of rhythm, but the film moves dynamically. Not formally a musical, though it has songs in it, it has a musical’s controlled speed, moving us adroitly through the story before doubts and objections can raise their heads.

This is not a high-budget extravaganza, but it makes full use of the resources it has. We do not travel all over Paris, except for a couple sequences based around quick motion through city streets, but do explore magical locales embedded within the urban framework of a slightly-surreal City of Lights. The point I want to make is that the scale of the film works well with its story. We have just enough settings, and no more. Just enough characters, and no more. There is a theatrical sense to the scale of the story, with a small set of principals, with a few recurring settings. That tracks with Gaspard’s sensibility and the playlets he stages for Lula. 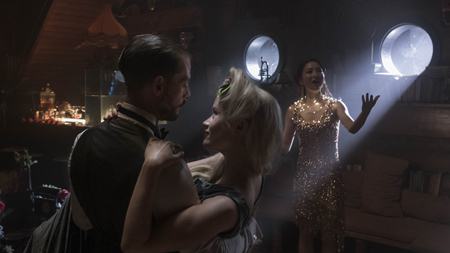 And it works with the overall sense of the movie, which is nothing if not theatrical. It’s ultimately convincing because there’s a sense of an offstage world also present. We are watching a fairy-tale, but there are shadows in this tale, pointing to old sorrows. Gaspard begins the story an emotionally broken man; beyond the love story with Lula, he is relearning how to love, healing from a deep wound. The movie has a soulfulness, a kind of respect for that pain and for the pain of its nominal villain Milena, that gives it a sense of depth beyond what is most obvious on the screen.

None of which takes away from the fact that A Mermaid In Paris is a fun, joyful movie. It should be fine viewing for all ages, very young to very old (parents’ advisory: there is mermaid toplessness and a non-explicit view of a man in a shower seen from above; and there are those moments of sadness). Certainly it’s worth the watch for anyone seeking a fairy tale, especially a happier tale than mermaids usually receive, and especially one that catches at the magic of one of the great fairy-tale cities.