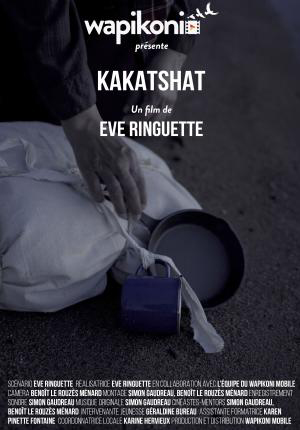 Wapikoni Mobile is a non-profit organisation based in Montreal that sends mobile film studios to work with the youth of Indigenous communities, teaching them the skills to make movies and giving them the support to produce short films. Almost 200 Wapikoni shorts have won awards or special mentions in film festivals around the world, and many have appeared in previous editions of Fantasia. With the studios on hiatus due to the pandemic, this year the festival screened a collection of 17 movies selected by Wapikoni in a showcase of work created through the program.

I watched the showcase, and was impressed. Every movie had something to recommend it, and most of them had quite a lot. (Unfortunately, I’ve been unable to find acting credits for most of the films; but as least I’ve been able to include links to some.)

The first of the films was one of the best, and possibly the most haunting film I saw at the festival all year. The 8-minute “Kakatshat,” by Eve Ringuette, starts in the 19th century with a curse from an abandoned old woman (played, I believe, by Thérèse Vollant), then moves forward to show the curse’s working-out. It’s stunningly well-shot, and, quiet and eerie, captures a profound atmosphere.

Next came “The Guest,” by Nicholas Rodgers. It’s a folkloric five-minute-long story about a man (Philippe Mathon) who takes a small omnivorous furry creature into his house only to find it has more of an appetite than he realised. It’s made in a distinctive kind of stop-motion that gives it a surreal touch; you can see it here. The next movie was also from Rogers, “RUN,” in which a man who’s committed a violent crime treks into a nighttime forest and finds there more than he expected. It’s a solid piece of horror that does some very nice work with soundscapes, and it’s available here.

Next came “Among The Forest,” by Oqim Nicholas. A youth journeys into the woods, pondering a horrible life left behind, and his internal monologue builds to a powerful ending. The writing gives us some particularly nice character work. “TRANSMISSION 01: 34-OD” by Jim Matlock is an experimental video that uses distorted sound and images to fashion a plea for change in the world, creating nice collage effects along the way. 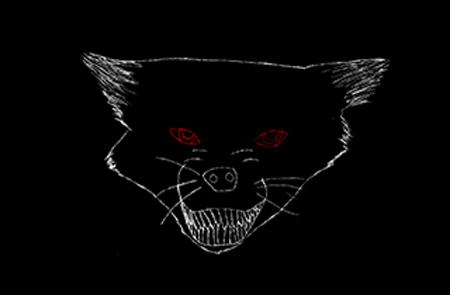 “L’origine du capteur de rêve” (“The Origin of the Dreamcatcher”) by Cassandra Ambroise-St-Onge and Donavan Vollant, from a script by Vollant, is a lovely animated myth. White lines scratched on a black background bring out the undercurrent of horror, and the story moves well, balancing the individual’s story with what he brings to his community. “Night Stalk,” written and directed by Robert Gilpin, is a fun piece of low-budget genre fare, a suspense film about two investigators tracking down a suspect in an large institutiona building. You can see it here. “J’ai joué à Dieu (I Played God),” by Tania Jourdain follows a proud and ambitious young woman who plans to make a living creature to get revenge on those who mock her. A take on the Frankenstein tale that gains from the specificity and occult feel of its imagery, you can watch it here (in French).

Martin King’s “God’s Park” was an especially strong story, told mostly in voice-over above images of a park. A homeless man describes living in the park until he becomes literally a part of it — only to see a young woman drift into the park, apparently playing out a familiar cycle of despair. It’s touching, and very cleverly told, a powerful reflection on landscape and identity.

“Malsem,” by Jesse Martin, is a fun and energetic five-minute exercise in found-footage horror, in which a group of young friends fall afoul of a creature of myth. It’s available here. Jim Matlock’s “Rat sale” (“Dirty Rat”) is another experimental piece from Matlock, depicting a person in a half-collapsed house suffering a breakdown of negative emotions. A distorted electronic soundtrack adds a strong sense of rage to the overall effect of the film. Raymond Caplin’s “Missing Offering” is a fully-animated story about a young hunter who forgets to leave an offering after trapping a beaver; it’s briefer than the other films, at a hair over two minutes, but nature’s revenge makes for an effective cautionary tale. 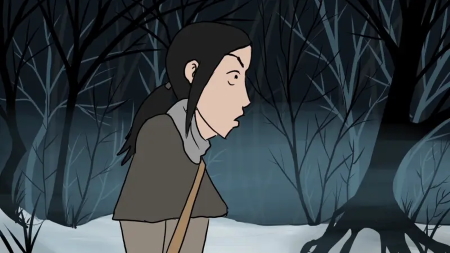 “Respect Your Elders, Chum!” by Jack Belhumeur tells the story of a young man named Chum and his family. Chum steals his grandfather’s medication to resell it, which does not go well. He has to make a choice, and the story of his decision works because of the strength of the visual storytelling, the sense of realism of the setting, and the quiet effectiveness of the ending. You can watch it here.

Gloria Morgan wrote, directed, and starred in “Coyote’s Canoe.” It’s a story of the mythic trickster, this time in the role of a kind of culture hero, bringing salmon to the people inland. A voice-over accompanies Coyote’s journey up a river, and we see with him the gorgeous landscapes far from the ocean’s shore. Jim Matlock’s “After Hell” is a strong change of pace, a more humanistic if not more accessible piece than his other two in this collection. It’s the story of someone pushed right to the edge; it’s convincing, and so powerful that the ending comes as a positive relief. You can find it here.

Jacqueline Michel’s “Mahiganiec” (“Baby Wolf”) is the story of a feral girl that puts its focus on what happens after many feral-child stories end. An Algonquin legend, it opens with the beginning of the tale being told from an elder to a child, and tells its story of good intentions and miscommunication with excellent framing of its visuals and strong editing choices. It’s a story about the encounter of humanity and nature, perhaps within a person as much as without. And it’s available here. 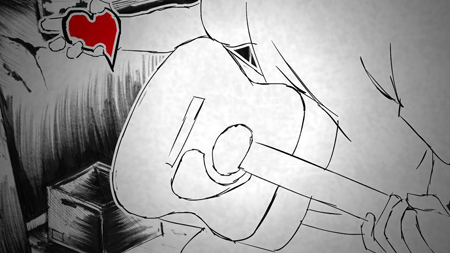 Finally came “In Your Heart,” by Robert Caplin. It’s a wordless parable about a guitar player working with his instrument. It’s animated, and looks wonderful, hand-drawn lines against a realistic black-and-white background, thick ink shadows providing dynamism. A reverie sequence of live-action montage sets up the guitarist’s application to his music, and gives a weight to the story — showing what internal obstacles the musician faces, and what the struggle to realise his music costs him. It was an excellent way to finish the showcase, speaking as it does about creation and the power of art, and I recommend watching it — which you can do here.