I was minding my own business at Barnes and Noble last week, picking up random books and opening them to the Acknowledgements page, as one does. And what should I find in Hank Davis and Christopher Ruocchio’s new Cosmic Corsairs anthology?

For help and advice, many thanks to John O’Neil and his Black Gate webzine, R.K. Robinson, Jason McGregor, Chris Willrich, Rich Horton, Marie Bilodeau, and others I’m unforgivably forgetting.

I was very touched. Yeah, they misspelled my name slightly, but I wasn’t the source of good advice anyway. As Hank and Chris note, it was really you, the readers of Black Gate, who chipped in with great suggestions when we sent out a call for suggestions here last year:

I know what you’re thinking… ‘Arrgh, me hearties! This looks like a fine volume ‘o pirate tales! But how many of our suggestions did the the editors actually use?’ (Come on, you know that was close.) Here’s the final table of contents. 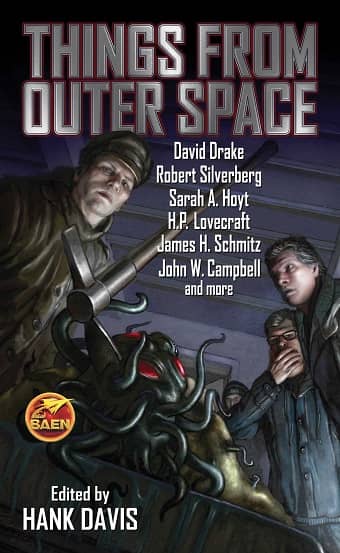 Hank Davis has been keeping classic science fiction alive in paperback on store shelves for years, and recently he’s been joined in this noble endeavor by Christopher Ruocchio. If you’re a fan of short genre fiction, you have a lot to be thankful to them both for, including:

Cosmic Corsairs was published by Baen Books on August 4, 2020. It is 321 pages, priced at $16 in trade paperback and $8.99 in digital formats. The cover is by Tom Kidd. Read a generous excerpt, including the introductions and the first story, at the Baen website.

It must feel good to find these occasionally. Much deserved.

I’m a third of the way in and must admit In my zeal to start reading, I skipped The Acknowledgments. So what a nice surprise to find myself among the more worthies listed.

You don’t know, and Hank probably doesn’t either, that he and I were in a mystery fiction APA together – I as Richard Robinson – DAPA-Em. We exchanged some emails at the time, a a few paperbacks were discussed, and authors. My suggestion for the book, The Pirates of Ersatz, was a novella, and too long.2zl8

> It must feel good to find these occasionally.

It does indeed, James. Black Gate is a community of writers and readers that’s been around for two decades now. But I’m still constantly touched and honored by the writers who express their gratitude for what we’ve done in print.

> So what a nice surprise to find myself among the more worthies listed.

> You don’t know, and Hank probably doesn’t either, that he and I were
> in a mystery fiction APA together – I as Richard Robinson – DAPA-Em.

Small world! I’m in (sporadic) contact with Hank by email, and I think that’s something he’d like to know. I’ll mention it in my next note (and drop me a message at john @ blackgate.com, and I’ll send you his address.)

> My suggestion for the book, The Pirates of Ersatz, was a novella, and too long

True… but I get the sense Hank appreciated it anyway. 🙂

[…] Thank You — Yes You — For Helping Fill Hank Davis and Christopher Ruocchio’s Cosmic Corsairs. Black Gate informs me that I’m famous. Shucks, t’weren’t nothing. (Really. But I tried.) It sure made my day, though. ? […]