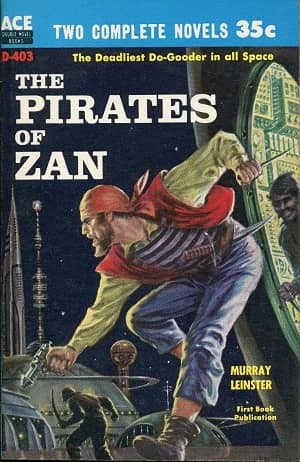 It always pays to check in early and often with Hank Davis, the mad genius editor at Baen Books behind The Baen Big Book of Monsters and The Best of Gordon R. Dickson, Volume 1. Here’s what he told me last month.

I was dorking around online, looking for stories and story ideas, and came across one of your Black Gate pages from way back in 2013, singing the praises of Leinster’s The Pirates of Ersatz/The Pirates of Zan, and bemoaning the dearth of space pirate novels. While I can’t do anything about the lack of space pirates in novel length, maybe the book will offset the lack.

Well, that certainly made me curious. When I asked him to elaborate, here’s what he said.

I’m going to be putting together an anthology of stories about space pirates, tentatively titled Cosmic Buccaneers, though that may change, and would appreciate suggestions from Black Gate readers of space pirate stories that have warmed the cockles of their heart. (Remind me to look up “cockle,” whatever that means.) Short stories preferred, though I could take a look at novelets — but probably can’t fit more than one or two in. And no novels, of course, even a great one like Murray Leinster’s great The Pirates of Ersatz/The Pirates of Zan.

And please no submissions of new stories. This is not a new story market and I’ll have to return any such submissions unread; sorry! And thanks for your help, and while the Internet Speculative Fiction Data Base is very helpful, please indicate where the story was pubbed or reprinted.

This is definitely good news for those of us who enjoy space pirate fiction (and really that’s everybody, right?).

He’s definitely come to the right place for ideas, anyway. If you’ve got a suggestion for a previously published space pirate story that belongs in the upcoming Cosmic Buccaneers, shout out in the comments and we’ll pass it along to Hank.

Hank’s next book for Baen is the anthology Overruled! (“short think is law and lawyers in space”), scheduled to arrive in April 2020. 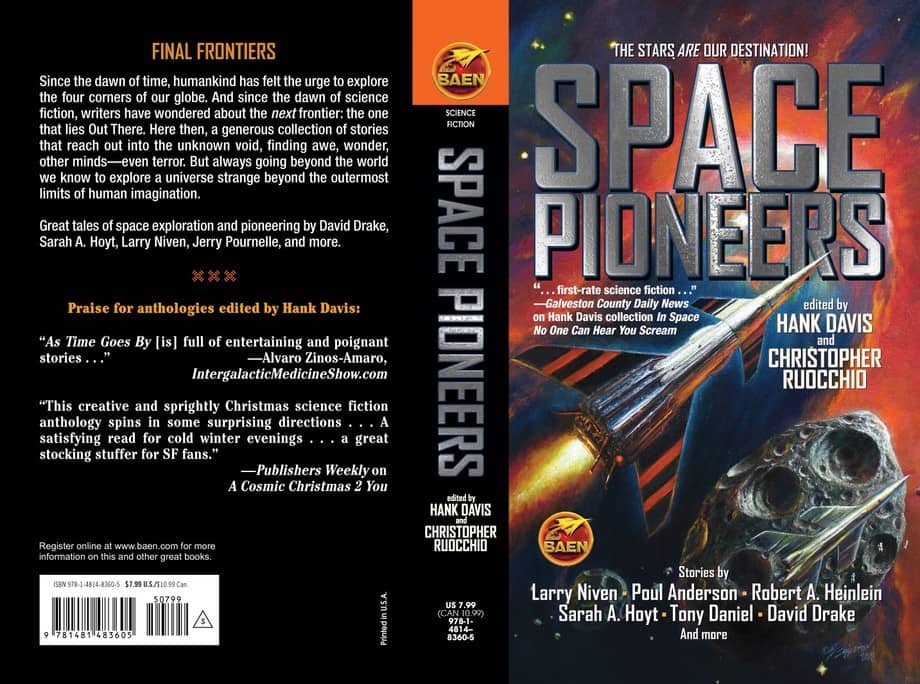 Check out the free sample of Space Pioneers at the Baen website. 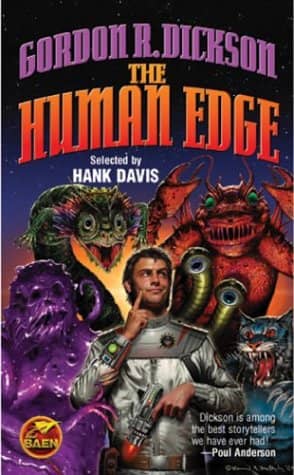 I recently tracked down a copy of The Human Edge (2003), a generous (406 page) collection of short fiction by Gordon R. Dickson, which completed my Hank Davis collection. When I mentioned it to Hank he shared a fascinating bit of history about how the book came to be,

I’m glad you got a copy of The Human Edge, since that one goes so far back that I couldn’t provide you with a copy. That was the first anthology I (though technically, it’s a collection) put together for Baen, though I’d been a silent suggestor (suggester? The spell checker doesn’t like either spelling…) for the earlier The World Turned Upside Down. Jim Baen called me into his throne room, I mean office, and said something like, “Gordon Dickson does good stories of humans outsmarting aliens. I’d like to publish a collection of his stories like that and call it The Human Edge. Do you know enough of his stories like that to fill a book?” I said, “Sure,” and went off to make a little list.

AFAIK there will be a volume II of The Best of Gordon R. Dickson, and I really should get to work on introductions for it, in case I again get a forceful reminder of my mortality…

Hank Davis has been keeping classic science fiction alive in paperback on store shelves for years, and he has assembled a veritable library of over a dozen volumes of top-notch SF. If you’re a fan of short genre fiction, you have a lot to be thankful to Hank for, including:

Oh, how well I remember the Astounding Science Fiction from February 1959 with The Pirates of Ersatz on it. I loved the cover and the story. It’s too bad Hank can’t include it, but I understand the limitations. I’m wracking (racking?) my brain for stories and so far coming up blank. Darn!

Thanks for the effort, RK. I’ll have to think long and hard on this topic, myself. A few PLANET STORIES tales come to mind, but none that really stand out.

It’s got a pirate but is more a prelude to space so I don’t know if it fits, but I’d have to include John W. Campbell’s air piracy story and first Arcot, Morey, and Wade tale, “Piracy Preferred” (Jun 1930 Amazing). For newer things, William Ledbetter’s “Broken Wings” (Jul/Aug 2018 F&SF) was pretty good. I think Alastair Reynolds’ “Galactic North” (Jul 1999 Interzone) fits. Unfortunately, I think *all* of these are novelettes. Baen usually produces big books, though, so hopefully you can talk them into giving you plenty of room. 🙂

I’ll try to think on some more stories in that narrow range between 1930 and 1999 and see if something pops into my head.

Oh, Katherine MacLean’s “Collision Orbit” (May 1954 SF Adventures) or others of her “Hills of Space” series would be good,

James L. Cambias had a nice space pirate story, “The Barbary Shore,” in Shimmer, Autumn 2007 (special pirate issue.) The interesting angle there was that both pirates and targets were robot spacecraft.

Great suggestions! I will pass them along to Hank.

Chris — great to see some more modern stories. I should have thought of the FAST SHIPS, BLACK SAILS anthology myself. Thanks for the suggestions!

I should be able to come up with a lot more when I think about it, but here’s one I remember:

He might also want to take a look at A. M. Dellamonica’s Gale Felachild stories, mostly at Tor.com — really nice nautical fantasies, some of which, as I recall, involve pirates.

I read this anthology a few years ago that was fun: Yarr! A Space Pirate Anthology (https://tinyurl.com/y5eja2g7).

There’s a story in there by Mary Pletsch that’s definitely worth a read: “The Lighthouse Keeper’s Daughter.” She’s an amazing author and the story has stuck with me this whole time. 🙂

Good luck with the antho. Can’t wait to read it!

> I should be able to come up with a lot more when I think about it, but here’s one I remember…

Thanks Rich! I was sure you’d come through. 🙂

> I read this anthology a few years ago that was fun: Yarr! A Space Pirate Anthology

That’s perfect! Another lost gem, and exactly what we were looking for. Thanks!