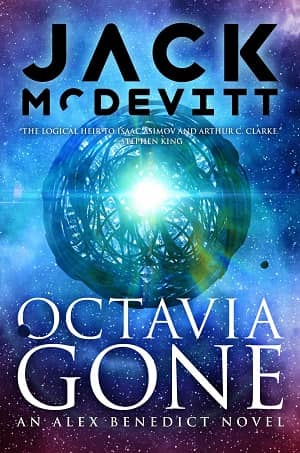 I’ve been a fan of Jack McDevitt since his second novel, the SF mystery A Talent for War (1989), the first of his long-running Alex Benedict series.

His latest is #8 in the series. Ricky L. Brown at Amazing Stories calls it “a blueprint for mystery writers”:

Alex’s uncle Gabe returns after being lost in space for over a decade, but time aboard the ship elapsed only a few weeks. In addition to dealing with his life awkwardly warping ahead eleven years, Gabe believes he is in position of an artifact that may lead to answers to the missing Octavia station. With the help of Alex and Chase, the search for answers launches into a fast-paced mystery with galactic proportions… Though this story ties into some of the elements following Coming Home, it is a stand-alone story with just enough backstory to keep the new reader involved. If this is your first introduction to McDevitt’s world of galactic archaeology, it is a great jumping in point…

Octavia Gone is a blueprint for mystery writers. Smart characters not only looking for answers, but growing from what they discover is satisfying, even if we might not like what they find.

After being lost in space for eleven years, Gabe finally makes his triumphant return to reunite with Alex and Chase and retrieve a possibly alien artifact — which may lead them to solve the greatest archaeological mystery of their careers, in the eighth installment of the Alex Benedict series.

After his return from space, Gabe is trying to find a new life for himself after being presumed dead—just as Alex and Chase are trying to relearn how to live and work without him. But when a seemingly alien artifact goes missing from Gabe’s old collection, it grants the group a chance to dive into solving the mystery of its origins as a team, once again.

When a lead on the artifact is tied to a dead pilot’s sole unrecorded trip, another clue seems to lead to one of the greatest lingering mysteries of the age: the infamous disappearance of a team of scientists aboard a space station orbiting a black hole—the Amelia Earhart of their time. With any luck, Alex, Chase, and Gabe may be on the trail of the greatest archaeological discovery of their careers…