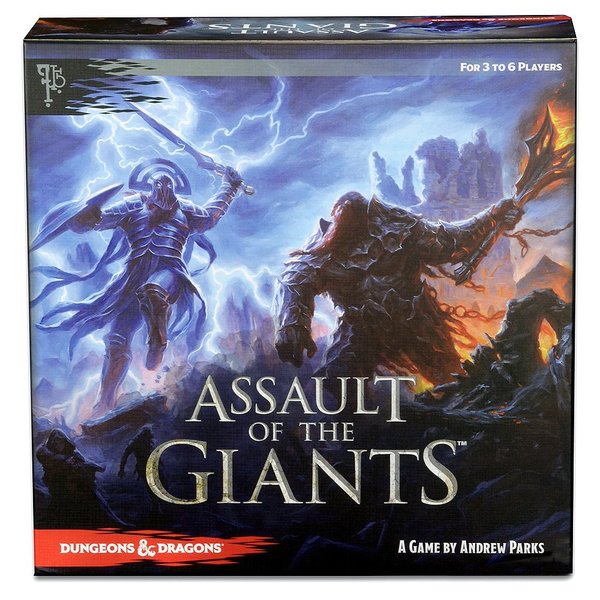 I’m pretty predictable when I shop for board games. I think I’m just trying to recreate the experience of playing Risk with my friends on lazy summer afternoons in the camping trailer in our backyard. I want to move giant armies around a board and shout “I’m attacking Kamchatka!” at the top of my lungs. The only reason I even know there’s a chunk of land on this planet called “Kamchatka” is because of Hasbro.

Anyway, in practice this means I’m drawn to pretty much any fantasy wargame with colorful components and a huge map, which looks like it could take six hours to finish. (It’s precisely because I don’t have the time to play these games any more that I lust after them so much.)

WotC’s Assault of the Giants fits the bill perfectly. It’s an ambitious game of fantasy warfare played out across a map of Faerûn, with some intriguing strategy flourishes. And best of all, it’s a game of (literally!) giant armies… how cool is that? 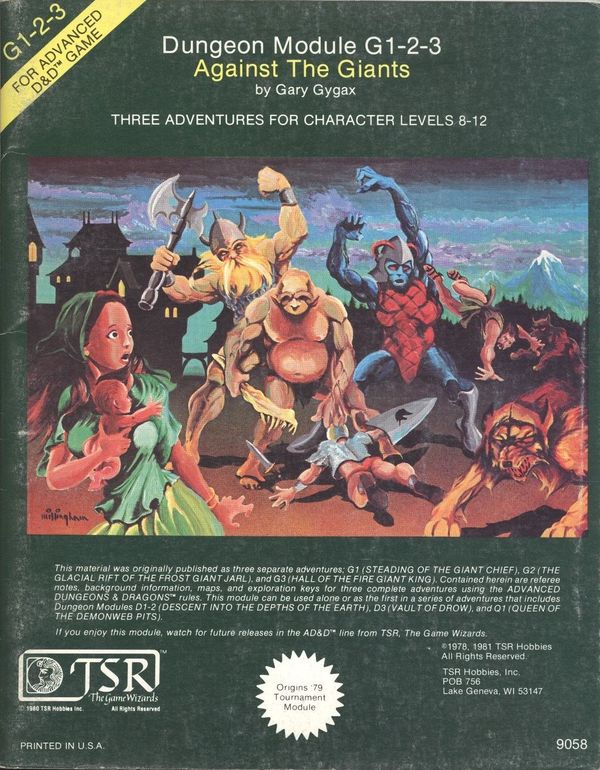 There’s no question that Assault of the Giants draws its main inspiration from the most important AD&D module, Gary Gygax’s Against the Giants, which technically predates the game of Advanced Dungeons and Dragons itself, and in many ways was the showcase adventure that fixed what the game was all about for thousands of gamers around the world. All the creative elements are there: the giant castes (hill, stone, frost, fire, cloud and storm, each with their own secret agenda) are recruiting and raising armies to wreak havoc among humankind. All that’s missing is an Eclavdra miniature, manipulating events from the sidelines.

Assault of the Giants moves the action from Greyhawk to the Forgotten Realms world of Faerûn, and adds a mythological overlay in the form of Annam the All-Father, Eldest of the Giant gods, who shatters the caste system that fixed giant culture for millennia. Players take the role of one of the castes, each of which must recruit giants to its cause, while also pursuing a secret agenda. 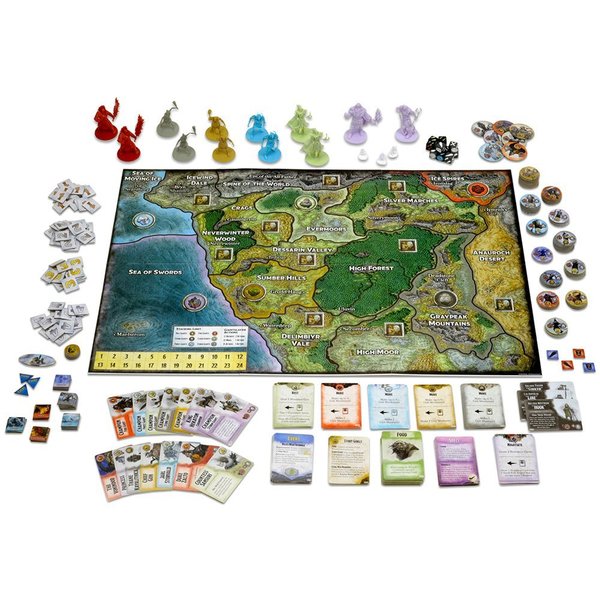 Typical for the WotC adventure games, the components — including the map — are gorgeous. This isn’t a cheap game, but the production values are worth it — including distinct giant miniatures, tokens, and sturdy full-color cards.

Here’s a look at back of the box (click for more legible version.) 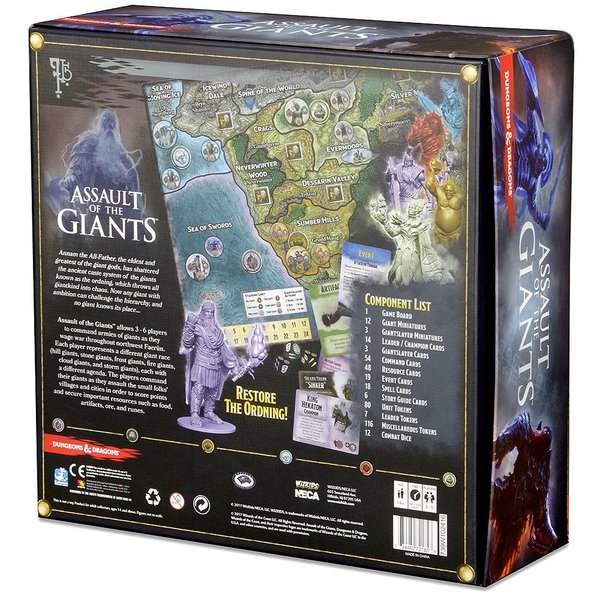 And here’s a closer look at some of the miniatures. 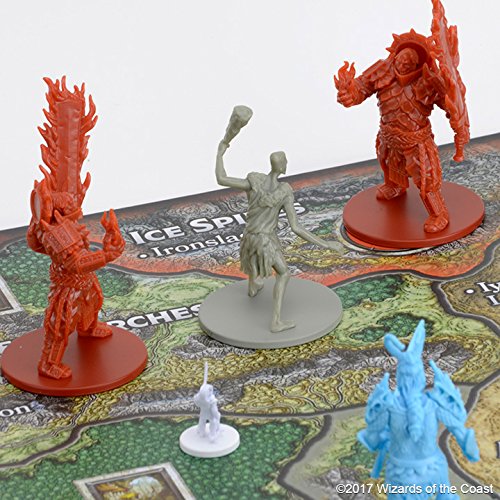 There’s also a resource component to all the mayhem, in the form of food, artifacts, ore, and runes, that adds to the strategy.

There’s a definite appeal to stepping into the shoes of one of AD&D‘s iconic giant races, and setting out to conquer huge swathes of territory by stomping around the map smashing enemies. The core premise of this game will appeal to any old-school gamer with fond memories of battling giants in the Glacial Rift of the Frost Giant Jarl and the Hall of the Fire Giant King.

Assault of the Giants was designed by Andrew Parks and published by Wizards of the Coast. It was published in 2017, and retails for $79.99. See the Game Board Geek listing here.

Never played one of the D&D board games, but they look super cool, and heard nothing but good things.

Wait, no, I played Lords of Waterdeep which was awesome. Highly recommended with the expansion.

ilgiallomondadori –
The ‘Wrath of Ashardalon’ link above goes to a post I wrote on the D&D board game series.
The ‘Temple of Elemental Evil’ one is a play through I wrote up – with pictures.

My gaming group just played the latest installment, Tomb of Annihilation, last night. It’s similar to the prior games in the line.

O’Neill: “. . . he most important AD&D module, Gary Gygax’s Against the Giants, which technically predates the game of Advanced Dungeons and Dragons itself, and in many ways was the showcase adventure that fixed what the game was all about for thousands of gamers around the world.”

Spot on commentary John! There are a lot of early D&D fave modules, like Village of Hommlet and Keep on the Borderlands. But I don’t think anything captures early quite D&D like the classic Giant module.

> I don’t think anything captures early quite D&D like the classic Giant module.

Couldn’t agree more, James. Most folks don’t remember that, when the first of these modules were released, everyone was playing original D&D (the rules that came with the first boxed set) or, in my case, Basic D&D, using the streamlined rules edited by J. Eric Holmes. Along comes Gygax trying to sell us all on upgrading to an expensive set of hardcovers for something called “Advanced Dungeons and Dragons,” when we were already delighted with what we had.

What got us excited to switch to AD&D? It was these modules, where the level of play was far above anything seen before.

Hmmm … Had not realized that this wasn’t another Wrath of Ashardalon-style dungeon crawler.

I still have my original separate G1, G2 and G3 modules with the two-color cover art.

I own the one pictured above with the Bill Willingham painting on the cover.

Has anybody here actually played this game? It doesn’t really grab me, but I’m open to being convinced.

What? Why don’t I know about that? This is your fault, Byrne!

> but I’ve already got three Pathfinder Card game base sets that are mostly collecting dust.

Dust isn’t an issue if you leave them in the shrink wrap. :p

> I own the one pictured above with the Bill Willingham painting on the cover.

I think that’s the only one I DON’T have… like Joe, my copies are well-worn G1, G2, and G3 originals.

Wasn’t there an intermediary version where they combined G1 & G2 but kept G3 separate?

And was there a perfect-bound GDQ collection? It’s possible G1 & G2 might’ve been the modules produced in the most different editions.

>>What? Why don’t I know about that? This is your fault, Byrne!

WotC already has a couple of expensive expansions for sale. Of course…

> Wasn’t there an intermediary version where they combined G1 & G2 but kept G3 separate?

You’re thinking of D1 and D2, which were combined as Descent Into the Depths of the Earth when G3, Vault of the Drow was released. Vault was huge, and it started to make those old 8-page modules look pretty slender by comparison!

> And was there a perfect-bound GDQ collection?

Yes — Queen of the Demonweb Pits, which included G1-G3, D1-3, and the big capstone module Q1… which wasn’t written by Gary Gygax, but by David C. Sutherland III.

Never did get the full story on that, but I believe Gary said in his intro to Q1 that his design was just too similar to his own work on Temple of Elemental Evil, and that he was very taken by the design of Sutherland’s dungeon (a series of overlapping interdimensional planes), and he invited Sutherland to write it.

Aha! Thanks for the correction! And yes, those separate editions of G1 & G2 in particular were pretty skimpy.