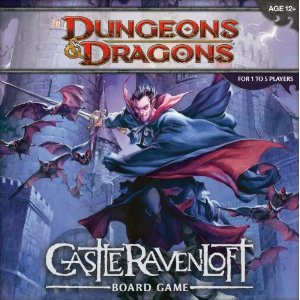 I recently received a copy of Castle Ravenloft and I wanted to take a moment this Saturday to talk about it. Not that I’m looking to pitch or anything, but I’ve had the chance to play several of the ‘big box’ games rolling off the presses this year and it’s been kind of fun to compare what I’m seeing with each.

To me, Castle Ravenloft is a bastion from my youth, a place where I went only because I was dragged there by my DM, Mark, as a particularly creepy and nasty torture for my Dungeons and Dragons characters.

When I had the chance to crack the seal on this newest piece of the Ravenloft legend I was immediately taken back to my youth while also being brought forward in time to the newest incarnation of D&D thought up by the creative minds of Wizards of the Coast.

First off, know that this is a HUGE box, and as I started pulling stuff out of it I kept getting flashbacks to GenCon 2011 when I was trying to put together a physical copy of King Snurre Ironbelly’s throne room for the climax of my current Against the Giants Campaign. As I walked that huge conference hall in Indianapolis I was amazed at the cost of creating a dungeon and the denizens that populate it. I mean, I could have spent my entire budget trying to do it, and yet this box held four times the quantity of stuff I would have needed to run a successful dungeon.

Castle Ravenloft is like a dragon’s treasure trove of dungeon tiles [41 of them], miniatures [42], and countless status markers, treasure, items, and other such things. It was amazing and in the end almost tiring to snap all these things out on the initial opening. At the price these items sell at individually, you’re basically stealing from WotC if you buy this game. 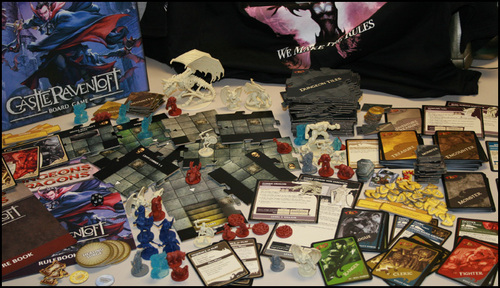 As a thrifty player and DM, I’m always looking at multiple uses for any product I invest in, and Castle Ravenloft is a perfect addition to any gaming collection because it can be repurposed for any number of outside game adventures.

Now, having said that, I want to be clear that I’m taking nothing away from the game design itself. Having played tile based games before, I can tell you how fun they are, creating the map as you go without ever knowing what comes next. It adds a whole new level to the ‘adventure’ of it all, and it helps keep each game fresh.

Ravenloft follows this model and it pays off in spades, each tile well rendered and lurking with a nice feel of ‘creep’.

Another interesting note for me personally is that there are five characters to choose from, all based on D&D 4th Edition. Now I’ll admit I’ve never played 4th edition, but that’s not to say I’m a complete beginner where new gaming systems are concerned. So, with an open and fun-loving mindset I got to have my first real experience with the mechanics of this system as I played the game.

It’s truly an interesting way to create the game and to watch as the players gain experience as they move about the board. I have to give the designs props for creating a fresh version of an old concept and if you’re looking to have a few hours of fun on a weekend night, I highly suggest getting involved with not only Castle Ravenloft but also the two other games recently released in this fine series by WotC.

As always, I hope you enjoy, and good gaming.

[…] number of innovative and successful titles, including Lords of Waterdeep, The Legend of Drizzt, Castle Ravenloft, and many […]

[…] issue of Gygax Magazine. I also met the friendly folks at Faster Monkey Games, and bought a copy of Castle Ravenloft from the Noble Knight Games booth, which was stocked with a wonderful assortment of new and […]

[…] System Cooperative play board games along with other games such as The Legend of Drizzt and Castle Ravenloft. Release Date: April 30, 2015. US Price: […]

[…] issue of Gygax Magazine. I also met the friendly folks at Faster Monkey Games, and bought a copy of Castle Ravenloft from the Noble Knight Games booth, which was stocked with a wonderful assortment of new and […]