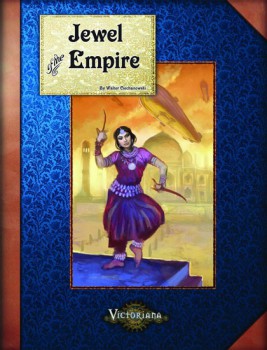 Jewel of the Empire

My one big lament about Victoriana is that they haven’t yet created supplements for American-based settings. Still, the game is created in Britain, so I can understand their hesitation and desire to keep a British focus on the game. But the game is certainly no longer fully Euro-centric, since they’ve now released a fairly comprehensive supplement about India, the exotic jewel of the British empire.

The game is set in 1867. Gandhi wasn’t born until 1869, so India is still firmly under British imperial rule, and will be for decades to come. This regional supplement provides everything that the Gamemaster and players need to know about India in order to begin involving it in the campaign, either by directly traveling there or by having characters and plotlines with ties to the region. The book contains a good mix of historical accuracy and creative extrapolation based upon the fantasy setting. And the artwork is good, as demonstrated in this YouTube trailer for the book.

There are also some rule variations for India. For example, the Beastmen of India are not consigned to only the lower classes, but may be of upper class and even nobility and royalty, and a new race, the snake-based Naga, are introduced (distinct from Beastmen).  New magical powers are introduced as well as various combat variations, reflecting different approaches to spirituality, mysticism, and militarism within Indian culture.

Of the three supplements I’m discussing, this is definitely the “must have.” The other two have some cool NPCs and plot hooks, but a good Gamemaster can come up with the story without too much trouble. The setting information contained in this book is much more valuable, providing a springboard for the imagination to go in new directions beyond the normal confines of the British setting. If you can only afford one of the Victoriana supplements, Jewel of the Empire is the one to get. 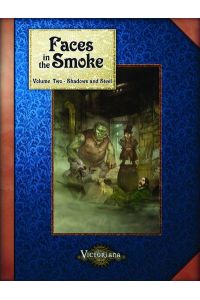 Faces in the Smoke, Vol. 2: Shadows and Steel

The first Faces in the Smoke volume introduced a number of secret (and not-so-secret) societies to involve in the campaign setting, including some which are tied into the Mars invasion plotline which is culminating in their (supposedly) upcoming War of the Worlds supplement. But the war isn’t here yet, so this new batch of 12 organizations will do well to keep players and gamemasters occupied until then.

While the first book focused on more academic and occult organizations, these new groups are ones that beckon more for men (and women) of action than of study. There are adventuring groups designed for both fun and profit as well as militant groups, such as the wyvern riders of the Phoenix Squadron to a papal-sanctioned society of vampire hunters. The final chapter of the book gives some ideas about how to create street gangs for your setting.

The players can read quite a lot about the societies, but the really good stuff is hidden away in Chapter 5, for Gamemaster eyes only. I often find that these sections don’t really contain that much useful information that hasn’t been given away already, but there’s a good balance of material here with enough open-ended plot hooks to keep stories going for a long time.

The book, like the first volume, also contains some guidelines to create new societies and organizations as needed to fit within the individual campaign. Even in volume 1, there wasn’t really an outright mad scientist organization (though the League of Logical Utopians may do in a pinch), so I did play around with it a little bit to create one. You can certainly create groups without these guidelines, but they do help focus your thinking on what you want the group to achieve. (Of course, as any Gamemaster knows, the players will completely destroy all your plans anyway.)

This collection of three fun little three-act adventures serves to introduce the Victoriana setting and various NPCs. The adventure manual includes statistics for the Havering family, who can be the player characters or just run as NPCs to fill gaps in the balance of the group. The diverse groups of other NPCs can also be worked into your campaign, even if you don’t choose any of the exact adventures provided in the adventure supplement.

A book like this is useful for a Gamemaster to have on hand, though, in case they run out of things that they’ve planned for and need to give the players something to do in a hurry. These are generally simple one-off adventures that can provide useful distractions while planting the seeds for more wide-reaching story arcs. Of the supplements, this is certainly the least essential one for a creative Gamemaster, but can still prove useful, especially if you’re looking at running a long campaign that will likely hit some rough patches that will need filler adventures.

Finding copies of the game is, unfortunately, not particularly straightforward. The publisher is in Britain and it looks like hardcopies don’t seem to make it across the pond all that often (although Cubicle 7 always has a nice showing at GenCon, which is how I learned about them). The easiest way to get these sourcebooks is probably through RPGNow, though you can hunt around and find copies of the Victoriana core rulebook on Amazon.com. You can also order copies directly from the publisher, but they sell them in pounds and I’m sure there are conversion rate and shipping issues. My suggestion, if you really want hardcopies of some of the supplemental books, would be to check with your local gaming store to see if they’re able to get a copy through their distributor.


Andrew Zimmerman Jones is a writer of fiction and non-fiction. He has been a finalist in the Writers of the Future contest and received Honorable Mention in the 2011 Writer’s Digest Science Fiction/Fantasy Competition. In addition to being a contributing editor to Black Gate magazine, Andrew is the About.com Physics Guide and author of String Theory For Dummies. You can follow his exploits on Facebook, Twitter, and even Google+.

[…] on steampunk in games (upcoming board game The Kings of Air and Steam and the roleplaying game Victoriana), but it’s time to dive deep into the literary end of the pool, and there’s nowhere […]