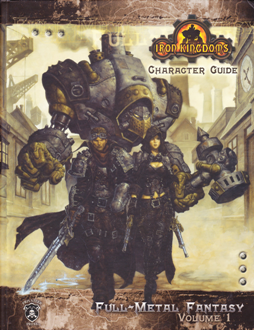 Kings of Air and Steam

Steampunk certainly doesn’t need magic, and many games adopt the steampunk aesthetic without throwing magic – or even much fantastic science – into the mix. One such project is the board game Kings of Air and Steam. This is a new steampunk-style game that I learned about the game when it was reviewed over at Wired‘s popular GeekDad blog. It’s currently in production by Tasty Minstrel Games and is being funded through a Kickstarter project.

For those who haven’t yet experienced the fun of Kickstarter, it’s part of a new way of getting investment capital through “crowdfunding” a project. Tasty Minstrel Games has done this once before with their deck-building science fiction strategy game, Eminent Domain.

Kings of Air and Steam is a resource-shipping game, where you fly airships around a map, picking up products at factories, delivering them to your train depots, and then shipping them to the cities where there’s demand for them. In a way, I suppose that this game fills a void left since there isn’t any steampunk-themed variant of Settlers of Catan. (Mental note: Design a steampunk variant of Settlers of Catan.)

Tasty Minstrel was nice enough to send me a promo version of the game, and I’ve got to say that even given the crude nature of the early promo – which, obviously, lacks any finalized artwork – I think that this game will hold a lot of appeal. It’s fast-paced, and there’s a rich backstory that’s been built around the steampunk setting (described on the Kickstarter page). The game was fully funded in a very short time frame, but there are several “overfunding” levels that will allow the developers to add even more complexity, including some great molded plastic miniatures.

The board is modular, coming in large hexagonal pieces that are made up of smaller hexagonal spaces. In addition to being able to lay the game out differently each time you play, this means that the board itself gets larger or smaller depending on the number of people playing, to help keep the game scaled.

The game also involves some nice strategy elements, as each player has to plan their route out ahead of time in secret by placing movement cards. Each round consists of players revealing their movement cards in sequence, then making the movement and performing an action (which consists of either upgrading ships or trains, building train depots, shipping goods by train, or performing a course correction). Though the movement must be determined ahead of time, you still get a lot of flexibility throughout play on how to proceed, based on events in the game ruining the objective that you had planned for that round.

The demand for various types of goods shifts throughout the game, with a very clear mechanic in place for the market transitions. At one point when I played the game, there was a single factory that ended up with a large stockpile of crates which were much more valuable than the crates at other factories. Both players set their course for the same factory. One of the players arrived a turn too late, finding that all of the crates had already been snatched up by the other airship! 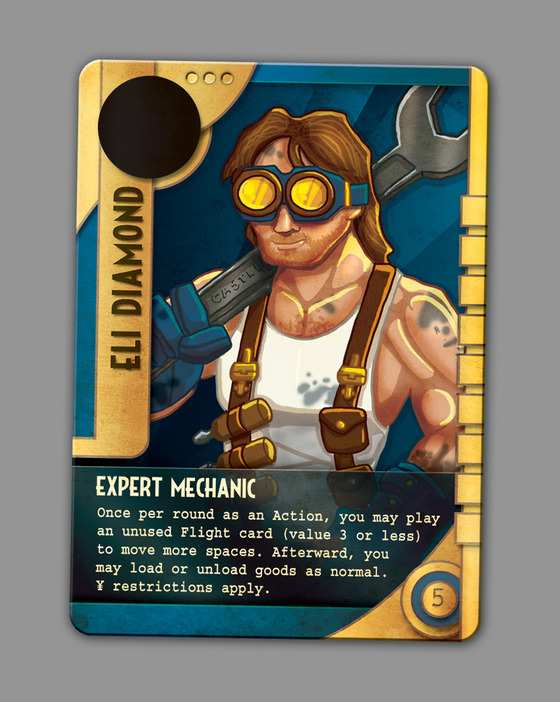 The demo version that I played was a basic game, where the different teams really didn’t have much variability. The final release of the game will have unique characters with special abilities (as shown to the right), which lends a unique flavor of play each time you play the game. The Kickstarter project is currently near the $25,000 level, at which point a seventh team (and two new characters) will be added to the game. They’re generically calling this new team “the Mafia guys,” which seems like it’ll be fun. The Kickstarter ends on Dec. 14, so I definitely think there’s plenty of time to meet that overfunding goal.

These days, I spend a lot of my gaming energy looking for games which I can play with my oldest son. Unfortunately, he’s currently just 6 years old. He isn’t quite ready for this game yet, but I expect that by age 10 he’ll be able to play it. (The game indicates that it’s for age 13+.) And, more importantly, I’ll want him to play this game. The strategy involved is useful supply/demand economics and has a much more ethical feel to it than, say, the cut-throat elitism of Monopoly, with their poor ghettos and gentrification. (I’m kind of surprised that, in the last several weeks, I never saw an #OccupyBoardwalk meme.)

The game runs six rounds (each round made up of four move & act turns per player) and then it’s over, meaning that once you’ve caught on to the style of play, it’ll go relatively quickly. There may be some patience needed with younger (or slower) players, while you wait for them to work out their movement strategy, but that’s really the case with any board game.

The only problem with the demo version game was the minimalist design, which will definitely be enhanced by the final artwork and (hopefully) having actual molded airships instead of paper placeholders.  Having looked at some of the other Tasty Minstrel games – including their last Kickstarter project – I feel confident that the final look and feel of the final game will be all that is promised. (The plastic starships created for Eminent Domain are flippin’ awesome!)

Check the game out and, if it looks like fun, go ahead and order your copy (or copies) now, to help improve the final product! Game stores can also get involved by signing up now for a Preview Night special discount.

[…] the most popular subgenres in speculative fiction today – with a review of the upcoming board game Kings of Air and Steam, currently being funded through Kickstarter. (There’s still about another day before the […]

[…] couple of Steampunk Spotlight posts, I’ve focused on steampunk in games (upcoming board game The Kings of Air and Steam and the roleplaying game Victoriana), but it’s time to dive deep into the literary end of the […]

[…] Steampunk Spotlight: Kings of Air and Steam (upcoming board game) […]