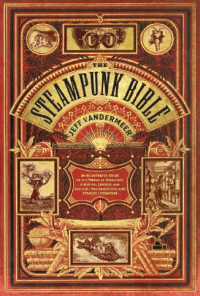 The book begins with discussions of early science fiction, from Jules Verne and H.G. Wells to the early science adventure pulp adventures, well before “steampunk” as a distinct genre would have made any sense whatsoever. This habit of tying the steampunk genre into fiction from the original period is fairly common, perhaps best symbolized by the recent book Steampunk: Poe (Amazon, B&N), which is a collection of Edgar Allan Poe stories illustrated with steampunk-themed graphics. (For more on this, check out the great analysis over at the GeekDad blog, “A Steampunk Forefather Named Edgar Allan Poe” and also “Was Poe Steampunk?” by S. J. Chambers at Tor.com.)

Next comes my favorite chapter, on the literary development of steampunk. This resurgence is largely attributed to J.K. Jeter, Tim Powers, and James Blaylock in the mid-1980’s. These authors discussed the origins of steampunk at the “Founders of Steampunk” panel at World Fantasy Convention. As with all great fiction, it was a very organic thing, with these founders just writing the things that interested them. As more and more authors began to jump on this bandwagon, it began to become a subgenre in its own right … and then came the costumes, the artwork, and the music. 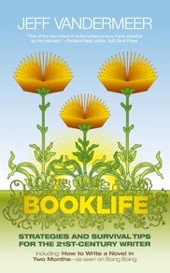 Chapters go on to focus on the artistic, musical, and film representations of the genre, as well as some great discussions of its connection to the DIY or “Maker” movement. (If I ever make a steampunk costume, it will certainly be along the “tinker” lines.)

No matter which element of the steampunk subculture appeals to you, this volume will have information to get you up to speed. For example, my interests are more of the literary style, but I love the graphics and the costumes as well, even though I have no proficiency in these areas. It never really occurred to me that there were steampunk musical groups, such as Abney Park, but now I’m intrigued to learn more and learn about their sound.

I first learned of Jeff VanderMeer through his non-fiction Booklife: Strategies and Survival Tips for the 21st-Century Writer (Amazon, B&N), which is really a must-have for any aspiring author who actually wants to be successful from a business standpoint. Shortly thereafter, I added his blog, Ecstatic Days, to my ever-growing list of authors to follow. And it was through Ecstatic Days that I ultimately learned of The Steampunk Bible.

VanderMeer is particularly suited for the task because he has edited, together with his wife Ann VanderMeer, two anthologies with the title Steampunk – Steampunk (Amazon, B&N) and Steampunk II: Steampunk Reloaded (Amazon, B&N) – as well as some other volumes, such as The Thackery T. Lambshead Cabinet of Curiosities (Amazon, B&N), which definitely dance at least along the boundary of the steampunk genre. In fact, VanderMeer’s work on these sorts of projects seem to have preceded his awareness of the massive subculture. In the introduction, he relates how the anthology led him to connect with the Steampunk movement that he examines in The Steampunk Bible:

Coming from the fiction side of things, my wife Ann and I had limited knowledge of the larger Steampunk subculture when we published our short story anthology Steampunk in 2008…. as we attened Steampunk events, an interesting cross-pollination occurred. Steampunks who had come into the fold through fashion or film and had never heard of the authors in our book picked it up to learn more about the history, while we became immersed in the subculture as we met and learned from key figures like [Jake] von Slatt.

If you want to understand the subculture of Steampunk, there’s no better place to start than with The Steampunk Bible. And, of course, if you just want to read some good steampunk fiction … well, VanderMeer’s collections are a good place to start for that, as well, or keep your eyes open and we’ll offer some more in the coming weeks.


Andrew Zimmerman Jones is a writer of fiction and non-fiction. He has been a finalist in the Writers of the Future contest and received Honorable Mention in the 2011 Writer’s Digest Science Fiction/Fantasy Competition. In addition to being a contributing editor to Black Gate magazine, Andrew is the About.com Physics Guide and author of String Theory For Dummies. You can follow his exploits on Facebook, Twitter, and even Google+.

[…] The Steampunk Bible by Jeff VanderMeer with S.J. Chambers […]