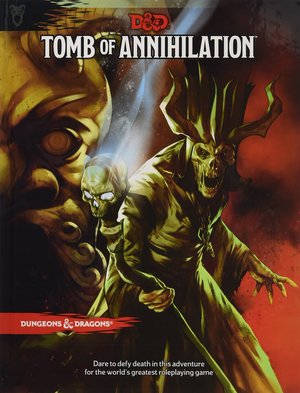 As the season of ghosts and ghouls is upon us, it’s a good time to have a terror-filled gaming experience. The most recent Dungeons & Dragons 5th edition adventure book, Tomb of Annihilation (Amazon), provides a good framework for a unleashing undead horrors upon a group of innocent fantasy adventurers.

Tomb of Annihilation is set in the land of Chult, an Africa-inspired continent setting in the Forgotten Realms. The players begin in a thriving metropolis, Port Nyanzaru, in which adventurers can race dinosaurs for fun and profit. As they move deeper into the jungles of Chult, investigating a powerful death curse that affects resurrected people throughout the world, they eventually come upon an ancient temple that is under the sway of a powerful archlich. Along the way, the players will interact with tribal shamans, zombie dinosaurs, and flying monkeys.

This isn’t the first 5th edition adventure that fits well thematically with a horror-based mood. Curse of Strahd (Amazon) re-invents the gothic horror of the Ravenloft setting, while Out of the Abyss (Amazon) explores demonic enemies spreading throughout the Underdark. The collection of deadly dungeons Tales of the Yawning Portal (Amazon) contains the chapters Dead in Thay and Tomb of Horrors.

If you’re interested in finding out more about the adventures in Chult, but don’t have time to join or run a game yourself, there are also a variety of options to watch them in video form online. The second season of the Dungeons & Dragons video series, Force Grey: Lost City of Omu, allows you to catch up on some extended play through the Tomb of Annihilation storyline, and the Acquisitions Incorporated live play from PAX West 2017 focused on the set-up of the storyline.

Of course, a full RPG adventure may be a bit much to fit in to your Halloween festivities … and if that’s the case, then you can also consider the Tomb of Annihilation Board Game (Amazon). This is part of the Dungeons & Dragons Adventure Games series, a set of cooperative games that players can play through and connect to other board games in the series, like Temple of Elemental Evil,  The Legend of Drizzt, and Castle Ravenloft.

Another new Dungeons & Dragons themed board game, Betrayal at Baldur’s Gate (Amazon), is built around the classic horror board game Betrayal at House on the Hill. Instead of playing a group exploring a haunted house, the group of adventurers are instead exploring the classic Forgotten Realms city of Baldur’s Gate. As they move through the streets, buildings, and catacombs of the city, they have mysterious encounters, building toward the reveal of one of the party members as the betrayer. At this point, the game goes from cooperative play into all of the players against the one betrayer. The game board is created by a series of tiles that are drawn randomly and the various betrayal scenarios give this game a profound level of unique replayability.

I’m currently playing the PC adaptation of Tomb of Annihilation, based on the board game. Write up coming soon..