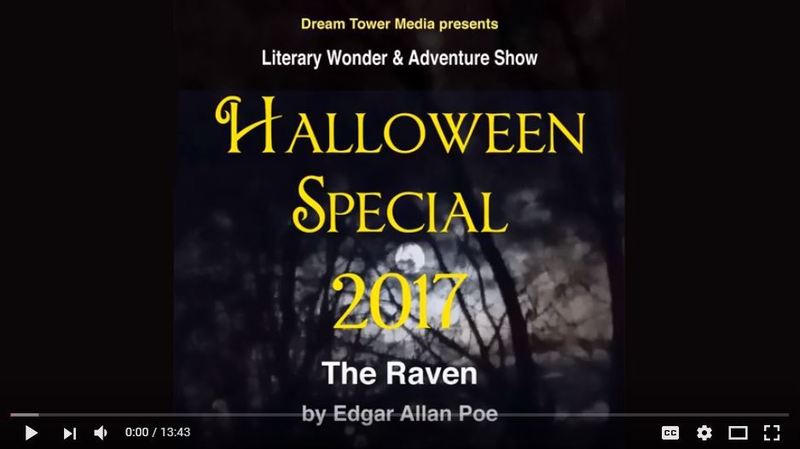 If you’re even an irregular Black Gate reader, you’ve probably seen our previous coverage of Robert Zoltan’s excellent Literary Wonder & Adventure podcast. As we’ve mentioned, calling it a podcast doesn’t do it justice, as it’s really a professionally-produced radio show set in the dimension-hopping Dream Tower (with a talking raven). It doesn’t hurt that the host has a habit of interviewing talent associated with Black Gate, including bloggers Ryan Harvey and Rich Horton, and our Managing Editor Howard Andrew Jones. My favorite previous episodes include:

Of course, if your sidekick is a raven, it seems natural that your Halloween special should be an adaptation of Edgar Allan Poe’s The Raven, one of the most famous poems in the English language, and that’s exactly what they get up to in the latest episode. The 2017 Halloween Special of the Literary Wonder & Adventure Podcast features top notch performances from Zoltan and Edgar the Raven… as well as a few surprise trick-or-treaters. Listen to the complete radio show here.

Hey, that was grand as usual.

But, but…that Halloween music was KICKASS.
Where did you get it? How can I get it?

Thanks John Hocking! I originally composed that theme for The Strand retro science fiction audio drama, which is Episode 5 of the Literary Wonder & Adventure Show. You can purchase a copy for a mere 99 cents at http://www.dreamtowermedia.com/Music

Please let me know if you have any problems with download. You can also follow the show, further audio dramas, and music, etc. by signing up for the Dream Tower Media newsletter on the site (and following us on Facebook: https://www.facebook.com/dreamtowermedia/)