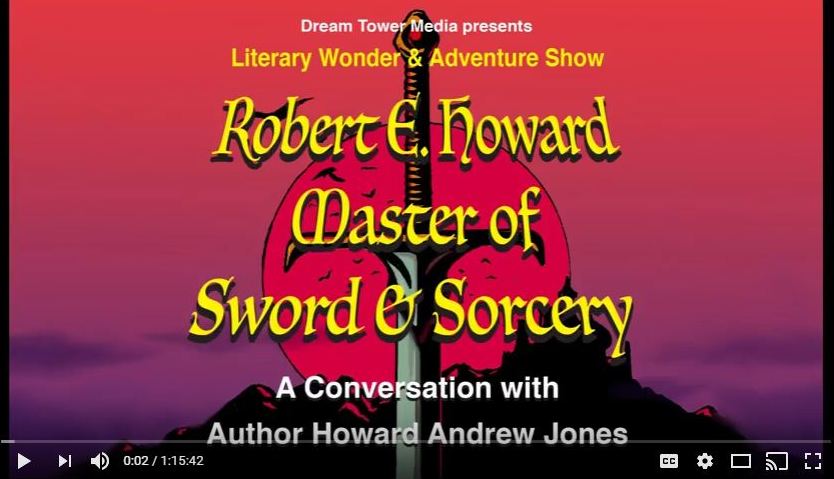 I have thoroughly enjoyed the last two audio shows from Robert Zoltan’s Dream Tower Media, a lively conversation with Black Gate blogger Ryan Harvey on Edgar Rice Burroughs, and a fascinating discussion with Scott Oden on the history and writing of J.R.R. Tolkien. So I was very excited to see that for Episode #4 the subject was the distinguished Howard Andrew Jones, author of the beloved Dabir & Asim Arabian fantasy tales, and the future bestseller For the Killing of Kings, out next year from St. Martin’s Press. The topic this time was none other than Robert E. Howard, the legendary creator of Conan, and perhaps the greatest Sword & Sorcery author of all time.

As usual, calling this a podcast doesn’t do it justice, as it’s really a professionally-produced radio show set in the dimension-hopping Dream Tower (with a talking raven). I’ve had plenty of lengthy discussions with Howard — who is the Managing Editor of Black Gate — over the years, and here he’s at the peak of his form, entertaining and highly informative. The podcast opens with a animated discussion of life in small town Texas, Robert E. Howard’s substantial gifts as a storyteller, and why he added whipping scenes to so many pulp tales. It looks at REH’s enduring creations — including Conan, Solomon Kane, and Dark Agnes — before exploring our fascination with ruins, Fafhrd and the Gray Mouser, and the influence of gaming on modern fantasy.

My only criticism is the host’s tendency to wander off topic, and repeatedly cut off his guests to talk about himself. Robert Zoltan is a fascinating guy, and I enjoy his opinions, but that doesn’t mean that a 1-hour podcast on Robert E. Howard is the right place for a 3 minute monologue on Van Gogh, or a 7-minute monologue on narcissism and how hard it is to make a living as a musician. Future podcasts should focus more on his guests, or maybe just do away with the pretense of an interview entirely. That might set better expectations with listeners.

As it happens I just finished Hour of the Dragon last night and started rereading “Red Nails” (one of my favorite REH stories) today, and I just ordered Novalyne Price’s book One Who Walked Alone from Amazon yesterday.

I’ve listened to all three of the episodes you mentioned, and I’d recommend all of them to pretty much anybody who visits this site regularly (although I don’t necessarily disagree with your criticism).

And the only reason I’m not rereading REH right now is because I finished the Del Rey Sword Woman last month.

I’ve really enjoyed each episode of the podcast. I only somewhat agree with John’s criticisms. Zoltan does give his views a lot in the podcasts, but I like that it feels more like a conversation rather than a straight interview. And since Zoltan puts these out there for free, it’s his show. I recently bought the Rogues of Merth, which is a great story, to support Zoltan even though it’s available free.

All the writers here inspired by him, how about this – just an idea I’ve thought about for years, and will be testing the waters ongoing – not doing it now and anyone else wants this idea, go ahead…

Wouldn’t it be nice to do a “Conan Unbound” anthology…?

Indie project – not tied or paying the REH estate – using only public domain stuff? No Red Sonja or Living Tarim or Bone Woman – just an alternative universe where REH lived and filled in the blanks? Like do a Kickstarter for printing and setting it up -absolute digital distribution also, stretch goals for lots of cool illustrations, etc.?

Obviously an initial goal for keeping some lawyers on retainer in case of CopyWRONG abuse for what is public domain. Since the Sherlock Holmes estate lost big recentl that should be quite doable.

Sounds interesting. I wonder, do the trademark and copyright issues surrounding Red Sonja apply to the actual REH character Red Sonya? Either way, I’d love to do a story about Dark Agnes or perhaps Bran Mak Morn. Or if we used Hyborean Age stuff, it would be interesting to write a tale of Valeria before the events in Red Nails. Conan already respected her as a warrior before then, so clearly she is worthy of stories of her own.

I agree, more Valeria would be awesome!

Where did she come from, what was her background, how did she learn to fight, what did she do after? Frankly, I think Conan treated her better in Red Nails than the Comics did, turning it into a Love Triangle with Conan versus Red Sonja – Valeria the comical Sl-t, Sonja the Prudish “Nun”… Then they did an “Elektra” on Belit, oh rather to face Great Cthulhu himself…!

Conan, while …direct… in his …romance… didn’t care at all “The woman can fight!?” nope – he was from rugged, tough hill people. Except for her long blonde hair and skinny frame and hands not rough from hard work she’d be not unusual in Conan’s homeland. Valeria had been sexually harassed all her life so she was reacting to it too much and becoming a man-hater. The story changed them both, they both learned and grew through the ordeal, much more valuable than any cursed jewels in that dead city.

John, I understand your disappointment as you expect something slightly different from the show. I am deeply grateful for the support Black Gate has shown up till now. And I am heartened by the supportive comments here. I have a much longer response I am preparing to try to make the purpose of the show clearer to listeners so that misunderstanding might be lessened. Perhaps that will help. For now, I will simply say this concerning the show: it has been very intentional that from the beginning, I have never, ever used the word “interview.” 🙂

I haven’t finished the show yet but I’ve really enjoyed it so far. The fact that massive novels outsell short stories in this day and age is very confusing.

Everyone says that people have shorter attention spans now ( I think it’s really just having more options.) you’d think that short stories would be more popular than anything else.

We actually had a good number of young readers, and many of those are discovering Robert E. Howard for the first time. So interviews like this are very helpful for them.

> I’ve listened to all three of the episodes you mentioned, and I’d recommend all of them
> to pretty much anybody who visits this site regularly

Glad to hear you enjoyed them! Robert’s shared his upcoming plans with us, and I think you’ll like his next episode.

> I recently bought the Rogues of Merth, which is a great story, to support Zoltan even though it’s available free.

Glad to hear it! I hope others continue to support Robert in the same way.

> I have a much longer response I am preparing to try to make the purpose of the show clearer
> to listeners so that misunderstanding might be lessened. Perhaps that will help.

Thanks for the response. Yeah, I think that would help at lot. As I learned from my days as a publisher, expectations are everything. You do such a great job building up your guests, it’s a little frustrating when they don’t get the chance to speak for extended periods.

Can I ask why you bother having guests at all? Listening to the last few programs, I can see that you’d have no trouble at all filling up the entire hour yourself. Well, you and Edgar, I mean.

I am a little confused by your perception, John.

The most emotionally substantive moments of the show come from the conversation between my guest and me, after we have been conversing for a time, and we both become honest and vulnerable enough to talk about emotional issues that are core to all human beings. These things come about by starting the talk about writing and our loves of literature, and then slowly move into deeper territory. With Ryan, it was his struggles with depression and how central those are to his created world of Ahn-Tarqa. With Scott, it was how writing literally saved his life. With Howard, it was his coming to terms with his heartbreak over the fact that his move beloved stories of Asim and Dabir did not sell well. These are the most emotionally powerful moments of the show, and the ones that have really moved some listeners. One cannot just skip to these moments. They begin with comedy, move to discussion of authors we love, then progress from there. By the finish of the conversation, I seek to move toward a place of hope and inspiration for the guest, myself, and listeners. And then end, again, with comedy.

From the feedback and comments on iTunes and YouTube, and the increase in my mailing list, people seem to find great entertainment, information, and inspiration from this approach. As I have from the start, I plan to allow the show to grow organically, and let it be what it seems to want to be. It won’t be perfect. But I promise I will always give all of my heart and mind and talent to everything on every show. It requires a huge amount of work, time, and creativity, but I plan on continuing it as long as it gives me and others joy. Thanks again for all the support you have shown. I understand the show will not appeal to everyone. Some people will enjoy some parts more than others (some people like the comedy stuff more than the conversations, and vice versa). I’m fine with the show being whatever people perceive it to be. Below this, I will post a one sentence description of Literary Wonder & Adventure from the Dream Tower Media site.

Thanks again for listening!

“The critically-acclaimed Literary Wonder & Adventure Show is a variety show best described as a cross between Mystery Science Theater 3000 and The Tonight Show.”

Of course, we don’t riff on movies, and the conversations go deeper than The Tonight Show usually does. Hard to come up with a good comparison. That’s the best I can do to explain to a general audience.

And lastly, I don’t think Edgar and I could carry the show by ourselves. I have a deep interest in (and, I think, an empathy with) other people, especially creative people. That passion is core to the show. It is my connection to the guests and our connection to the listeners that makes the show special. Around that core, Edgar and I (and the audience) can have some silly fun.

But I am flattered by your comment. Thank you.

Forgive the typo in my longest comment above. It should be: “MOST beloved stories of Asim and Dabir”

Thanks for the extended response. Your answer does make a lot of sense.

I still don’t think a REH podcast is the right place for a 7-minute monologue on narcissism and how hard it’s been for you to make a living as a musician, but maybe I’m completely alone in that. If your readership is growing and your fans love what you’re doing, then you can safely ignore me.