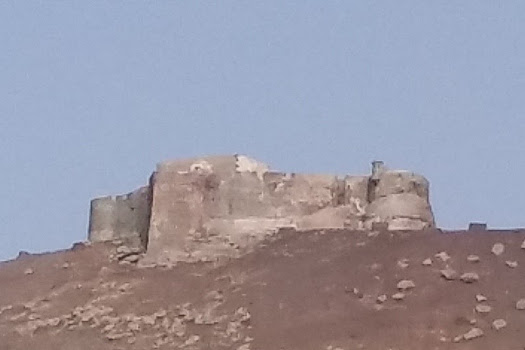 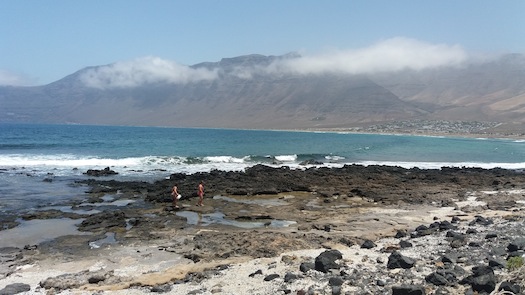 The island was originally settled by the prehistoric Guanches, who were gradually conquered and colonized by the Castilians in the early 15th century. Lanzarote and the other Canary Islands soon became a stopping point for Spanish ships sailing to the New World. All those gold-laden fleets returning from plundering the Aztecs, Mayans, and Incas of course attracted the interest of the Barbary corsairs, who regularly raided the islands to intercept the ships. They also carried off the local population to supply the slave markets of North Africa. Pirates from Spain’s European rivals joined in the fun too.

Sometimes even local boys became pirates. Ali Romerowas was born in 1640 in Las Palmas de Gran Canaria. He worked as a fisherman before being captured by Barbary pirates and sold in the great slave market of Algiers. He was bought by a pirate who was impressed with Ali’s sailing skills and soon became a pirate himself, eventually rising to become the admiral of the Algiers fleet. 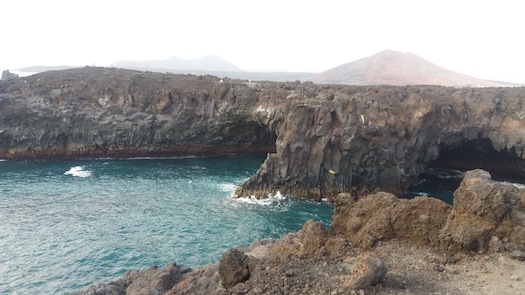 More of Lanzarote’s rugged coastline. I wonder how many ships
shattered on the rocks here? Photo courtesy MiguelTheBest (he is!)

Ali’s accomplishments were overshadowed by partners-in-crime Tabac Arraez and Soliman, two Algerian corsairs who committed the most damaging raid on Lanzarote when they landed in 1618, making off with 900 slaves and huge amounts of plunder. The islanders had seen them coming and had hidden in a cave, but some local told the pirates where his neighbors were hiding. The pirates didn’t get away with all their loot, however, because as they entered the Strait of Gibraltar they found the Spanish Navy waiting for them and suffered a serious defeat. 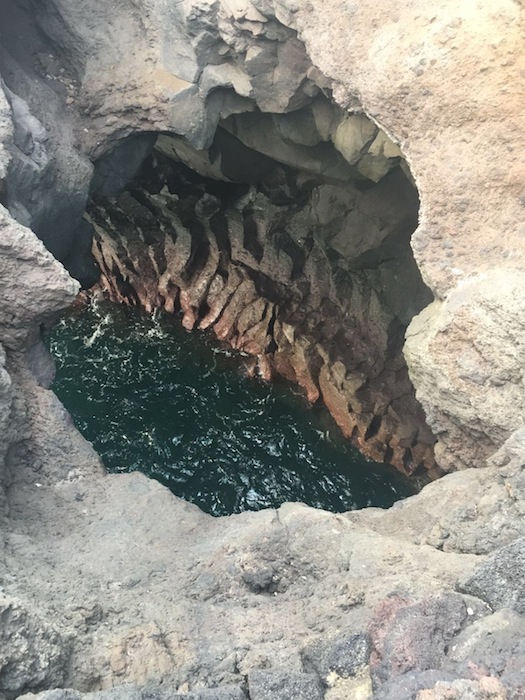 A good hiding place from pirates, assuming your neighbor
doesn’t rat on you. Photo courtesy MiguelTheBest

Now all this bloody history is in the distant past and Lanzarote is mostly a place for holidaymakers. As with the rest of Spain, the food is incredible and there are some fine local vintages. Maintaining a vineyard in volcanic soil with little rainfall is a tricky prospect, as we learned when we visited La Bodega la Querencia, a quiet little place tucked between two volcanic hills. It’s a small bodega, and yet produces two fine white wines, an enjoyable red, and an excellent muscatel. 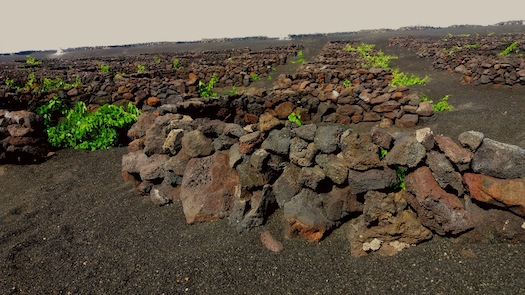 The owner sat at our table in the shady porch and explained that even though there are several springs in the valley, water is still scarce and the plants are set in little pits in the soil, sheltered by low walls in order to preserve as much moisture as possible under the harsh African sun. The technique works pretty well, and his family has been producing wine here for five generations. 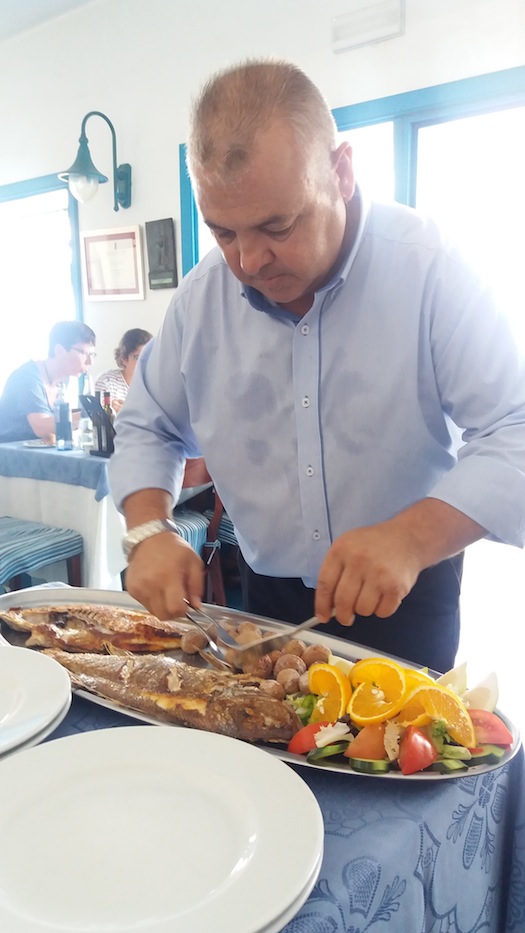 This waiter is the real reason I never made it to the Piracy Museum.
I’m only human, after all. Photo courtesy Almudena Alonso-Herrero

The only thing this trip lacked was a visit to the castle. Don’t worry, John. I might be going back in December and I’ll make a point of going to the piracy museum. Just close the swimming pool and keep that waiter away from me! 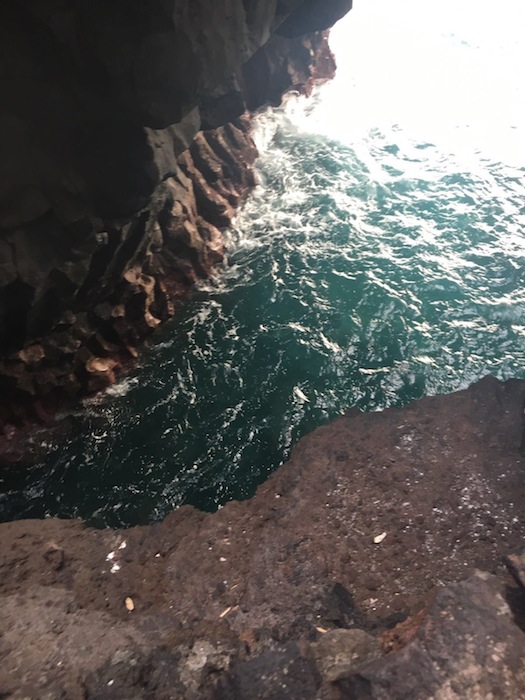 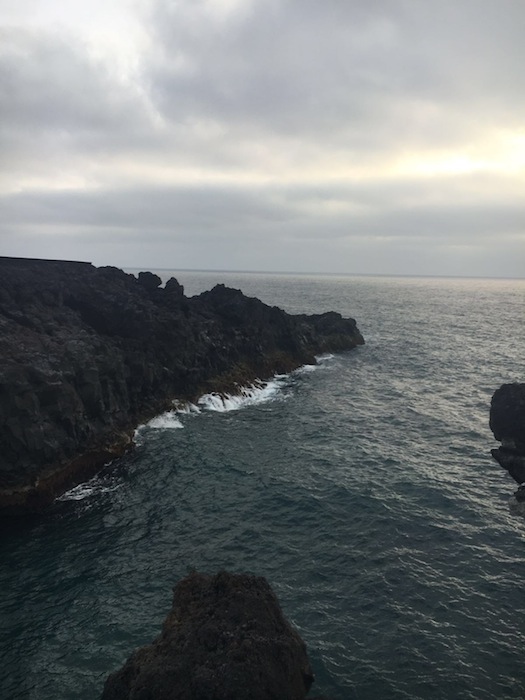 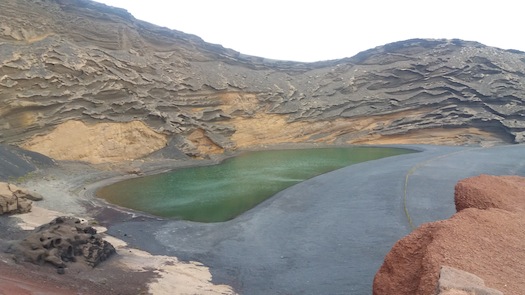 This strange lake, turned green by algae,
featured in a scene in One Million Years BC starring
Raquel Welch. Photo courtesy Almudena Alonso-Herrero

Apparently there’s a movement in the Canary Islands to reconstruct and revive the ancient Guanche religion. I wonder how public they are in their affiliations. Is it easier to return to the polytheism of one’s more-distant Canarian ancestors, or the less-distant ancestors’ piratical profession?