Despite a brief period of Portuguese rule in the 15th century, Asilah was mostly left alone and free to continue as before. They plundered merchant vessels and engaged in high-level kidnapping, their most famous unwilling guest being Prince Ferdinand of Morocco.

He and his brother, Henry the Navigator, tried to take Tangier in 1437. Unfortunately for them, they couldn’t break through the walls and were surrounded by a Moroccan relief force. Cut off and starving, the Portuguese made a deal. In exchange for being allowed to leave, they would give up the Mediterranean port of Ceuta, which they had held since 1415, and leave their weapons behind. Ferdinand gave himself up as a hostage in order to secure the deal. The Moroccans moved him to Asilah for safekeeping until the handover was complete, but once the Portuguese had safely sailed away, they began to delay handing over Ceuta. Ferdinand was eventually moved to Fez where he died, still a hostage, in 1443.

The city continued as a center for piracy and got such a bad reputation that the Austrians bombarded it in 1829, hoping to put a stop to the pirates. They failed. Asilah was eventually incorporated into Spanish Morocco in 1912 but the Spanish had little hold on such a distant city and piracy continued under the rule of the local pasha, Mulai Ahmed er Raisuni. A descendant of the Prophet Mohammed and a clever leader who was able to work Morocco’s complex web of intrigue and power struggles to his advantage, Raisuni started life as a poor bandit, stealing sheep and cattle in his rural homeland. After spending some time as a prisoner in Tangier, he graduated from sheep to people, kidnapping a string of important personages over the years and demanding hefty ransoms. One prisoner was Walter Harris, a British newspaperman who wrote several excellent accounts of his time in Morocco. Raisuni also kidnapped various important Moroccans who were foolish enough to sail within reach of his small fleet. He always made a point of treating his wealthy captives with the best hospitality.

Raisuni’s biggest capture was the Greek-American millionaire Ion Perdicaris in 1904. President Teddy Roosevelt responded with typical flair, sending warships to Morocco and telling the press, “Perdicaris Alive or Raisuli Dead!” Despite all this bombast, Raisuni got his ransom money. He also got appointed Pasha of Tangier, a post he held for less than two years before he was kicked out for corruption.

Soon he was back in Asilah and back to his old tricks. He even led a rebellion against the Spanish in 1913, a fight that ended in his army’s defeat but his continued political survival. The Europeans and Americans never caught Raisuni, and it wasn’t until 1925 that he met his fate at the hands of a Moroccan rival, Abd el Krim, a powerful leader who briefly carved out an independent state called the Rif Republic and defied the French and Spanish. In this struggle Raisuni came in on the side of the colonial powers, more out of hatred for Krim than love of the Europeans, but Raisuni was defeated, captured, and died in captivity.

After that, Asilah settled in for nearly a century of quiet obscurity, until in the past thirty years a group of artists and developers have reinvented it as an artist’s colony. The medina has dozens of galleries and artist’s studios. An annual arts festival brings people from all over the world and local artists and schoolchildren use the opportunity to cover the medina with murals, which decorate the city until the following year when new murals go up. The city walls, an old Portuguese fort, and Raisuni’s palace/castle have all been lovingly restored, and the old medina has been painted bright colors. 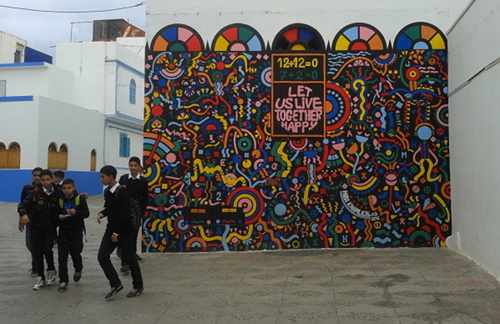 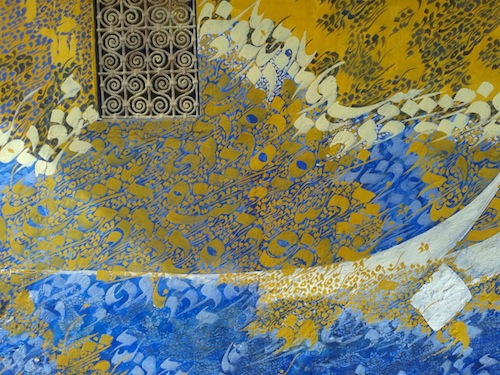 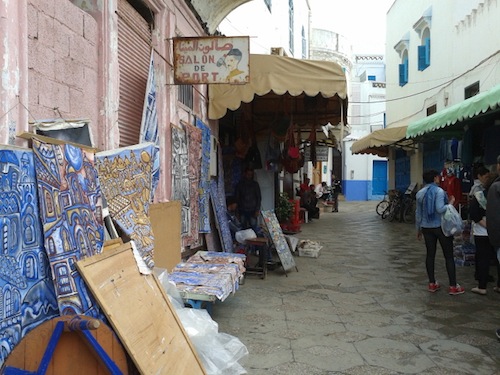 While it’s an attractive city, I felt it has been given over too much to tourism. This is a place to see and appreciate for its beauty and history, but not a place to linger. I feel far more interested in spending time in livelier, more traditional cities like Tangier or Fez. The important thing is that the kid loved it, especially when he saw two crazy Moroccan teenagers climbing up the sea wall, completely unafraid of the jagged rocks far below. I offered him a touristy camel ride on the beach, but he said no. Smart kid. Camels are vile creatures.

He did manage to discover the only video arcade I’ve seen in Morocco, though. The kid will make a fine traveler one day! 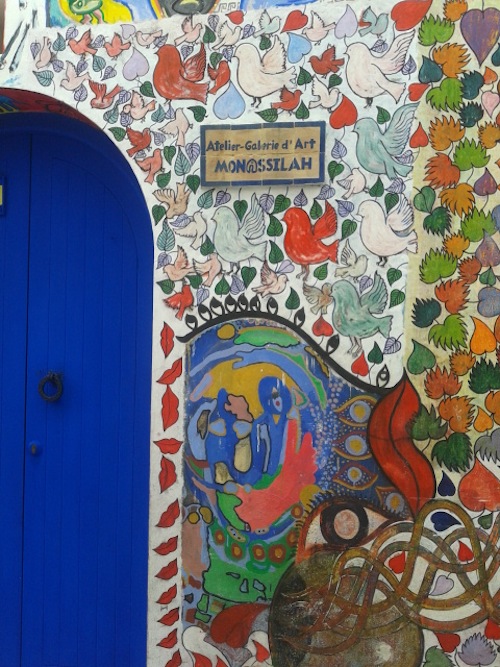 Great post, Sean! Of course, Raisuni was the hero in THE WIND AND THE LION, played memorably by Connery. Unfortunately, the real-life Raisuni was a right bastard.