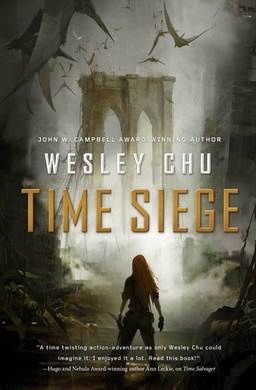 Few writers have the kind of year that Wesley Chu had in 2015. He received a contract to continue his popular Tao series with Angry Robot, announcing that the first book in a related series, The Rise of Io, would be released in 2017. And in August he won the John W. Campbell Award for Best New Writer. But the big news came in June, when Publishers Weekly revealed that Paramount Pictures had acquired the rights for a feature film franchise based on Chu’s new novel Time Salvager, with Michael Bay attached to direct and Chu set to executive produce.

Details on the film have been sparse ever since — but the praise for Time Salvager, a fast-paced time-travel adventure and the opening volume in a new series, has been plentiful. Publishers Weekly called it “Fascinating… this page-turner is a riveting, gratifying read.” And RT Book Reviews called it “Utterly captivating… to put it simply, Chu’s world-building is extraordinary.” The second volume in the series, Time Siege, was released in hardcover earlier this month by Tor.

Having been haunted by the past and enslaved by the present, James Griffin-Mars is taking control of the future.

Earth is a toxic, sparsely inhabited wasteland — the perfect hiding place for a fugitive ex-chronman to hide from the authorities.

James has allies, scientists he rescued from previous centuries: Elise Kim, who believes she can renew Earth, given time; Grace Priestly, the venerated inventor of time travel herself; Levin, James’s mentor and former pursuer, now disgraced; and the Elfreth, a population of downtrodden humans who want desperately to believe that James and his friends will heal their ailing home world.

James also has enemies. They include the full military might of benighted solar system ruled by corporate greed and a desperate fear of what James will do next. At the forefront of their efforts to stop him is Kuo, the ruthless security head, who wants James’s head on a pike and will stop at nothing to obtain it.

The digital edition of Time Salvager is a reasonable $2.99 at the monolithic online seller that needs no promotion…decisions decisions.