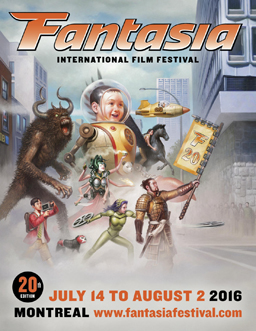 Thursday, June 14: as good a day as any to begin an adventure. I walked downtown that afternoon under looming clouds to Concordia University’s EV Building, where I picked up my accreditation for the 2016 edition of the Fantasia International Film Festival. I’d been looking forward to writing about this year’s festival for Black Gate virtually since last year’s had ended. Now things were finally about to begin. A laminated press pass, a festival schedule, a thick program book: the guide to the adventure unfolding over the next three weeks, to fantasy and horror and science fiction and a lot more.

Fantasia is a genre film festival that traditionally has a strong focus on Asian film. I’ve covered it for Black Gate both of the last two years, and I’m looking forward to doing it again, especially since this year marks the twentieth edition of Fantasia (spread over twenty-one years). Once again I’ll be posting in a diary format, covering the films I see in the order they’re shown while also reporting on special events accompanying the screenings — interviews, presentations, and whatever else comes along. I’ll try to get the posts up as quickly as I can, but realistically I’ll be seeing so many movies from now until the festival ends on August 3 that I don’t know when I’ll have time to type up my notes. There’ll probably be scattered posts from now until then, with a flood of posts following through August. We’ll see.

The festival proper began for me that Thursday evening at the De Sève Theatre, the smaller of the two main Fantasia theatres. I saw a western named Outlaws and Angels, which intrigued me since one of the leads is surnamed Eastwood. In this case, that’s Francesca Eastwood, daughter of Clint. I thought the casting choice was fascinating, and was also struck by writer/director J.T. Mollner’s decision to shoot the movie on 35mm film. I wondered how these things would work out; and besides, the only other movie showing at the same time was Kickboxer: Vengeance, a relaunch of the Jean-Claude Van Damme series from the 80s. Having seen the first three seasons or so of Community, I knew I’d only be able to think of that movie as Kickpuncher. Outlaws and Angels seemed like the clear choice. 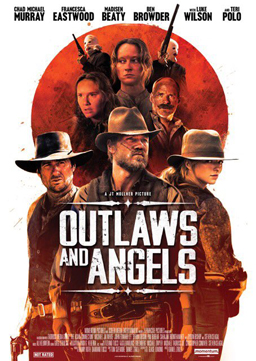 Well, I’ve been wrong before.

The plot’s simple: a group of outlaws led by Henry (Chad Michael Murray) rob a bank, flee, and end up taking over an isolated farmhouse, the home of a minister (an unrecognizable Ben Browder, who tries his best) and his family. Meanwhile, a mild-mannered bounty hunter (Luke Wilson) and his men try ineffectually to track the outlaws down. At the farmhouse, family tensions emerge as one of the daughters, Florence (Eastwood), draws closer to Henry.

From its opening moments the movie tries to set a tone with bloody violence. At the farmhouse, in particular, sexual violence emerges as a theme. Once, this sort of thing might have characterised it as a revisionist western, along the lines of Unforgiven. But Unforgiven’s almost a quarter-century old now, and Outlaws and Angels really brings nothing new. Whatever its intention, it ends up as at best a kind of nouveau-pulp, straining after the lurid and the graphic.

Which actually makes it sound like more fun than it actually is. If it had more wholeheartedly embraced a lowest-brow aesthetic it might have qualified as some kind of success. Instead I was constantly surprised by how the movie seemed to pull its punches — to back away from the most disturbing possibilities. The result is a weirdly tepid film, with blood and rape neither transgressive nor credible nor dramatically interesting.

It is in fact the sort of film that leads one to meditate on the nature of rape culture; not the nineteenth century frontier culture we see on film, but the present-day culture that led the filmmakers to think this movie was a good idea. One of the rape scenes at least, in which one of the supporting outlaws assaults the mother, is utterly pointless, in that if it were removed from the film I don’t see that it would affect the characters or plot in the slightest (it also struck me that it’d be easy to read as suggesting the mother took pleasure in the act, but I’ll assume the film’s not that stupid). If you squint, you can see a couple of things unlike most exploitation films — male characters are violated or threatened as well as the women, and there’s no female nudity. You might think that this falls well short of a real thematic exploration of form or subject, and in my opinion you’d be right. 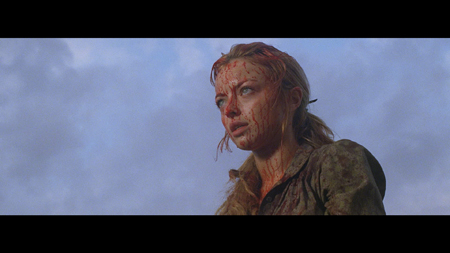 There’s an odd kind of pretentiousness in the film, a failure to reach the level of transgressiveness at which it seems to aim. At its most lurid and surprising there’s no cruelty you wouldn’t see in, say, A Game of Thrones. Married to that lack of imagination are failures of craft, on both visual and structural levels. The lighting never evokes the character of candlelight, while a supposedly moonlit swim is drenched in unlikely brightness. The soundtrack skips distractingly from genre to genre, never building atmosphere or supporting the action. The country the characters ride through is always visually uninteresting. Shots linger without being involving. External shots of the cabin where much of the film’s action takes place emphasise a nearby church which never takes any meaningful part in the story, while contributing no interesting symbolic freight.

More crippling are the structural flaws of the film. The idea here is simple — outlaws take a family hostage, hilarity ensues, survivors leave — so it’s astonishing to see how poorly that narrative is put together. Some of that comes from the lack of credible character. We watch a bunch of caricatures in this movie, and with the arguable exception of Browder, none of the actors are able to make that involving. I think in large part that comes from the absence of dramatic tension. In most Westerns I’ve seen, six-shooters are used to up the stakes and drive the tension: men and women with guns challenge each other. That’s not the case here. In this movie, there are people with guns and people without guns and the people without guns have to do whatever the people with guns say. It’s oddly linear. There are no surprises in this movie, no characters who subvert or unexpectedly seize control of a situation, no plot twist that isn’t highlighted well in advance. 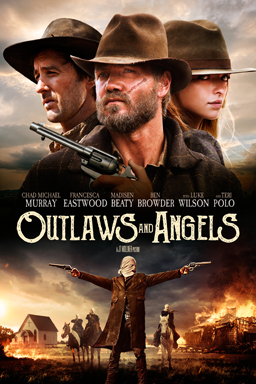 Once the movie finally leaves the farmhouse, it staggers around desperately trying to find an ending. And mostly fails. Subplots peter out without payoff. Finally the filmmakers fumble one of the most basic rules of the form: a character finally rides off into an unearned sunset and one thinks, ah, at last, it’s over … whereupon the movie promptly cuts to another scene. It’s a fine thing to challenge the conventions of a genre, but to do that effectively you have to understand those conventions and how they work. Otherwise, as here, you end up with something that looks like mere sloppiness.

One can go on. The dialogue aims at trying to build a distinctive style through the use of slang, and fails to catch the lyricism, the Old West feel, or the artful anachronism of Deadwood — or, for that matter, of Firefly. The use of 35mm film stock occasionally creates an interestingly scuzzy look, a frame filled with grain, but mostly seems pointless. Except that it gives one the chance, rare in this digital century, to see a literal waste of film.

Outlaws and Angels is too dull to qualify as being so bad it’s good, and far too bad to actually be good. Any attempt to make a serious statement about morality (the subject of plangent opening and closing monologues delivered by Wilson) or gender or violence is undercut by the film’s own witlessness, and eagerness to use sexual violence in the service of exploitation. Walking out of the theatre that night, one thought stayed with me:

(The second instalment in my 2016 Fantasia diaries is here, looking at a press conference and master class with Guillermo del Toro, the German suspense film The Dark Side of the Moon, the documentary on Hollywood monster-makers Creature Designers, and the science-fiction/horror/suspense film Rupture. The third instalment, here, discusses the Japanese two-film horror/science-fiction series Parasyte, the French horror faux-documentary La Rage du Démon, Adam Nimoy’s documentary about his father For the Love of Spock, and Takashi Miike’s science-fiction action film Terraformars. The fourth instalment looks at the documentary Beware the Slenderman, the Western In a Valley of Violence, and a Canadian film about invisibility called The Unseen.) The fifth looks at The Love Witch, an ironic and idiosyncratic horror/drama, and The Wailing, an epic Korean horror movie. In the sixth I review the Korean historical drama The Throne and the Polish musical tragicomedy The Lure. I round out the first week with reviews of Momotaro, Sacred Soldiers, animated World War II propaganda from Japan, The Alchemist Cookbook, offbeat American horror, and Library Wars: The Last Mission, an excellent Japanese dystopian sf/action movie.)

(I started the second week of Fantasia with the animated films Psychonauts, the Forgotten Children and Harmony, reviewed here. After that I saw the Danish experimental horror film Shelley, the excellent psychogeographic Japanese horror film The Inerasable, and the animated Korean zombie film Seoul Station. I started the next day with the Japanese science-fiction comedy Assassination Classroom: Graduation, then saw the Canadian animated film Nova Seed (along with the Mexican long-short Revoltoso), and then dabbled in some virtual reality shorts. Saturday wrapped up with the Born of Woman showcase of excellent short genre films, the Spanish science-fiction film Realive, and the British horrorish science-fiction movie Tank 432. Sunday started with the Shaw Brothers wuxia fantasy Flame of the Martial World and the Fragments of Asia short film showcase. It continued with the wonderful and intricate Japanese semi-Faustian drama If Cats Disappeared From the World and ended with the fine American superhero comedy-drama Superpowerless. After attending to errands Monday, on the next two days I saw first the uplifting American horror film We Go On, then the dry Swiss drama Aloys, and finally the exuberant French horror film Therapy.)

(The third and final week of Fantasia began with the American horror-comedy Lace Crater and the Iranian horror film Under the Shadow. On Friday I saw the Korean satire Collective Invention and the Japanese teen comedy Too Young To Die! and then on the Saturday watched the animated teen dystopia from Martinique Battledream Chronicles, the International Science Fiction Short Film Showcase, and the documentary about gamer and miniature-maker Stefan Pokorny called The Dwarvenaut. I began Sunday by watching the Korean zombie action thriller Train to Busan and the Canadian historical espionage-satire Operation: Avalanche, and ended it with the fable-like American horror movie Before I Wake and the Japanese science-fiction manga adaptation The Top Secret: Murder in Mind. On Monday I watched the excellent Polish-American post-apocalyptic science-fiction movie Embers, the absurdist French satire L’Élan, and the Mexican horror-fantasy We Are The Flesh. Tuesday brought the American indie alternate-pop-history movie The Arbalest and the Korean retelling of the Pied Piper legend The Piper. Finally, on the last Wednesday I saw the Chinese historical martial-arts movie Judge Archer, the American indie thriller If There’s a Hell Below, and the mind-altering Polish science-fiction epic On The Silver Globe. I concluded with a few scattered thoughts about what I’d learned about film and genre.)